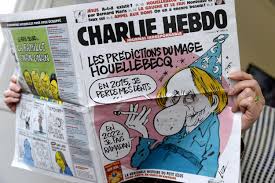 On Wednesday, at least two gunmen opened fire in Charlie Hebdo’s office in Paris, then exchanged fire with police in the street outside before escaping by car. The violence claimed 12 lives, including four of the magazine’s cartoonists.

The magazine is notorious for publishing cartoons deemed offensive to Islam. In 2011, it published a special edition, “Charia Hebdom,” with the Prophet Mohamed credited as “editor-in-chief” and featuring a cartoon of the prophet on the cover. Charlie Hebdo’s office was attacked a day before that issue was published and the publication’s website was hacked.

In 2012, the magazine once again sparked outrage across the Muslim world by running another series of satirical cartoons featuring the prophet.

The attacks stirred heated debate among social media users. Those who condemned the shooting despite their anger over the magazine’s content squared off against others who supported the attack as a natural reaction to offensive rhetoric against Islam.

Many Egyptian social media users were not fully sympathetic toward the cartoonists killed in the incident. Business intelligence consultant Ramy Mahrous, 28, told Mada Masr that he only respects non-Muslims who are respectful of his religion.

“Otherwise, I wish anyone attacking my religion to burn alive, and I would be very happy seeing him burning,” he said.

Twitter user Ahmed Adel told Mada Masr that attacking religious symbols and religion in general is a “red line,” but Muslims generally do not take serious actions against such offenses, while the offending parties “reap the fruit of their actions.”

“Islam forced us to defend our sacred principles. [The shooting] is not an attack, it is self-defense,” he argued.

Adel recounted some incidents from Prophet Mohamed’s life that he interpreted as supportive of his position.

“All of this should make us more ardent [defenders] of our religion, if we love our religion in the first place,” he added.

In a similar vein, Sahar al-Sherbiny told Mada she believes that fervent belief could lead a Muslim to kill someone offending his or her religion.

“I don’t know many details of what happened in France, but if I saw someone offending Prophet Mohamed in front of me and I had a weapon, I would verbally warn him first. If he continued, I would kill him,” she tweeted, using the word “ardency” in a hashtag.

On the other side of the debate, several social media users voiced despair over the attacks.

Ibrahim Mowafy believes the Prophet Mohamed never sought revenge against those who attacked him, “so how do we kill those who offend the Prophet now?” he wondered.

Mohamed Refaay described offenses against Islam is an empty show, merely a means for people to gain fame through controversy.

“I’m against violence, whether verbal or physical. Accepting these ideas [killing for offenses against religious symbols] is a form of religious extremism. We have to confess that we are partially responsible for this as a society, because we label these acts as a form of defending Islam,” Refaay asserted.

Strong anti-Charlie Hebdo rhetoric was also evident in the Egyptian media’s coverage of the attack. The state-owned Al-Ahram newspaper questioned the magazine’s track record under the headline, “Charlie Hebdo, a French satirical magazine: Free criticism, or provocation and blind hatred?”

Al-Ahram outlined the magazine’s history of committing offenses against Islam and the ensuing controversy. Similarly, the state-owned newspaper Akhbar al-Youm described Charlie Hebdo as “specialized in offending Islam and breaking religious taboos,” adding that it has a “long history of controversy.”

Privately owned newspaper Al-Masry Al-Youm (AMAY) focused on the newspaper’s contentious first issue of 2015 with the headline: “Charlie Hebdo’s cover — Writer known for his attacks on Islam: I will fast for Ramadan in 2022.” The headline referenced Michel Houellebecq, a writer who envisions France under Islamist rule in his new book.

The privately owned newspaper Al-Watan described Charlie Hebdo as “known for its animosity toward Islam.”

But a group of young Egyptian cartoonists may have a different take from the mainstream, perhaps because they can identify with the victims.

Makhlouf, a cartoonist for AMAY, co-wrote a report about the Charlie Hebdo incident in support of the deceased cartoonists and describing their work.

In a telephone interview with Mada Masr, Makhlouf lambasted the Egyptian media’s coverage of the attack.

“How come journalists are opposing their own cause?” he asked, referring to freedom of expression. “The Charlie Hebdo team are people, not demons.”

He recounted incidents in which he came under attack during the Muslim Brotherhood administration of 2012, when he published cartoons harshly critical of political Islam.

“People used to call me an infidel. I know people will accuse me of being anti-Islamic, but I don’t care. I support freedom of expression even when it contradicts with my religious beliefs,” Makhlouf explained.

He published a cartoon on his official webpage condemning the shooting, with a note addressing the masked assailants who carried out the attack.

“You idiotic, unknown masked gun-carrying assailant, we do not need more victims to know that you are a coward,” he wrote.

Makhlouf himself had published cartoons in Charlie Hebdo in support of the January 25 revolution.

“Charlie Hebdo supported the revolution and published cartoons from a wide range of Arab cartoonists back then,” he added.

However, Makhlouf believes that awareness is starting to grow around this issue.

“There are people who still encourage violence, but others who equally condemn it,” he explained.

Andeel, a Mada Masr cartoonist, said that after he “condemned the attacks on Facebook, a wave of criticism was immediately directed against me. But I believe those criticizing me were doing this personally; they were waiting for my post to attack me. I believe it has something to do with their prior knowledge of my views.”

But he shares Makhlouf’s analysis regarding increased tolerance for anti-religious expression.

“It’s all about exposure. People are now more exposed to the idea of freedom of expression than seven years ago, for example. Remember how angry Egyptians were after the first time they heard about cartoons offensive to Islam? I myself was outraged,” he said.

In September 2012, the Innocence of Muslims YouTube video provoked widespread anger against the United States for its offensive portrayal of Islam and Prophet Mohamed. The movie was said to have been directed and produced by a Coptic Egyptian-American living in the US. The wave of anger led to attacks against US embassies in Egypt and across the region. The US ambassador to Libya, J. Christopher Stevens, was killed in the ensuing violence.

Similarly, a racist attack on Marwa al-Sherbiny, a veiled Egyptian woman living in Germany, provoked a similar wave of rage targeting German embassies in the Muslim world. Sherbiby, who was stabbed to death by a German national, was named “the hijab martyr.” Her attacker was ultimately sentenced to life in prison for the murder.

But for Andeel, the outrage isn’t always just about religion.

“Part of this hatred has to do with the kind of feelings Egyptians are exposed to all the time. They hear about terrorism, death and violence on a daily basis in the media,” he said. “People have gradually lost their respect for and value of human life in general.”

“Imagine an oppressed Muslim deprived of all of his rights, someone who has not achieved a single success in his life, seeing armed men, in the name of Islam, killing those westerners who make fun of Islam,” Andeel continued. “It is a moment that this oppressed person wants to be part of. He strongly identifies with this utopia.”