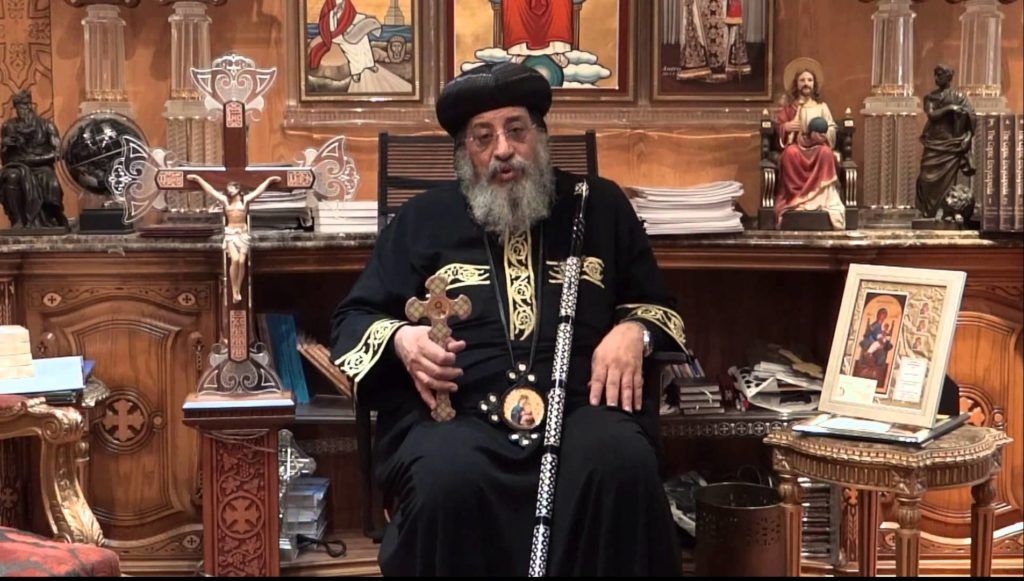 Coptic Christian activists lambasted Pope Tawadros II, the head of Egypt’s Coptic Orthodox Church, for contentious remarks, which he made in an interview with the Spanish newspaper El Mundo, published Tuesday.

In the interview, Tawadros II said he supported the recent acquittal of former President Hosni Mubarak and his officials on charges of conspiring to kill protesters in the January 25, 2011 revolution.

Despite endemic corruption in the last years of Mubarak’s administration, his tenure represented a “peaceful era” for Egypt’s Copts, Tawadros II continued, while former President Mohamed Morsi’s year in office was the worst period in the country’s history, due to the state of “political tension” it engendered.

Tawadros II went on to describe the wave of Arab revolutions in 2011 as an “autumn,” and not a spring.

However, activists were most outraged by the pope’s remarks on the deadly clashes between Coptic protesters and the Armed Forces in front of the Maspero building in 2011, which left 23 demonstrators dead.

“It is not wise to talk about Maspero now,” Tawadros II said, asserting that he did not know who was at fault for the incident, as it occurred before he was elected pope.

“We are seeking the truth, but at the suitable time,” he added.

Tawadros II also said he believed the attack against the Coptic Orthodox Church’s headquarters during Morsi’s administration was a Muslim Brotherhood plot, and denied that Interior Minister Mohamed Ibrahim had any involvement in the violence.

Police forces and Brotherhood supporters clashed with church members attempting to protect the headquarters, after a protest organized by Copts was violently dispersed by security forces.

“He [Mohamed Ibrahim] is a good minister,” Tawadros II claimed.

Activist Vivian Magdy, whose fiancée was killed in the Maspero clashes, wrote an article published on the privately owned site Yanair Gate, castigating Tawadros II for his statements.

“What about the blood of those who died? What about his blood [her fiancée’s] pouring from his mouth as he took his last breath in this life? The blood that I left on my hands for two days to show everyone … Was their blood sacrificed so the pope can talk about them as if they were nothing?” Magdy asked.

The harshest criticism came from Gamal Eid, the executive director of the Arab Network for Human Rights Information (ANHRI): “Dear Pope Tawadros II, you have my full appreciation as a religious cleric. As for your political ideas, and your talk about Maspero martyrs, it is too bad. Shame on you!” he tweeted.

Tawadros II went on to say in the El Mundo interview that he had endorsed President Abdel Fattah al-Sisi’s presidential campaign in his personal capacity as an Egyptian citizen, despite attacks against him by Coptic youth.

“Those youth lack knowledge and experience,” he claimed, adding that the church is engaged in heated dialogue with them.

Commenting on the rampant discrimination against Egypt’s Coptic population, Tawadros II said that the church is also in dialogue with the government to improve the situation.

However, George Fahmy, a researcher and Carnegie Middle East Center fellow, warned against the Coptic Church’s increasingly politicized role in a recent article.

Fahmy believes that an overly politicized stance would harm the church itself, as well as the Egyptian Coptic community at large.

“The Coptic Church has two main interests in the political sphere: First, maintaining its institutional independence vis-à-vis state institutions; and second, monopolizing the right to speak in the name of the Coptic community,” Fahmy wrote.

The Mubarak administration protected the church’s position as the sole representative of the Coptic community, and granted it institutional independence, Fahmy continued. The church was also allowed to control the personal affairs of Copts, especially in terms of marriage and divorce, which is a recent issue of contention between church clerics and secular Coptic activists, he said.

“However, the church began to lose control over some Coptic youth in the last few years of Mubarak’s rule. Continuing discrimination against Copts, which was sometimes carried out by state institutions themselves, led some young Copts to believe that the Mubarak regime was the cause of their problems; some of them asked the church to stop supporting it,” Fahmy continued.

He argued that “the church needs to differentiate between defending universal values in the public sphere and engagement in deals with the state or political parties.”