Censorship board bans movie about Moses
By
Mada Masr 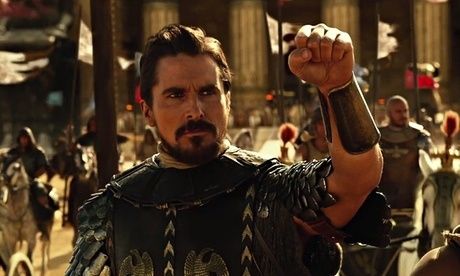 The censorship committee banned the movie “Exodus: Gods and Kings” from screening in Egyptian cinemas, due to historical inaccuracies and its personification of the prophet Moses, according to chairman of the board Abdel Sattar Fathy.

The American film, directed by Ridley Scott, features the star of Batman Christian Bale, depicting the story of the Prophet Moses and the biblical account of his battle against Egyptian king Ramses II.

Privately owned Al-Watan newspaper stated on Thursday that the censorship committee claimed the movie fabricates historical facts. It may also be banned in Morocco for similar reasons.

Fathy told the newspaper that the movie contains misleading information, including that the Jews helped build the pyramids and are God’s chosen people.

“The movie portrays Egyptians as barbaric people who tortured Jews,” explained Fathy, who also raised issues concerning the film’s depiction of God as a child.

He added that the film shows Moses as a military leader, as opposed to a prophet, explaining that Islam opposes the depiction of prophets and their faces.

Citing religious scriptures, Fathy maintained that Moses led the Jews out of captivity in Egypt by using his rod to part the waters of the Red Sea. However, the movie is said to depict this exodus as the result of an earthquake that hit Egypt.

Cecil B DeMille’s film, The Ten Commandments (1956), staring Charlton Heston as Moses, also dealt with the biblical account of the exodus, and was the seventh most successful film ever at the box office.

In March, Al-Azhar demanded the ban of the US blockbuster Noah, starring Russell Crowe, due to its personification of the Prophet Noah. However, the censorship board cleared it for screening the following month. The movie depicts the end of the world, Noah’s Ark and the saving of humanity.

It seems the controversy hasn’t put Scott off tackling Biblical subject matter, as reports suggest he is planning to produce a film about David and Goliath next.

Topics
Related
Ahmed Awaad
Cairo court overrules PM’s decision to ban Halawet Rouh film
Pesha Magid | A Cairo court ruled on Tuesday against the Cabinet’s decision to ban the film Halawet Rouh (Rouh’s
Ahmed Awaad
Q&A with Egypt’s head of censorship, Ahmed Awaad
Maxa Zoller | An interview with filmmaker Ahmed Awaad, when he was the head of Egypt’s censorship board in 2014.
Armed Forces
A dab hand: Straight from rifle to heart
Andeel | I listen to the same music you listen to, we have similar taste in women, I’m as ugly as everything