Rana ElNemr is known for her photographs of abnormalities of urban Egypt, detached from their surrounding context. Beautiful, they invite us to investigate nameless, dissected environments, often devoid of human presence.

For its third event, after a show by Malak Helmy and program of events alongside Hassan Khan’s D-CAF show, AUC_LAB brings ElNemr to the spotlight at Sharjah Art Gallery, in a solo exhibition of new work that represents a significant development on the work shown at her 2012 show at Townhouse, Giza Threads.

Titled Assembled in Streams of Synonyms and curated by Maha Maamoun, it features photographs, videos, sound, text and one sculpture. The Sharjah Gallery’s two-story space requires from artists and curators an extra flexibility: It is labyrinth-like and rigid, limiting the possibilities for rearrangement, and the acoustics complicate the display of sound-based works. But ElNemr and Maamoun have managed to create a logical, natural flow.

Upon entering, we find ourselves inside an octagonal room. Two large-format photographs hang in a corner, each framed under glass in roughly solid, painted wooden frames, billboard-like. Map shows a hand-drawn map of a garden, spread out in a room, next to a window we can see out of. The Dictionary of Imaginary Places shows Alberto Manguel and Gianni Guadalupi’s book of the same name, standing upright, alone on a shelf. In both, natural light plays on surfaces. 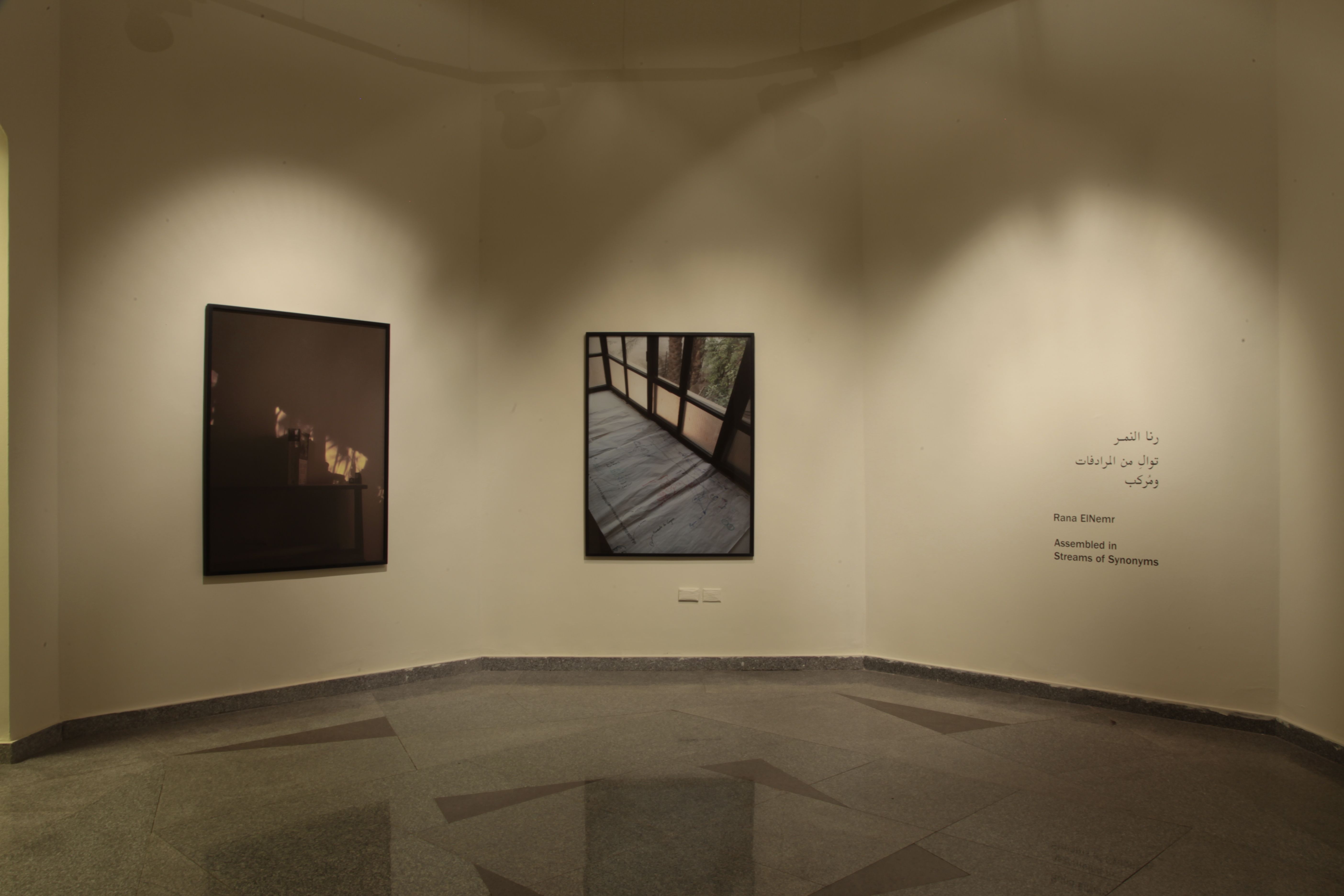 The rest of the room stands hollow, and we are left curious to continue into the adjoining space. Here, wallpapered onto the wall facing us, a large dim photograph shows a villa, with lights on inside and against a dusky sky, seen through the trees and plants of its garden. Its title is It became known that King Mariut now has a library.

In an opposite corner a hazy, almost black-and-white video (transferred from 16mm film) is projected. The Shaft is only 24 seconds long, and shows birds (possibly pigeons) taking off and landing against a dark bluish sky cut through at the very bottom by telephone wires. Right next to it, a freshly welded street-light, possibly life-size, rises up to the second story. One light faces downward as expected, adding another light to the already will-lit space, but a second light veers upward on a pole that then bends over itself, plant-like. 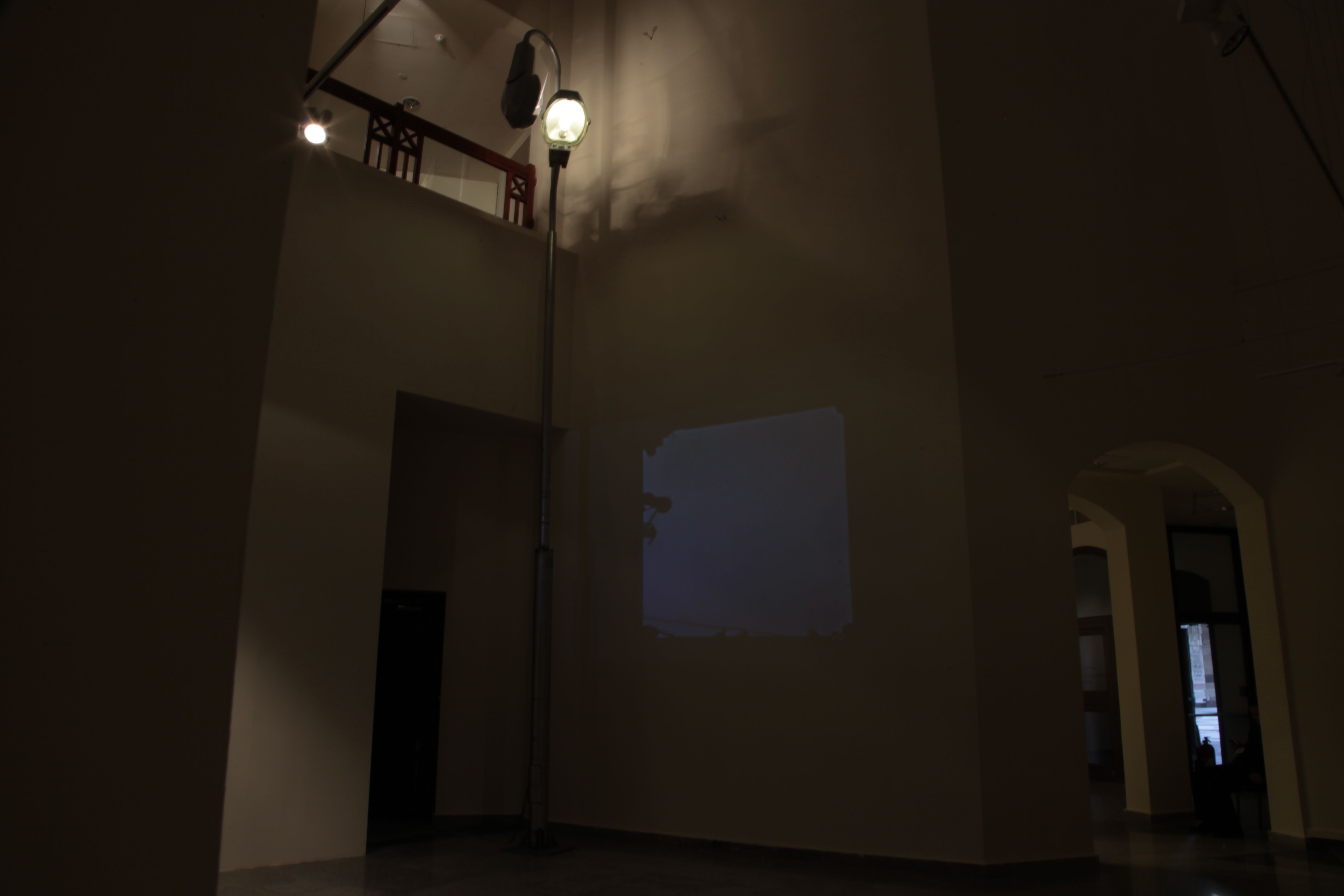 The overall effect is a bit like being outside — the streetlight, an enigmatic projection of the sky, and large weather-proof images. This suits the marbly, corridor-like gallery space, which seems as if it was built to move through on your way to somewhere, rather than to linger or sit.

Curious again, we climb the stairs. We’re easily guided in a full circular trajectory through the upper spaces, ending up back at the top of the staircase. But in contrast to the sparse boldness of the five large pieces on the first floor, the show becomes more complicated, busy and bitty.

In a long thin space, we see photographs of varying sizes, framed like downstairs, each combining a natural element with something manmade: leaves and telephone wires, a dog sleeping in the shade of a curve of concrete, some plants growing in front of a painted wall. There are also videos, displayed in different formats (projection, large plasma screen, small monitors): a cactus blows gently in the wind above some building materials, a water hose moves like a snake through some undergrowth.

The little details of the exhibition set-up don’t seem to matter much — the works are not installed preciously, not carefully lit. Some lines of text printed on white A4 sheets of paper, pinned to the wall here, are an exception. These flimsy pieces break the continuity of the tough presentation methods and the imagery, and seem to act more like an artist’s statement than an artwork. This is the only place where we feel the artist’s presence: In her images, she is a barely-felt  observer. 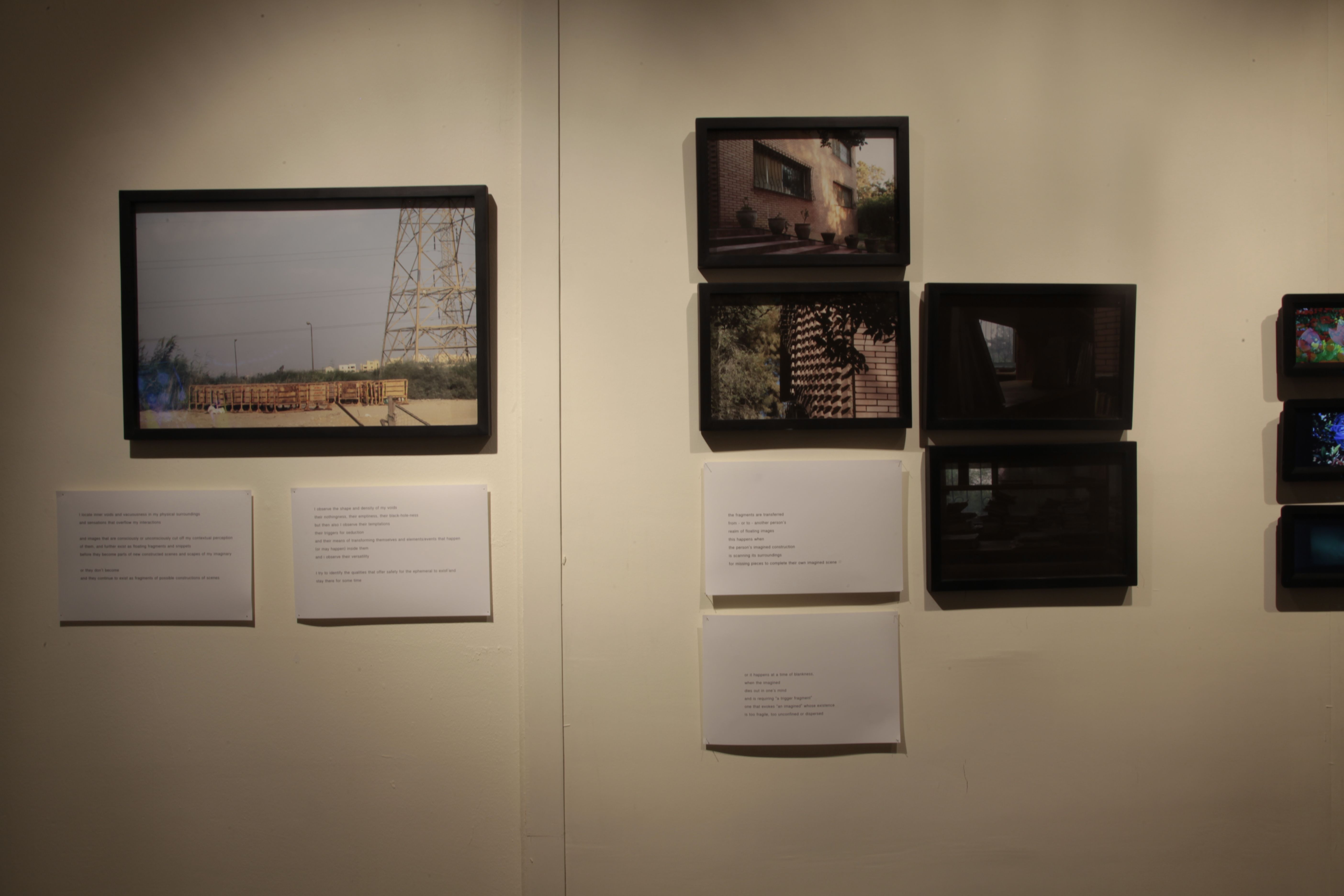 “Multiplicity creates a possibility for association,” says one phrase.

Another work stands out: an animation projected downward onto a square white table with a glass top. It shows digitally drawn lines and arrows moving slowly in a black vacuum, a mysterious diagram. Later we find out that it’s a symbolic abstraction of the exhibition’s spatial plan.

Eventually, having passed more photographs, a time-consuming projection of entries from The Dictionary of Imagined Spaces, a screen on the floor showing a hand writing a list of gardening items in Arabic, and the lamppost again — from this high angle we see a growing plant inside the glass of the mutated light — we end up in another octagonal room, listening to a recording of a man speaking about building a new library, and planning the garden in which it should go. The title we have seen before: It became known that King Mariut now has a library. 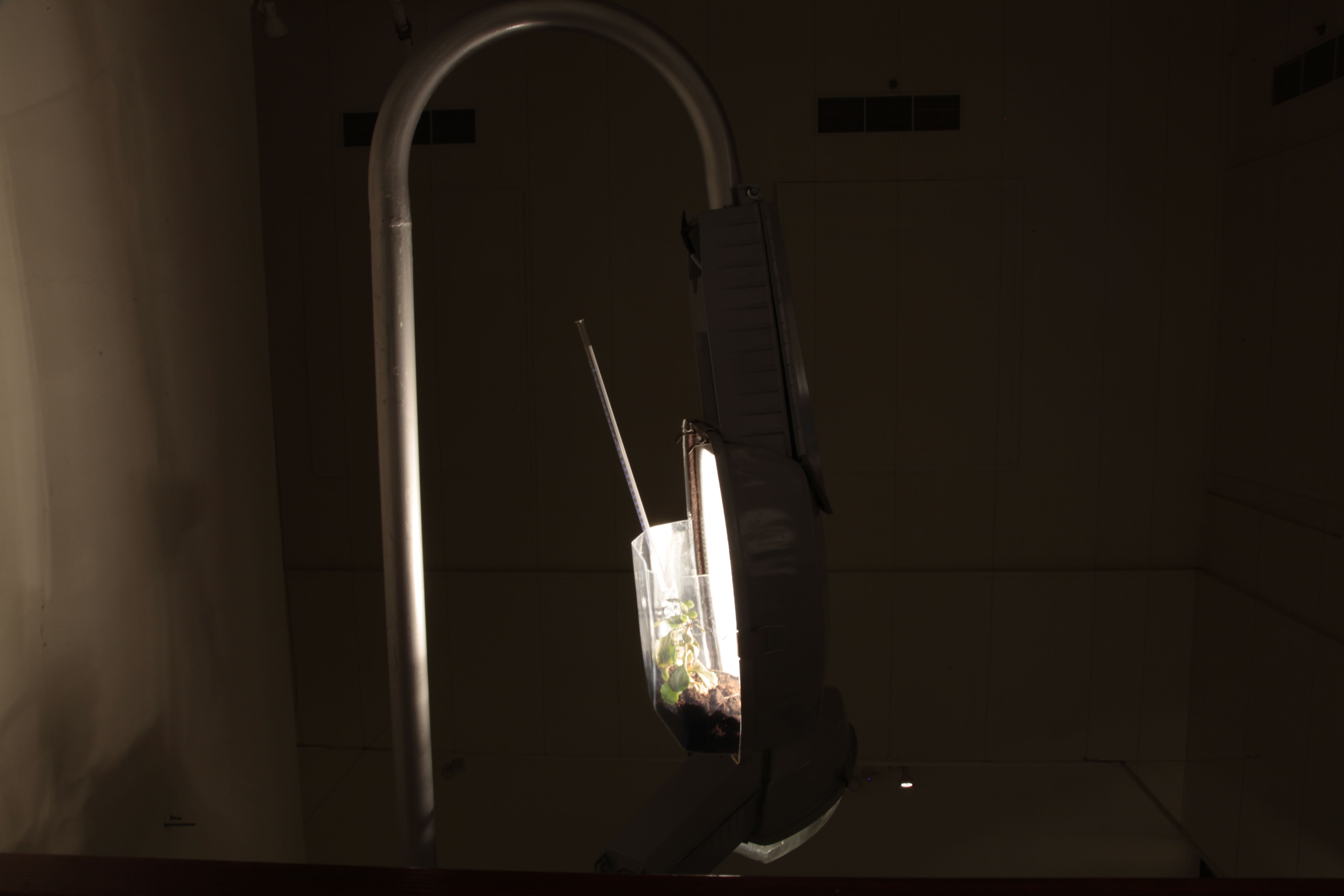 So is this the garden we saw in the wallpaper photograph of the villa? And is it the one we saw a map of in the first photo downstairs? Is the list of gardening items video related? We don’t know. Are these gardens imagined, as The Dictionary of Imagines Spaces might suggest? Or are they real, like the photos and videos of urban Egypt that make up the bulk of the show? Perhaps the streetlight, real but distorted, fairy-tale-like, is the connecting element. Is the artist denouncing or celebrating human interventions into the natural environment? As her presence in these works is so modest, we can’t tell. 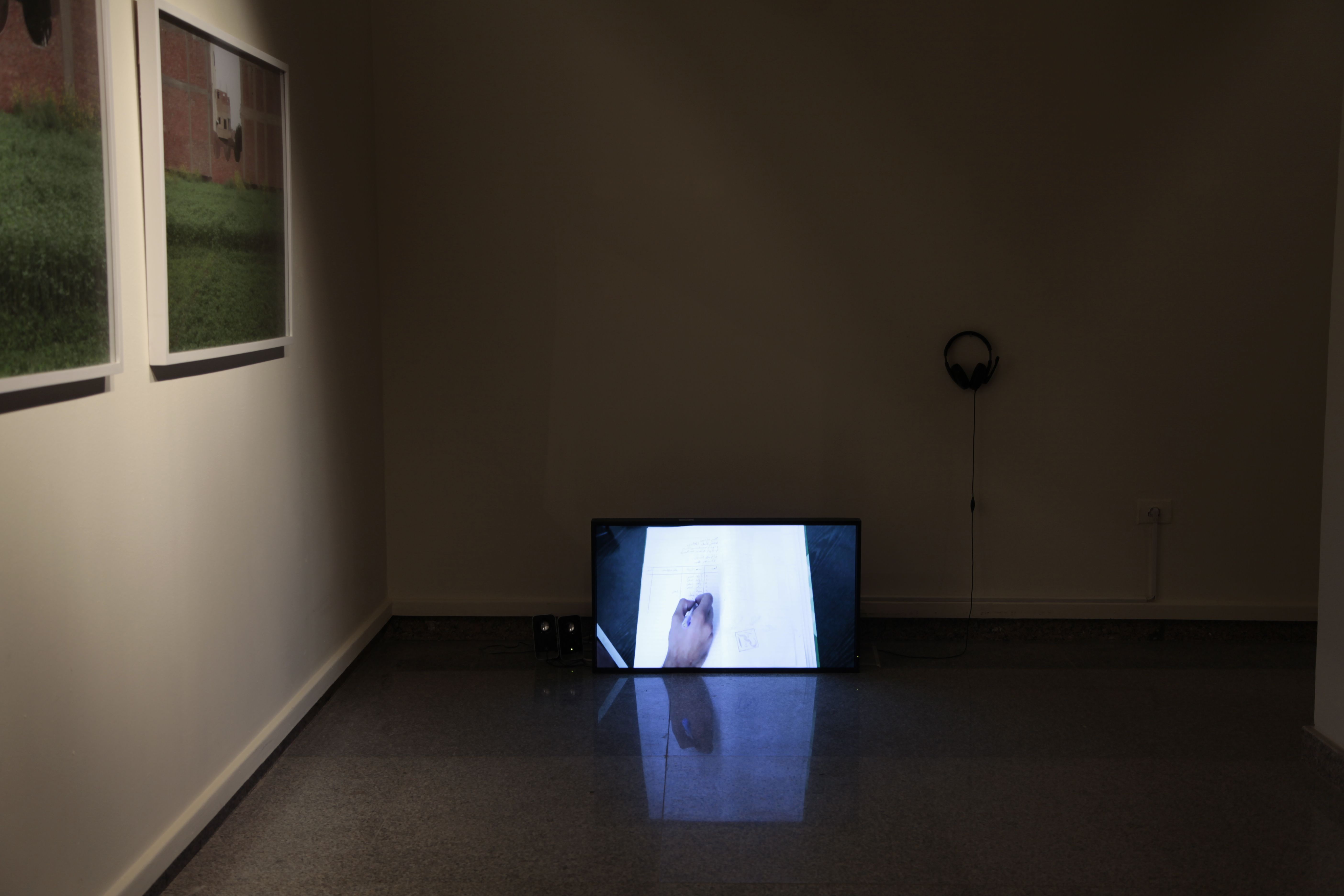 While the largely familiar spaces photographed and the dense texts don’t enthrall, they are sharp observations in sensitive compositions, and the images’ high quality printing on archival paper transforms these ordinary scenes into artistic landscapes and valuable art pieces — the work is also for sale.

On December 4, Rana ElNemr spoke at the gallery. She spoke of her process for the exhibition — created over several years — as one in which she tried to detach herself from past experiences, from all that she had seen and perceived, to begin reading The Dictionary of Imagined Places as a blank slate.

ElNemr described this process as fun. One audience member seemed uneasy at the idea of a process of detaching oneself as being fun, or even possible. She went on to describe the exhibition as “dada, which refers to a wooden rocking horse in French, one that doesn’t move forward nor backward, but that simply rocks a child to sleep.”  The analogy suggested that the exhibition didn’t take her on a journey of imagination, but rather numbed her.

And the gallery’s security guard asks us: “Have you studied art? Could you explain to me what I’m meant to see in these images?”

What is it that we expect from an image, we wonder, why do we look to justify an artwork? Is the desire for emotion or meaning based on an understanding of art as a means of communication, as language? To whom is the work addressed, and can it be translated?

ElNemr’s spaces are more often than not void of human emotion — they focus on absence as much as presence. The artist seems absent from the work, and aesthetically, the absence of focal points in her compositions leave us hungry. Is this not a very real depiction of “imagined space”: A subtle celebration of bare spaces, of deterioration, in a context where it is usually the most colorful voice that is heard?

Topics
Related
Ahmed Badry
Doing nothing
Sarah Rifky | #WAYDO marks an interesting moment of collaboration between two types of institution and it stages a
American University in Cairo
Toward an art that hides nothing behind
Adham Selim | Ganzeer’s metaphor imagines the world as a spectacle, something that you can choose either to gaze
American University in Cairo
Malak Helmy at AUC: Back to the academy
Lina Attalah | Malak Helmy’s show adds a new beam to the inquisitiveness that surrounded AUC’s move to the desert
Beth Stryker
A blockbuster art show in Cairo: Q&A with Hassan Khan
Jenifer Evans | I remember hearing that Hassan Khan doesn’t show in Egypt because the works are not shown properly,