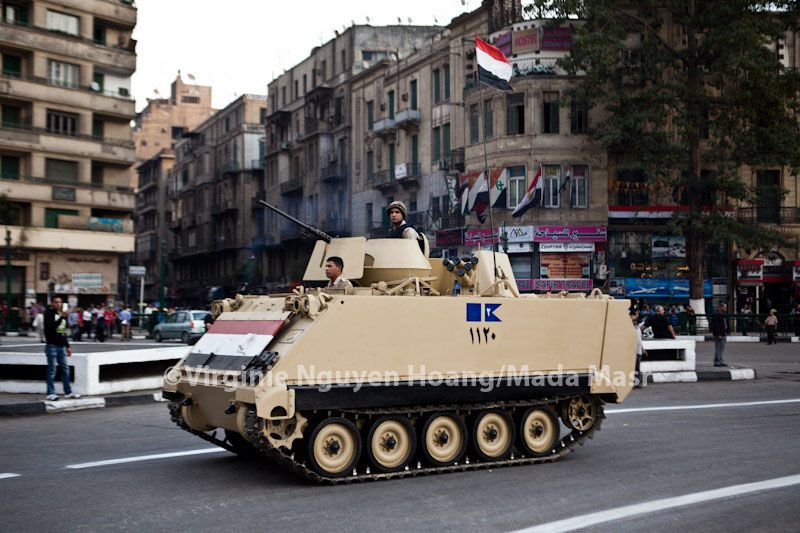 Security visibly intensified across Egypt on Friday in anticipation of the so-called “Islamist revolution” protests announced earlier this month by the Salafi Front, but few people ultimately took to the streets to confront the ranks of police and Armed Forces stationed in the country’s streets and squares.

The relatively quiet day turned into an opportunity for the state to demonstrate its security capabilities, while most local media coverage responded with an inflated sense of nationalism and alignment with the government.

The Salafi Front had called for nationwide marches on November 28 under the slogan “The revolution of the Muslim youth,” announcing that it would protest against the current government and to protect Egypt’s “Islamic identity.” Last Sunday, the Muslim Brotherhood endorsed participation in the protests.

Cairo’s Matareya district saw the only significant protest of the day, which devolved into deadly clashes. Hundreds took to the streets, raising their hands in the four-finger salute signaling support for deposed President Mohamed Morsi.

At least one person died in the violent confrontations with security forces that ensued, according to the Health Ministry, while Reuters said the death toll was as high as three, citing the Matareya police station.

At least 400 protesters participated in the march, according to a Ministry of Interior statement, which went on to allege that the deceased was shot dead by armed men in a drive-by shooting.

However, the Salafi Front asserted the man had been shot by police forces. The privately owned Masrawy news site corroborated reports that the police had begun opening fire on the demonstrators.

With the day’s only major street action confined to a limited, relatively out-of-sight area, the overwhelming picture of Friday’s highly anticipated protests was one of empty streets and the state announcing its victory.

In Cairo’s Tahrir Square, Alexandria and other major cities, small, festive gatherings took place to counter the calls for protests. Demonstrators raised the Egyptian flag and pictures of President Abdel Fattah al-Sisi. Governors joined the protesters in several areas, including Alexandria and Sharqiya, assuring reporters that security forces were in control of the situation.

By noon, police had arrested 107 purported members of the Muslim Brotherhood, according to a Ministry of Interior statement cited in the state-owned Middle East News Agency (MENA).

Security forces were in complete control of the situation, with the exception of a few “malicious acts,” Prime Minister Ibrahim Mehleb told the privately owned television channel CBC from the Cabinet’s operations room.

However, that was a price Egypt was willing to pay in its fight against terrorism, Mehleb declared.

Imams affiliated with the Endowments Ministry criticized the calls for protests during the Friday sermon, calling the demonstrators “the enemies of Islam” and condemning the use of religion for political aims.

Though the expected demonstrations were few and far between, the day was marred by fatal violence seemingly unrelated to any protest actions. In the Gesr al-Suez area, unknown armed assailants drove by a checkpoint and opened fire, killing a military officer and injuring two others, according to an Armed Forces statement.

Another military officer was killed on Friday in the Abou Zaabal area, the state-owned newspaper Al-Ahram reported, quoting an unnamed military source.