Head of National Council for Women: Female prisoners are better off behind bars
By
Mada Masr 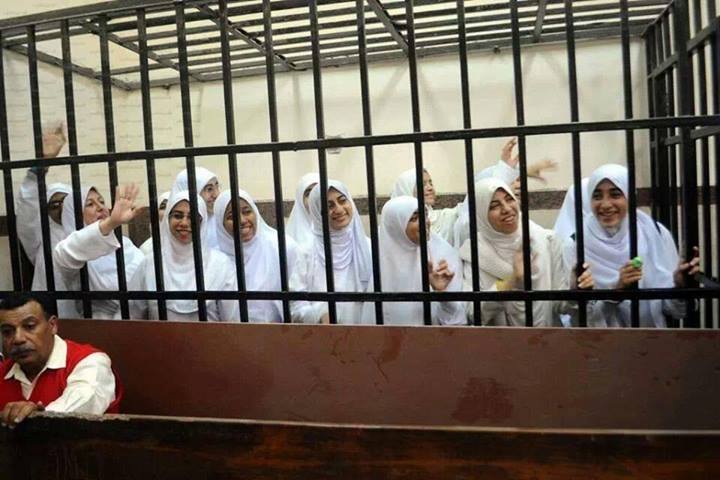 Mervat al-Talawy, the head of the National Council for Women (NCW), recently stated in an interview to privately owned Dream TV channel that she believed that imprisoned female activists were better off behind bars.

She said that she had been to prisons to visit women and had asked them if they were being abused, and if they had access to food, books and breaks, and found that there “were no problems.”

Talawy referred specifically to the “7 am girls” and female Muslim Brotherhood members. Her statement about the “7 am girls” refers to 21 young women from Alexandria that were given prison sentences ranging from 11 and 15 years for peacefully protesting against the regime on December 21, 2013.

When asked about observations from local human rights organizations criticizing prisoners’ treatment, Talawy stated that these organizations have to be critical in order to receive foreign funding.

Talawy’s remarks have faced criticism from women’s rights activists in Egypt. Dalia Abdel Hameed, a gender and women’s rights officer at the Egyptian Initiative for Personal Rights, told Mada Masr, “It’s a horrible comment, to think that being imprisoned is by any means better than freedom. It’s really problematic and it’s more evidence that the National Council for Women is not an independent entity.”

Abdel Hameed said that the NCW is more concerned with protecting the regime than protecting the rights of women.  She said there needed to be “real reform” within the NCW if it wants to claim that it upholds these rights.

Currently, she said, the council will not defend people who are opposed to the regime. The NCW does not see women who criticize the state as “real Egyptians,” she added.

Abdel Hameed explained that within the Egyptian prison system, there is “a huge amount of sexual violence being perpetuated by state actors.” She added that the criminal justice system needs reform in general, but especially so when it comes to the rights of women in prison.

However, Abdel Hameed doubted that the NCW will achieve real reform while its head continues to make statements like this.

She said the interview was “telling about the political will within the National Council for Women of the state institutions. Instead of talking about structural reform, or real reform or the criminal justice framework in Egypt… If we ignore all of this, and say that women are doing much better in prison than they are free, this reflects that there is no real will for reform.”

This is not the first time that Talawy, a career diplomat and Egypt’s former deputy foreign minister, has made controversial remarks about the state of Egypt’s human rights. In June 2014, she heavily criticized two members of the European Union Election Observation Mission in Egypt at a conference held by the National Council for Women.

At that time, the EU mission had just released a preliminary report about the 2014 presidential elections in Egypt, concluding that while the elections had been fair, they had taken place in an undemocratic environment. The report highlighted state violence towards street action, the crackdown on activists and the mass death sentences issued against Muslim Brotherhood members.

Talawy said the report was full of lies, showed animosity toward Egypt and undermined the credibility EU and its mission. She ended her harsh speech to the mission representatives with, “Please tell the EU if you continue to be enemy to Egypt, you are the losers, we are the winners. You are out of the Middle East.”