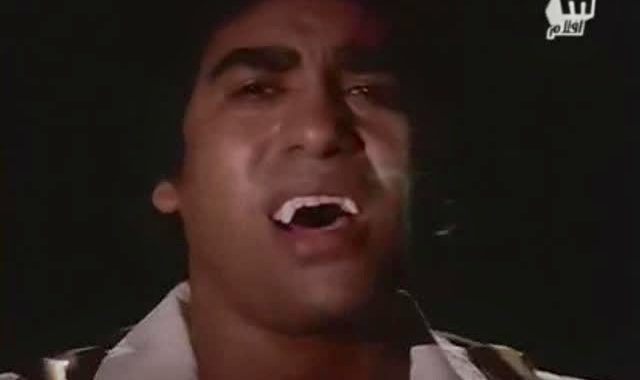 Imagine it’s the late 1970s somewhere in Maadi on the eve of Halloween. Michael Jackson, Ahmed Adaweya, David Bowie and Ali Haggar are locked in a room with 24 hours to make a horror-comedy musical and enough hashish to cloud and dwarf their every thought.

Functioning at half-capacity, they speak in gestures to mediate the language divide, and dig deep for relatable references. Bowie mentions The Rocky Horror Picture Show, Adaweya bellows out his Zahma ya Donya, Zahma (How Crowded is the World) with flirty eyes and flexed arms, MJ dances out scenes from Thriller and Haggar sits back with his high-cheekbones looking pretty, humming to whatever Adaweya is singing.

Shebl died of liver disease at 47 years of age in 1996 after creating an impactful, eclectic body of work. He was a diplomat, film critic, screenwriter, talk-show host, radio DJ, and the director of unusual films, including Al-Tawiza (The Talisman, aka The Amulet, 1987), Al-Kabous (The Nightmare, 1989), and Gharam wa Intiqam bel Satour (Love and Revenge… with a Meat Cleaver, 1992).

Fangs, Shebl’s first feature, is a kitsch and novel masterpiece of an overlooked fleeting moment in Egyptian music history: Arabic glam-rock. Starring shaabi music king Adaweya as Dracula or “Amir al-Thoulm” (Prince of Darkness), and Mona Jaber and singer Haggar as a distressed young couple who find themselves knocking on Dracula’s door after their car breaks down on a stormy evening.

“Despite its release date, this horror-comedy-musical is unquestionably a product of the 1970s,” wrote my colleague Ali Abdel Mohsen in 2011. “Frequently — and mistakenly — referred to as a remake of “The Rocky Horror Picture Show,” “Anyab” can be more accurately described as a movie made by a guy who’s seen “The Rocky Horror Picture Show” and really wants you to know it.”

Indeed, anyone who has seen both films can recognize the influence of Jim Sharman’s Rocky Horror (1975) on Fangs from the opening credits. Both open with disembodied lips floating over a screen that’s faded to black, though in Fangs the effect is more DIY: the lips belong to a person wearing black make-up, whose skin is the background.

Fangs, unlike Rocky Horror, also starts with a dance scene involving a circle of actors in bat costumes chanting in song-like unison about darkness, fangs, and fear. It’s all cool until suddenly a member of the batty circle cuts off the wing of a chicken, and they continue to dance around its twitching, bleeding body. It’s pretty disturbing.

Then we’re back to Rocky Horror, and a young couple on their way to a new year’s party when their awesome 1970s red hunk of junk car breaks down in the middle of a thunderstorm. Mostafa and his blonde fiancée Mona decide to walk to a nearby house to phone for help. Haggar breaks out into a five-minute lyrically repetitious song, bellowing, “We will find the light, we will find the light,” as he and his terrified date make their way along the long spooky walkway.

Alongside a mix of animation, title cards and thought bubbles, a loony narrator pushes along the story with metaphors about color, lightness and darkness, in addition to very literal explanations about Dracula and vampires. He spends informs the audience that vampires are a reflection of the unconscionable members of society who feed on the poor and unfortunate.

As the film progresses, plot line and politics distance Fangs from its Rocky Horror foundations. Like Abdel Mohsen says, the film “turns into a 30-minute montage of public service announcements, where the lead couple, in a series of separate vignettes, falls prey to a doctor, plumber, cab driver, butcher, private tutor and realtor, all played by the main vampire, ending every scene by turning to the camera and smiling to reveal his fangs.” Basically, Adeweya repeatedly cons the young couple with low-quality, overpriced junk and services ostensibly to help them survive.

Critic Viola Shafik has argued that Adaweya’s casting as Dracula shows that the neo-realism filmmaking of that period, with which Shebl was associated, was “not as much socialist oriented but submitted to a large extent to the perspective of materially cornered pretty bourgeoisie,” whose “basic fears and biases” Fangs voices.

Shafik has written that the film’s songs “create on a sonic level an opposition between Adaweya’s popular music and the songs of the young bridegroom.” While the darker-skinned, chubby Adaweya “spices his colloquial lines with urban lower-class slang wrapped in relatively rough tunes,” the light-skinned, slim Haggar’s songs are more polished: “Thus the bourgeois couple here is threatened not only by getting their pockets emptied, but also by being swamped with supposedly ‘gross’ lowbrow art and the ascendant aspirations of the lower classes.”

But the soundtrack, by Moody Imam, is a truly special experience. It’s all over the place, from Pomp and Circumstance to Pink Panther to some extremely funky synthesized break-beats. It captures a perfect musical moment in Egyptian history when electric guitars, keyboards and drum machines entered the market, making that sweet 1970s-into-1980s retro sound of groovy delirium accessible. The film acts as a welcoming exhibition space for these new instruments that would eventually – despite the fears of those with high-brow tastes – dominate the soundscape of the 1980s.

Toward the end of the film, vampires drink their own blood in addition to each others, which goes against basic vampirical practice. Perhaps this is another comment on consumerism and the strained social-economic landscape of Sadat’s open-door policy, increasing privatization and the arrival of Gulf money through returning Egyptian economic migrants.

Despite the prejudices and stereotypes, Adaweya seems to have a good sense of humor throughout. In fact, he might be the best Dracula I’ve ever seen, with his cheeky looks, plastic teeth, afro and, best of all, his glam-rock outfit.

Overall, Fangs is a flamboyant, eccentric and fun musical-horror display. To me, it feels like a film fiasco, but the kind that offers so much laughter and entertainment that it’s a joy to consume, one bloody bite after the other. It was a commercial and critical failure when it was released.

AD
You Might Have Missed
What we talk about when we talk about trees
Carbon Colonies & A Green New Deal
Mugamma revisited: Reimagining the building and the square
Where do old lesbians go to die?
AD
Maha ElNabawi
89 articles on Mada