Tunisians gear up for first parliamentary elections since revolution 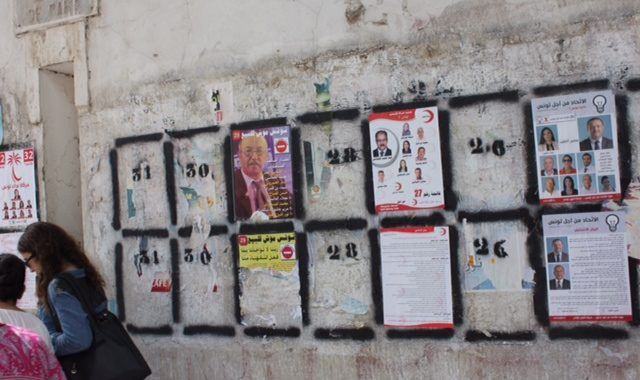 Over 5.2 million eligible Tunisian voters are being mobilized for the country’s historic parliamentary elections on Sunday.

These are the first such elections since the popular uprising, which lasted from December 18, 2010 until January 14, 2011, and overthrew long-time President Zine al-Abidine Ben Ali, paving the way for other Arab Spring uprisings.

Around 13,000 candidates and parties are vying for 217 seats in the National Assembly in a hotly contested vote. The election is scheduled for October 26, while voting for Tunisians living abroad took place on October 24.

Tunisia’s parliamentary elections will not only determine the make-up and nature of their legislative assembly, but also who will serve as the next prime minister, and members of the cabinet.

Since the official commencement of electoral campaigns on October 4, political parties and candidates have organized numerous rallies and plastered their electoral posters and programs on designated, numbered spaces, identifying candidates and listing their campaign promises.

Parties have set up campaign tents and stations across the country, leafleting passers by, and appearing on TV, radio and other media outlets to spread their political messages.

The country’s satellite channels — Tunisia, TNN, and Hannibal — are running round-the-clock broadcasts, updating viewers about the electoral process, and encouraging all eligible voters to cast their ballots.

The national hotline number — 1814 — is being managed by the Independent High Authority for Elections (ISIE), an impartial and non-partisan group overseeing the electoral process. By phone or via Internet, the ISIE answers questions regarding campaigns and elections, with its services available in both Arabic and French.

To many outsiders, the birthplace of the Arab Spring appears to be undergoing the smoothest political transition, a process that seems to be the most inclusive and democratic, in comparison to the other Arab countries that have witnessed popular uprisings since 2011.

Tunisia has steered relatively clear of the mass bloodletting and civil strife afflicting Syria, Libya, Yemen, Egypt and Bahrain. However, the country is not exactly a political model to be emulated, having suffered its share of state crackdowns, political violence, assassinations, and a host of socio-economic and political problems.

For many Tunisians, the demands of their popular revolution: work, freedom, and social justice, remain distant goals, far from realization.

Qassem Affiya, a teacher and board member of the country’s largest labor union federation, The General Union of Tunisian Workers (UGTT), commented, “With the exception of a larger margin for freedom of expression and freedom of speech, we’ve attained none of the revolution’s demands.”

According to official Tunisian state statistics, the country’s unemployment rate has risen to 16 percent (31 percent amongst recent graduates), the highest rate of joblessness in North Africa. Increasing inflation, and growing income inequality are also hindering the country’s progress.

“We keep asking ourselves, as you probably do in Egypt, ‘did we partake in a revolution which radically changes people’s lives and living standards for the better, or was it merely a popular uprising with little-to-no effect’?” Affiya posited.

The unionist explained that the UGTT would not be fielding candidates in its name, but that members could independently nominate themselves if they choose.

In the capital Tunis, many people seem determined to participate in the upcoming elections, with a medium-to-high voter turnout expected.

The two political parties that people anticipate will fare best are the moderate Islamist Ennahda Party, and the Nidaa Party, which includes many figures from the old regimes, and former members of Ben Ali’s, now-dissolved, Democratic Constitutional Rally.

Others expected to make gains are, the Congress for the Republic — a centrist secular party, and the left-leaning coalition, the Popular Front.

Ben Hassan Hamrouch, a leftist youth activist, said he would cast his vote for the Popular Front candidate. However, he expects the Ennahda Party to win the most seats, followed by the Nidaa Party, and the Popular Front, who he thinks will come in a distant third place.

“We expect a government of Islamists, and a return of figures from the old regime. This is the sort of political co-existence that we are realistically expecting.”

Siwar Ali, a female researcher and social activist also said she would vote for the Popular Front, although she doesn’t expect them to be in the ruling coalition of parties. “While Ennahda has lost a great deal of popular support since they presided over the Constituent Assembly, they will probably still take the lead. They have the most money, capital and resources at their disposal, which means that they remain capable of mobilizing the most voters.”

In votes for Tunisia’s Constituent Assembly in 2011, the Islamist party won nearly 40 percent of its seats. However, Ennahda’s politics and performance have alienated many voters over the past three years.

Nonetheless, the largest campaign rallies staged in and around Tunis are those of the well-organized Ennahda Party. 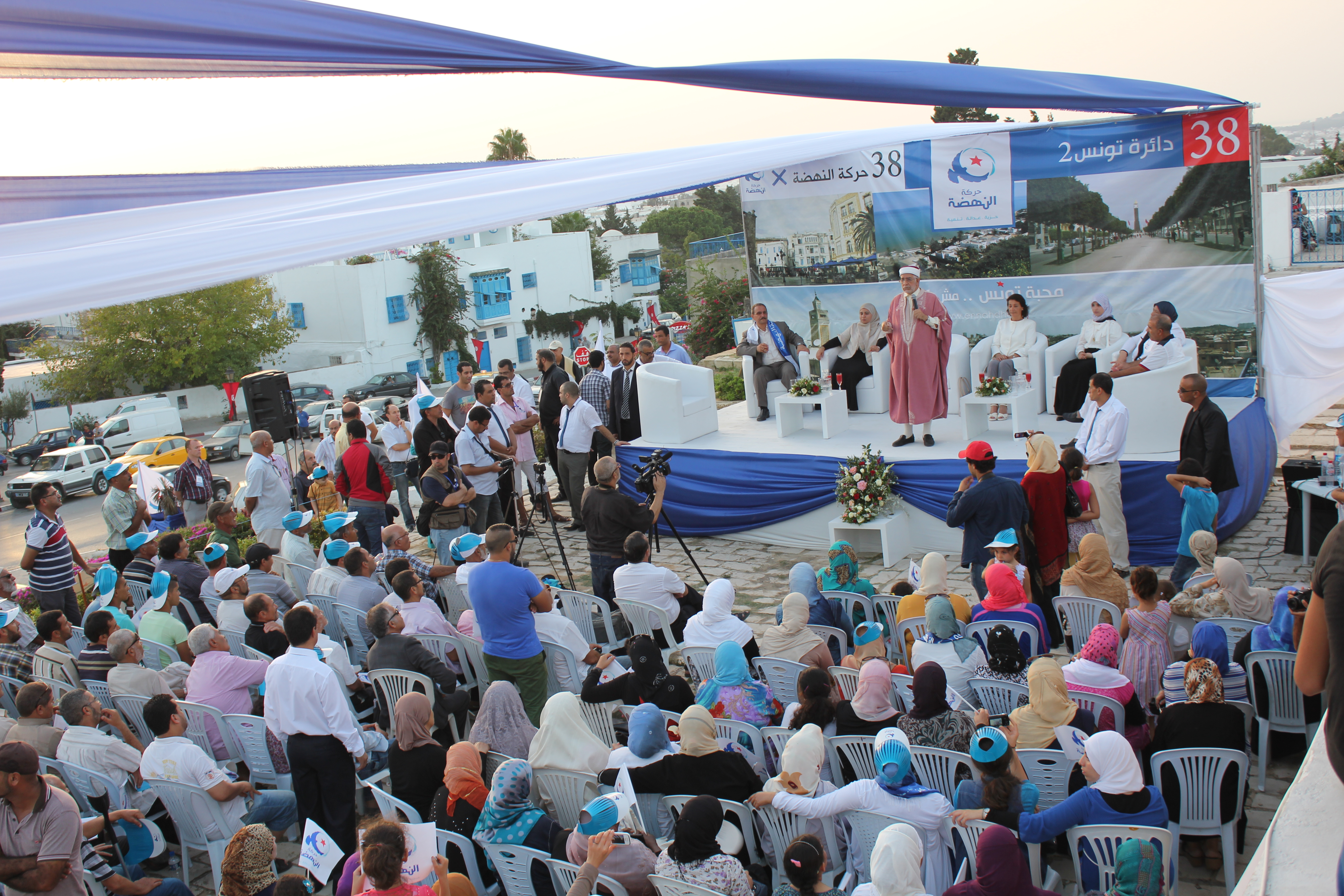 On October 10, Ennahda staged a campaign rally in the picturesque town of Sidi Bou Said, a popular tourist destination.

Abdel Fattah Mourou, lawyer and leading member of the party, addressed an audience of some 200 attendees near a mosque. Most of the audience consisted of males donning blue paper hats with the Ennahda Party logo, while others waved the party flag.

Mourou called on the electorate to cast their votes for the party in order “to realize the goals of the revolution,” and take pride in their Islamic identity. “Be not afraid of the beard or the hijab. Do not shy-away from your identity.”

Mourou continued to address the crowd using a blend of religious and populist rhetoric, particularly about bridging the gap between rich and poor. Overhearing this from across the street, Belal Youssef, a young restaurant employee, commented: “Mourou and his party are hypocrites. They’re just like the Muslim Brotherhood you have in Egypt. They are political opportunists.”

“They tell you God said this and the Prophet said that, just in order to get you to vote for them. They exploit poor people by offering them money, food, and services in exchange for their allegiance. They play on people’s religious beliefs and twist them in order to meet their own interests,” he added, saying he is undecided on whether he will vote or not.

“I’m not really convinced that any of the parties or candidates have the interests or the concerns of the populace in mind. It’s a struggle for power amongst all these candidates. It’s all about winning authority over others.”

In Tunis, an elderly, bearded cab driver, Hammad Lutfi said: “I’ll vote for Ennahda in the parliamentary elections because their representatives are closest to the demands and the will of the people.”

“I will vote for [interim executive Moncef] Marzouqi in the presidential elections, because, even though he is secular, he seems to know the workings of the government, and has a clear understanding of how things run in this country,” he added.

The country’s presidential election is scheduled for November 23, and so far includes 27 candidates, who are competing to take over the role of Ben Ali, who remains in hiding in Saudi Arabia.

The Ennahda Party announced that it would not be fielding a candidate for the presidential elections.

According to the aging taxi driver, “in comparison to other Arab countries, in Tunisia we have a little more tolerance for our political opponents, and for oppositional elements.”

“Hopefully we will be able to continue settling our differences through elections, not through bloodshed, coups and civil wars , as is the case, unfortunately, in Libya and Syria.

Lutfi pointed to Egypt’s top general turned-president, Abdel Fattah al-Sisi, claiming that he rules through violence and by jailing his opponents, while somewhat contradictorily supporting General Khalifa Haftar in Libya.

Mohamed Chihab, the owner of a small souvenir shop in the town of Carthage commented, “Sure. We’re better off than other countries of the so-called Arab Spring that have been torn apart by wars, like Syria, Libya and Yemen.”

“However, our conditions and living standards in Tunisia have deteriorated since the revolution. Tourism has been hit hard and countless people have lost their livelihoods,” he added.

Chihab expressed nostalgia for the old days: “I used to have seven employees working with me in this shop prior to the revolution. Now there’s just me, my brother, and one employee remaining, the shop is almost empty.”

“We don’t miss Ben Ali or his oppression. We are proud of the political plurality, personal freedoms and free speech we now have. But these things don’t feed hungry mouths, nor do they pay the rent.”

Chihab concluded by saying he will vote for the Nidaa Party. “We hope Tunisia will regain its political stability, that tourism will return to the country, and that the economy will prosper once again.”

AD
You Might Have Missed
What we talk about when we talk about trees
Mugamma revisited: Reimagining the building and the square
Carbon Colonies & A Green New Deal
Where do old lesbians go to die?
AD
Jano Charbel
78 articles on Mada