In the final act of Laila Soliman’s Hawa al-Horreya (Whims of Freedom), a young woman in a suit stands behind a podium and soberly recites the full text of the 1914 Law of Illegal Assembly, introduced by the British colonizers for fear of revolt among the Egyptian population and still in force today.

The scene is one of many in which we are bluntly reminded of the relevance of historical documents and their fundamental role in understanding the present.

But archives, like memories, have gaps, as mentioned later in the play. Artists can work in those gaps to try and shape a different narrative, while historians use art to consolidate historical evidence and investigate collective motives.

Commissioned to create a new work reflecting on World War I on the occasion of June’s LIFT Festival in London, the Egyptian director combined theater, documentary, storytelling and music to create an original, engaging multimedia lecture performance for two actors, Zeinab Magdy and Nanda Mohamed.

They present a rich selection of documents, songs and anecdotes from the 1919 revolution, tracing common traits with the 2011 uprising and its aftermath in Egypt and the region.

Soliman developed the script by looking at how the 1919 revolution intertwined with the Great War. With a team of scholars of Egyptian history and connoisseurs of popular culture, including historian Alia Mossallam and musician Mustafa Said, Soliman, her partner Ruud Gielens and the two protagonists dug into old books, newspapers, pictures, lyrics and official documents.

The play tells of Egypt’s costly involvement in the war (with mention of its often forgotten role in the disgraceful Palestine campaign) and the following rebellion against colonialism through fragments that the general public is unlikely to be familiar with, like the story of Munira al-Mahdeya and Naima al-Masreya, pioneers of Arab music and women’s emancipation.

The play confronts the persisting patriotic and nostalgic narrative of that period through an unusual combination of documents: a police report of a rape committed by British troops, newspaper front pages projected on the wall, the lyrics of a catchy song “Pardon ya Wingate,” in which Egyptian workers sarcastically address a British general while denouncing their oppression. 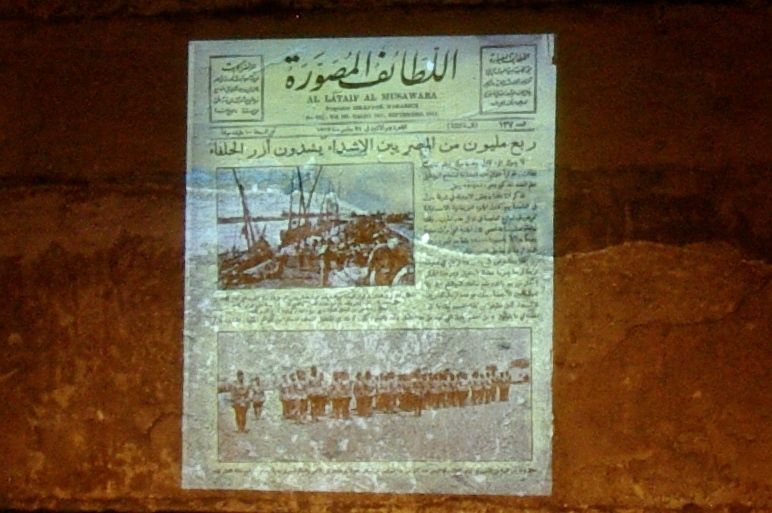 The lecturer (Magdy) incarnates the stereotype of upper-class idealist-intellectual-activist passionately — but naively — advocating for justice, with a rational distance. Her counterpart, the singer (Mohamed), is down to earth, more aware of the sour contradictions of life and war, less concerned with showing off her erudition.

As the lecturer, with professorial body language, emphatically recounts the noble struggles of the Egyptian people, the singer takes advantage of infinitesimal rests in her speech to interrupt or burst into song, deviating toward her own recollection of the figures and events mentioned. The lecturer hardly conceals her annoyance, exchanging complicit glances with the audience, as the singer gracefully pushes her off stage to comic effect. The passive aggressive dynamic is entertaining, and the singer engages the audience, inviting them to clap along to the songs.

Music has a central role not only for Nanda Mohamed’s charming performance, but also in highlighting the power of musical history in preserving memory, as music (like art in general) can speak of history and make history at the same time.

In a cleverly choreographed sequence, the old gramophone manually operated by the singer gets stuck in a loop as the lecturer speaks about sectarianism in Egypt.The singer pushes her to go on and detail the 2011 massacre of Copts at Maspero, but she is reluctant.

“Everybody knows what happened then,” she says.

It’s the singer who eventually completes the sentence, saying, “They ran over them with APCs,” before the scene closes.

The two actors credibly interpret different class attitudes and thus very different experiences of revolution, inevitably reflecting on the actual divide in expectations and visions that various groups of people in Egypt have painfully discovered in recent years. 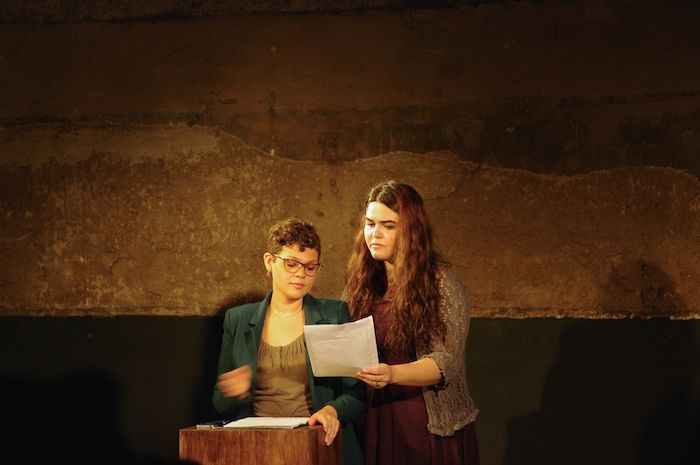 Soliman’s approach is pedagogic: The play is informative and entertaining, seducing the audience through a variety of forms, oscillating between humor and drama. It also suggests that art and artists should deliver a message.

Tackling explicitly political themes has become harder in the past year, as arrests, censorship and intimidation increase. The narration’s multiple layers prompt us to wonder: “What will remain of these times in 100 years, if we’ve already forgotten what happened only a few years ago despite abundant evidence?”

But in Soliman’s cleverly assembled play, even the spectators seem to have a prescribed role.

As I left the theater, I found myself uncomfortable with an illusory feeling of “togetherness” with the rest of the audience, with the artists — even society at large.

I felt we were being reassured that we stand on the “right side” of history. Soliman tries to address the internal contradictions of revolutionary discourse by splitting the “right side” along the class divide between the two protagonists, but even in that recognition we feel reassured by our own understanding of it.

The director and the performers seem well aware of their audience, expecting a specific reaction from those who like to recognize in themselves those noble feelings and want to believe they are genuine. On the other hand, this kind of emotionally charged narrative is typically a source of cynicism for people who are uninterested or skeptical when it comes to a sensationalized celebration of revolutionary myths per se.

If the aim of the play is to deliver a political message, somehow it preaches to the choir, offering comfort and catharsis. Far from fighting the counter-revolutionary discourse of blind support for the army that dominates the public sphere, it is likely to confirm detractors’ prejudices.

In a particularly poignant scene, Nanda Mohamed, who is Syrian, brusquely asserts, “We are never going to go back, they say.” We can’t help but feel empathy, knowing she probably truly feels what she is reciting. Likewise, when Zeinab’s expression saddens as she mentions the dead at Maspero, one can either believe in her acting (and assume she is only pretending to be sorry), or accept that she is mechanically re-enacting a dramatic experience she already lived herself.

Although the two actors are very convincing, knowing that their feelings coincide with the characters they interpret made it difficult to believe in them. In a previous play, Lessons in Revolting (2011), Soliman cast a group of well-known young activists who performed the same scenes they had filmed in Tahrir amid tear gas and gunshots, juxtaposed with an enlarged projection of their dramatic footage. This glorified the figure of the revolutionary and the revolutionary artist, appealing to those who identify with their values and see them as legitimate protagonists to guide the rebellion and inspire the masses. In retrospect, perhaps that play anticipated that some revolutionaries would become stuck in a powerful image or symbol, trying to look like what they nostalgically treasured.

Artworks that directly tackle the revolution have had a lot of exposure in the past three years in Egypt, and especially abroad. Criticism has also been abundant: Many have dismissed explicitly political works of art, to the point that artists and audiences are polarized between those who believe art should have a message and those who don’t.

Another example of theater with a purpose was the National Theater’s Hikayat al-Nas fi Thawret 19 (Tales of People in the 1919 Uprising) by Ahmed Ismail. Critic Nehad Selaiha wrote that it “juxtaposed the 1919 uprising and that of January 25, forcing the audience to critically compare the two, and powerfully embodied a warning against the forces of darkness (namely, the Islamists and Salafis) that threaten to engulf the latter.”

Whims of Freedom makes you think about the meaning of the word “revolution,” but like Soliman’s Lessons in Revolting and No Time for Art (2011), it falls into the trap — to a lesser extent — of romanticizing it into a newly packaged version of the dangerous nostalgia it criticizes.

“I love wars,” the lecturer says at one point. “I know it’s a sick thing but for these people wars were the nationalistic connection with the country and the people, and for us revolution is the same connection.”

Soliman embraces artists’ role in speaking collectively for society, and suggests that politically charged works justify art’s role; but she, too, presents a personal version of history. The play is hopeful, believing in the power of history, archives and artists’ role in bringing them to life, and also in the possibility of a collective struggle for liberation. For many the revolution has meant positive change, restored faith in humanity. But for others, who see it as an abstract idea disconnected from people’s struggles on the ground, it meant disillusion, pain and regret.

And the audience does leave the theater with heavy questions: For what were these battles fought? What is the use of the archive besides treasuring romantic pictures for consolation to escape present failures?

Whims of Freedom was performed at Cairo’s Makan from October 10-14, and is now traveling to Berlin, Freiburg and Brussels.

AD
You Might Have Missed
Where do old lesbians go to die?
Carbon Colonies & A Green New Deal
Mugamma revisited: Reimagining the building and the square
What we talk about when we talk about trees
AD
Laura Cugusi
7 articles on Mada

Topics
Related
American University in Cairo
Toward an art that hides nothing behind
Adham Selim | Ganzeer’s metaphor imagines the world as a spectacle, something that you can choose either to gaze
Nora Amin
We are all complicit
Naira Antoun | The audience is not simply watching a play; we become unwitting attendees at a public meeting.
Hassan al-Geretly
Storytelling as a practice of freedom
Naira Antoun | A Q&A with Hassan al-Geretly, director of Egypt’s oldest independent theater troupe Al-Warsha, which