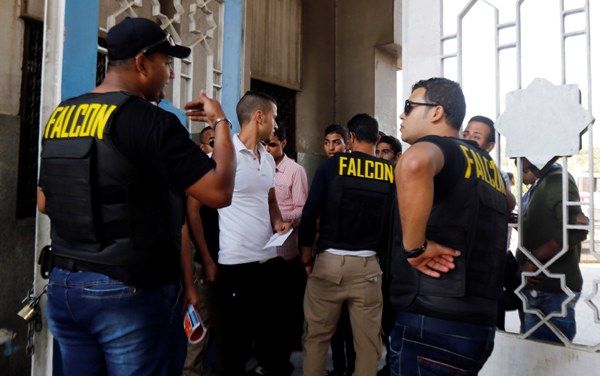 A number of local and international human rights organizations condemned the arrests of students, amid ongoing unrest Tuesday on several university campuses nationwide.

A statement was made by several Egyptian rights groups, including the Arab Network for Human Rights Information, the Cairo Institute for Human Rights Studies, the Nadim Center for the Rehabilitation of Victims of Violence and Torture, the Hisham Mubarak Center for Law, the Association for Freedom of Thought and Expression, and Nazra for Feminist studies.

According to the statement, police arrested 70 students from universities across the country, in what they called “a preemptive strike,” to hinder any events that were scheduled to take place at the start of the new term.

Meanwhile, clashes erupted between police forces and students of the engineering faculty at Alexandria University on Tuesday afternoon, according to the Association for Freedom of Though and Expression (AFTE).

Police forces used tear gas and pellets to disperse a demonstration organized by the Students Against the Coup movement. A number of students were injured, and police attempted to evacuate the campus. Students were searched as they exited and 30 were reportedly arrested.

Photos posted on Twitter by students and activists show clouds of teargas surrounding students trapped inside the faculty buildings. Others depict injured students and blood-stained floors.

The Ministry of Interior issued a statement later on Tuesday asserting that security forces deployed by the Alexandria Security Directorate dispersed a demonstration organized by the Muslim Brotherhood, and arrested 37 “rioters” in possession of Molotov cocktails, fireworks, and papers opposing the military and police.

The statement added that 250 members of the Brotherhood allegedly broke into the faculty of engineering and assaulted security forces using Molotov cocktails and pellets, injuring two policemen and two students.

However, a YouTube video of events seems to indicate a fierce crackdown by the police using pellets and teargas, and shows a group of students taking cover from the attack and responding with fireworks. An unconscious student, who was injured in the face, was carried inside a lecture room by his colleagues.

AFTE also reported clashes at Sadat private university in Cairo, between a Students Against the Coup-led demonstration and police, who dispersed them using teargas.

The demonstration was organized to object to security forces’ presence on campus on Monday, and what they referred to as “humiliating treatment,” including searches to enter the campus.

The statement by rights groups described such security campaigns as “futile” when it comes to securing universities and stopping on campus violence. “This will only make matters worse, as it agitates students, rather than containing and controlling their anger.”

“The signatories assert that this campaign is nothing but a new episode of restrictions on the student movement, which reduces the freedoms gained over the last three years. It is inseparable from the campaign against public freedoms in Egypt in general, particularly against the freedom of thought and expression.”

The organizations demanded the immediate release of all students arrested on the first two days of the school year, as an initial step to calming the current situation on campuses. It also recommended supporting peaceful student activities, allowing full freedom of expression to students on campus, reassessing decisions to suspend students without serious inquiries, and immediate investigations into the killing of students during the previous school year.

900 of the students arrested last year currently remain in prison. Tens have joined a widespread hunger strike objecting to their detention without trial.

The deputy Middle East and North Africa director for HRW, Joe Stork, called the mass arrests of students “a pre-emptive strike on free speech and free assembly,” adding that “universities should be safe zones for the exchange of ideas, including political debate.”

The report also condemned the granting of powers to university deans to dismiss faculty members for “crimes that disturb the educational process,” the banning of all political activity on Cairo University campus, and the hiring of private security firm Falcon to guard entrances at 12 Egyptian universities.

On Monday, clashes broke out at four universities as students demonstrated against the strict policies implemented by new private security firm Falcon and university guards.

There were long queues at university gates and stories circulated on social media of denied access to students not meeting dress codes, as well as confiscated bottles of perfume and body spray from female students at Zagazig university, allegedly for fear of their use in igniting fires.

He refused to disclose the amount of money agreed upon for Falcon’s services, but said that the Head of Cairo University Gaber Nassar allocated LE50 million last year for security. He added, “[Falcon] does not even get 10 percent of that amount for securing one campus.”