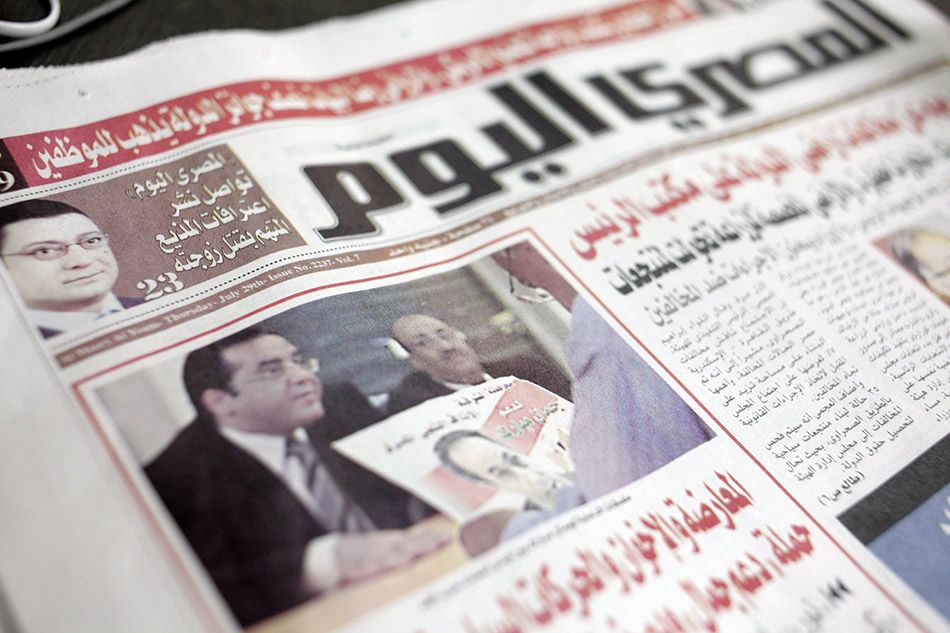 “News, information, data and documents related to the nation’s intelligence and its activities, methods, personnel, and anything connected to its duties in maintaining the peace and security of the state and its political system is considered a state secret, stipulated in Article 85 of the Penal Code, unless published by written permission from the head of the intelligence services.”

This article came to the fore recently following the stalled printing of independently owned newspaper Al-Masry Al-Youm’s Wednesday edition by the authorities, until the latest installment of an interview with former intelligence officer Refaat Gibrael was removed from publication.

Al-Masry Al-Youm discarded 40,000 copies that had already been printed and removed the article accordingly.

The media is restricted from publishing any information that might affect the intelligence services and their work. Section A of Article 80 stipulates a prison sentence of six months to five years and a LE100-500 fine for violation of this law. The punishment is harsher during times of war.

Al-Masry Al-Youm published five installments of its interview with Gibrael, the retired intelligence officer who passed away in 2009. The editor of the newspaper, Mohamed al-Sayed Saleh, conducted the interview a year and a half before the officer’s death.

According to the chief editor of Al-Masry Al-Youm’s online portal, Ahmad Ragab, the printing press received a call from intelligence services ordering them to stop printing Wednesday’s edition. The newspaper wasn’t able to resume printing until it removed the interview, he told Mada Masr.

The interview however was leaked on social media.

According to rights lawyer Ahmed Ezzat, there is no law giving intelligence services the right to stop the printing of any publication. Halting printing and rescinding publications is a right only given to those with arrest powers, which do not include the intelligence services. Such procedures are not based on laws, but rather on internal and administrative understandings, Ezzat said.

Ragab believes the reason the interview annoyed security services is because they weren’t asked to review it before printing.

“There is a struggle over who has the right to narrate history,” he said. “The state is trying to monopolize this right.”

Ragab says a number of points in the article are different to the original version. These include an assertion from Gibrael that former intelligence chief Omar Suleiman wasn’t working for the intelligence services before heading them, but started as a military officer, before moving through military intelligence to state security.

Gibrael’s interview also suggested that any agent who spends more than four years in Israel is a double agent, referring to the television character of Raafat al-Haggan, who he says was presented in a good light.

Gouda said in the interview that the intelligence services didn’t give ousted President Mohamed Morsi any correct information during his presidency, as they saw him as a “traitor.”

He claimed Ahmed Shafik was the actual winner of the 2012 presidential election, and the result was changed under pressure from the US. He also said that former chief of the Armed Forces, Field Marshal Mohamed Hussein Tantawi, had known from the beginning that Morsi was engaged in espionage with foreign bodies, but didn’t do anything about it.

“After the interview was published, we realized that Gouda wasn’t an intelligence agent nor was he a brigade,” Zayat said.

Raafat Shehata, head of the intelligence services during Morsi’s term in office, had made statements denying they had given the former president false information.

“This is not the journalists’ problem, it’s the intelligence service’s problem,” he said. “If somebody makes statements, it is the journalist’s right to relay what he was told.”

Zayat, however, asks why the interview was pulled after five installments had already been published and the sixth had been sent to the print house. “It needs to be made clear why and when it was banned and based on what standards.”

“As long as there is no decent law regulating this process, then everything is available, and mistakes are likely,” he said, adding that this law is supposed to set clear criteria for journalists and the state regarding what can be published.

“Without a decent law on the exchange of information, we will continue to succumb to the whims of all, and their assessment of what should or should not be published … The only solution is that security bodies respect the right to information and the state issues a law regulating it,” Zayat said.

Similar incidents have occurred over the past few years. Ragab recalls a time when tens of thousands of Al-Masry Al-Youm’s copies were discarded in 2010, after the authorities objected to a report on the newspaper’s front page about the spread of posters endorsing Omar Suleiman for president during his term as intelligence chief under Mubarak.

An edition of Al-Badil newspaper was banned for its coverage of the Shura Council fire when Khaled al-Balshi was chief editor in August 2008.

“We learnt from Al-Ahram’s print house that there were orders to halt printing, and we were asked to change our coverage,” he recalled. “I refused and insisted that it be printed, but to no avail, so we published our coverage on the website.”

“There is always illegal censorship over newspapers inside their print houses,” he said, “but we had moved past stopping printing years ago, and what is happening now is a clear violation and a regression to the Mubarak-era.”

“If they can stop the printing of a newspaper, what will they do with websites and social media networks?” Zayat asked.

“Let’s pretend that the Shura Council fire happened today, and security stopped Al-Badil from printing. Would they prevent citizens present on the scene from relaying information via Twitter and Facebook?” he asked. “They need to understand that someone in a remote Pakistani village relayed to the world minute by minute the killing of Osama Bin Laden. Times have changed.”