Egypt’s art museums: Out of sight, out of mind

Tucked away in the bustling commercial street of Mohamed Pasha Said in the Janaklees district of Alexandria is an Italian stone mansion housing one of Egypt’s most valuable treasures. This building, however, doesn’t hold any Pharaonic busts or mummified corpses, but the state’s collections of three of Egypt’s most important artists from the 20th century.

The Mahmoud Said Complex, as the mansion is known, is divided into three levels; the lower floor acts as a storage facility, while the middle floor houses a collection of works by acclaimed painter Mahmoud Said (1897–1964) and, finally, the upper level houses the collection of the brothers Seif and Adham Wanly. I had the rare opportunity to visit this incredible collection earlier this year along with a number of other shuttered museums. I say rare opportunity because the museum has been shut to the public for a number of years.

Among the works at the Mahmoud Said museum is a giant mural measuring 2.7 x 4 meters from 1947 titled The Inauguration of the Suez Canal. The value of the work is perhaps several million US dollars. After all, Les Chadoufs, a much smaller (89 x 117cm) 1934 painting by Mahmoud Said, sold for US$2.4 million at a Christie’s auction in Dubai in 2010 – the most expensive artwork by an Arab artist until the record was broken when an artwork by Turkish-Jordanian modernist painter Fahr El-Nissa Zeid sold for $2.7 million in 2013.

While the staff of the Mahmoud Said museum was helpful and enthusiastic – seizing the opportunity to guide a visitor around the masterpieces – the conditions these works were stored in were less than ideal. In one of the museums I visited in Cairo and Alexandria, century-old canvases were stored in a completely inappropriate manner, with the heavy wooden frames of some works resting not on another frame but on the canvas itself, creating an impression in the painting. In another museum, a dripping air-conditioning unit was blowing directly at the artwork from behind, causing it to swing. None of these museums had any security cameras and many of the works were exposed to the elements.

The Mahmoud Said mansion isn’t the only shuttered art museum in Egypt. A museum housing the collection of acclaimed sculptor Mahmoud Mokhtar was shuttered several times in the past two decades, for years on end, and finally reopened in 2012. Since 2011, the Egyptian Modern Art Museum has basically been shut although staff have been there everyday. On Monday, Egyptian officials partially inaugurated the museum, which host a collection of 12,000 artworks. 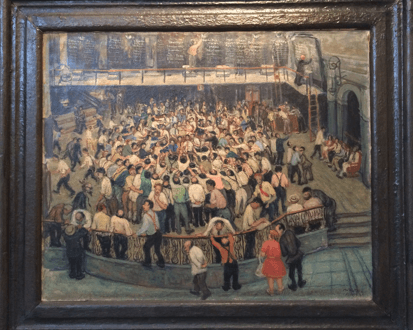 Egyptian sculptor and painter Adam Henein, born in 1929, inaugurated his private museum in January 2014 in Cairo’s Al-Harraniya district. A labor of love, Henein funded the museum from the sale of his works, allowing visitors to view sculptures and paintings by one of the most acclaimed Middle Eastern artists.

In August 2010, the artistic community in Egypt was shocked to learn of the theft of a Vincent Van Gogh masterpiece titled Poppy Flowers from the Mahmoud Khalil Museum in Giza. The artwork, estimated to be worth $50 million, was never recovered and no officials were held accountable. As a result of the unfortunate theft, the Mahmoud Khalil Museum, which houses paintings and sculptures by impressionist masters such as Monet, Renoir, Rodin and Gauguin, has never been reopened to the public. To be fair, art theft ranks as the fourth-largest criminal enterprise; it is an international industry worth $6 billion annually and staffed by underground professional thieves.

Some of the top museums in the world, including the Louvre in Paris and the Vincent Van Gogh Museum in Amsterdam, have been targets of art heists. A case similar to the Mahmoud Khalil Museum theft is that of the Isabella Gardner museum in Boston, which fell victim to an elaborate robbery in 1990 that saw 13 artworks stolen, including masterpieces by Rembrandt and Vermeer. Unlike the Mahmoud Khalil Museum, however, the Gardner Museum was soon after reopened and a reward of $5 million offered for information leading to the recovery of the works.

A closed museum has few ties to the community. Children grow up not visiting the museum and therefore caring less about its content. Scholars and students and aspiring artists have no access to the works. The longer these buildings are shuttered, the less interest there is in seeing them reopen. Additionally there is less scrutiny now about the conditions these works are kept in. Egypt’s art museums have the potential to compliment the vital tourism industry, offering additional attractions for tourists to spend more time in the country.

Finally, reopening a museum is not an end in itself. In order to avoid the mistakes of the past, these museums should install advanced security cameras, employ professional guides, create websites, improve the lighting, labeling and curation of the works, publish books and catalogues and host exhibitions to keep visitors coming.

The Egyptian government’s move to reopen the Egyptian Modern Art Museum is a significant step forward. There now needs to be a collective effort by Egyptians to visit, learn and promote these treasures to their friends, family and followers on social media.

Dreams at the Aqsa Mosque by Mohamed Riad Said (1937), housed in the Egyptian Modern Art Museum.

Photos courtesy of the author.

AD
You Might Have Missed
What we talk about when we talk about trees
Carbon Colonies & A Green New Deal
Where do old lesbians go to die?
Mugamma revisited: Reimagining the building and the square
AD
Sultan al-Qassemi
2 articles on Mada

Topics
Related
American University in Cairo
The 2nd Egyptian Scenography Exhibition and the shadow of the state
Ismail Fayed | Ismail Fayed is left wondering if the regime is asserting the presence of the military even through niche
Alexandria
Atelier Alexandria: The persistence of the state
Sohier Amin | It seems that a serious generational gap may be threatening this well-preserved ecosystem that has sustained
Coptic Museum
Weekly spotlight on state culture: Egypt plans for Intntl Museums Day
To celebrate the 2014 International Museums Day on May 18, the Antiquities Ministry is curating two exhibitions
colonialism
A critical journey: On Mahmoud Khaled’s ‘Painter on a Study Trip’
Ismail Fayed | Is the audience's relationship to fine arts is the same as their relationship to colonial cosmopolitanism?