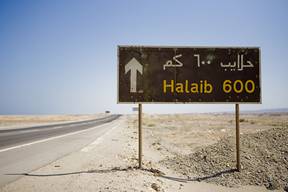 Sudan will not relinquish its claim on the disputed Halayeb Triangle territory at the Egyptian border, the country’s Foreign Affairs Minister Kamal Ismail told the Sudan-based Al-Shorouq media network on Thursday.

Anxieties over controlling this strategic area off the Red Sea coast recently came to a peak when Egypt warned its southern neighbor to back off plans to include the resource-rich territory as a voting constituency in its 2015 elections.

“Halayeb is a part of the Egyptian territories and Egypt will defend [every] inch of its soil,” Egypt’s Foreign Affairs Ministry spokesperson Badr Abdel Atty declared in a September 10 phone interview with the Al-Qahera Al-Youm program. He dismissed Sudan’s claims to the area as an attempt to provoke the Egyptian government and create a rift between the two countries.

The contested border area has been under de facto Egyptian administration since the mid-1990s, but both countries have jockeyed for its control for over a century.

The 1899 border drawn by the United Kingdom pushed Halayeb into Egyptian territory, but when the UK revised the border line in 1902, Halayeb shifted back into Sudan, which at the time was under joint UK-Egyptian rule. After Sudanese independence in 1956, Sudan and Egypt ruled Halayeb jointly.

However, diplomatic battles were ignited when Egypt deployed its military to the area in the 1990s, angered by Sudan’s attempt to grant water rights to a Canadian oil company, and accusing Khartoum of involvement in a 1995 plot to assassinate former President Hosni Mubarak in Addis Ababa.

Egypt has effectively maintained control of the area ever since, and has been actively investing in the lands.

Khartoum repeatedly called on international courts to step in, but largely remained quiescent on the issue until the 2011 revolution. Shortly after Mubarak’s ouster, a senior Sudanese official called on Egypt to remove its military forces from the territory and relinquish administrative control. The situation quieted down when in May of that year, Egypt’s transitional government announced it would jointly administer Halayeb with Khartoum, and began talks to develop a free trade zone there. Diplomatic negotiations continued in a positive direction under former President Mohamed Morsi’s administration in 2012.

However, the battle reignited when in November 2013, the Egyptian Cabinet announced a multi-million dollar development plan in Halayeb, including an Armed Forces-supervised project to exploit gold and minerals in the area, according to the US-based media site Al-Monitor. Egypt’s transitional government then established a voting station in Halayeb during the January 2014 constitutional referendum, further provoking Sudan’s ire and prompting Khartoum to renew its calls for international arbitration.

However, both administrations have also avowed that the dispute would not become a source of animosity between the two nations.

Relations between the governments have been even further strained in recent years as they continue to square off over the Ethiopian Renaissance Dam project, which Egypt fears could divert a significant share of its waters to its southern neighbor.