The conscript in Egyptian films: Part 1

A Central Security Forces conscript was reported killed in North Sinai on September 4. An officer apparently beat him to death with a stick. As a news reporter, I called the sources, confirmed the facts, wrote the article and sent it to the editor. A moment later, I realized that in four months I could be that soldier.

Meanwhile, a glance at the news shows that dozens of ill-equipped, untrained soldiers, thrown into the middle of nowhere, are regularly attacked by what the state calls “terrorists.” Hundreds of conscripts are stationed as pawns to confront the state’s enemies, and this is not the first time.

Egyptian cinema may be criticized for poor effects, overrated acting and commercial tendencies. Yet it does discuss controversial topics in the society it comes from, as art should. One such topic is military conscription. Here’s the first part of a brief history of the conscript in Egyptian film.

Early on, the draft was associated with colonialism. In Wadaan Ya Gharamy (Farewell My Love, 1951), it is the catalyst for tragedy.

Fikraya (Faten Hamama) and Rashad (Emad Hamdy) fall in love and get engaged, but then he gets drafted. As a punishment for not becoming a lawyer, Rashad’s family refused to pay the money to exempt him from military service so that he would learn some discipline. The relationship ends and Fikraya eventually marries an older army officer, whose stick orderly happens to be Rashad. 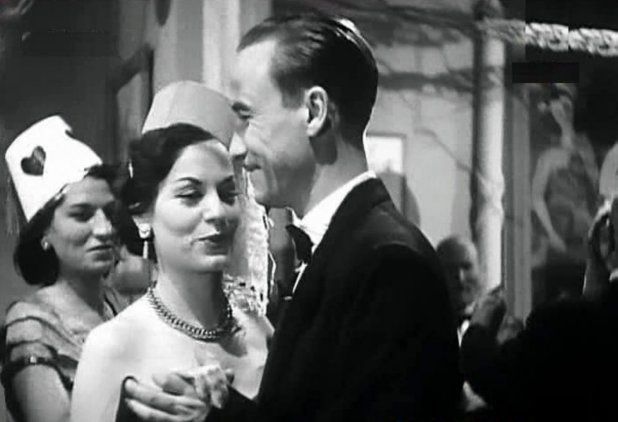 In 1966, Ali Badrakhan directed Sayed Darwish, a biopic of the Egyptian singer that highlights the enslavement of the poor by the ruling regime for the benefit the British occupier. Darwish (1892-1923) created his works out of people’s aspirations and screams, performing in a period when egalitarian ideas were on the rise.

In the film, Darwish (Karam Motawea) is invited to perform at the wedding of a well-off village mayor during the first world war. As he arrives, he sees policemen arresting villagers and sending them into forced labor in British camps. A middle-aged women bids goodbye to her husband. Darwish declares that he can’t sing at a wedding when farmers are mourning the loss of their loved ones.

“Oh, beloved eye, I want to go back to my country,” he sings. “Oh my country, the government has taken away my son.” (These words were by Mohamed Younis al-Qadi — a writer influenced by descriptions of poverty, and also the lyricist of Egypt’s national anthem.)

After a military regime took over in the 1952 revolution, another conscription narrative was swiftly established. From 1955 to 1959, popular comedian Ismail Yassin, who made numerous films with this name in the title, released five films as light propaganda for the army. 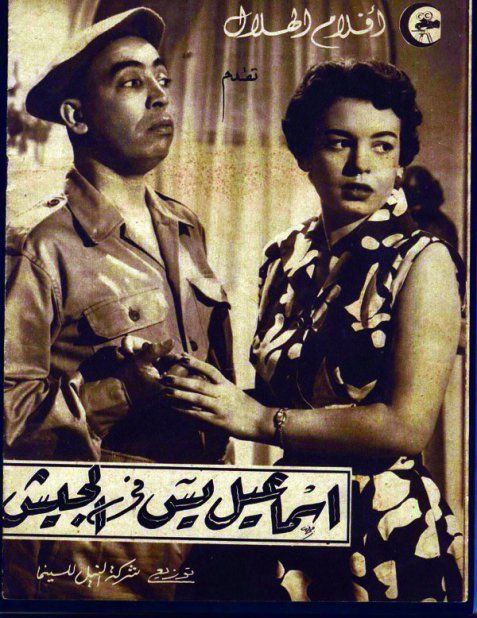 In each one, Yassin falls into different situations while doing his military service, whether arresting a mob, paying a dowry or marrying his sweetheart. Each time, he is shown to change after joining the military. Irresponsible, spoiled and unsociable, after joining up he becomes a good disciplined citizen. Playboy becomes dependable husband; the fool gains social acceptance as a military man.

Filled with enthusiasm, Yassin, whose acting mixes Charlie Chaplin’s style with that of Laurel and Hardy, goes to his local military unit, passes medical tests and survives the training. When put alongside the seriousness of the military institution and conflict, comedy shines.

Yassin’s soldier was always featured with the abusive sergeant Attia (Riyad al-Asabgi). Attia, who looks like Pete in the Disney film Donald Duck Gets Drafted (1942), abuses Yassin verbally and plots against him physically, in the satirical way that characterized Yassin’s comedy.

Designed to glamorize military life, Yassin’s films were one of the many vehicles at the peak of the 1952 military regime that praised the institution for changing the lives of young men for the better.

Later on, things became more complicated, with the 1956 Tripartite Aggression, the 1967 defeat against Israel and the 1973 crossing.

Although many films, such as Hossam al-Din Mustafa’s Al-Rasasa la Nizal fi Giby (The Bullet is Still in My Pocket, 1974), depicted the 1973 “victory” in weak nationalistic narratives featuring soldiers with decent haircuts and clean clothes, any mention of the sacrifice of thousands of conscripts was limited to the image found in booklets published by the military’s morale affairs department: Soldiers get on a boat, pass through the canal, raise the flag and listen to their commanders while observing the so-called Egyptian air strike.

Ughnia ala al-Mamar (Passageway Song, 1972), based on a play by Ali Salem and directed by Ali Abdel Khaleq, was arguably the first film to focus on the 1967 defeat from the soldiers’ point of view. Five soldiers defend a passageway after Egyptian forces retreat during a brutal Israeli offensive. The soldiers — unequipped, exhausted, low on food and water — lose contact with their superiors and refuse to retreat. 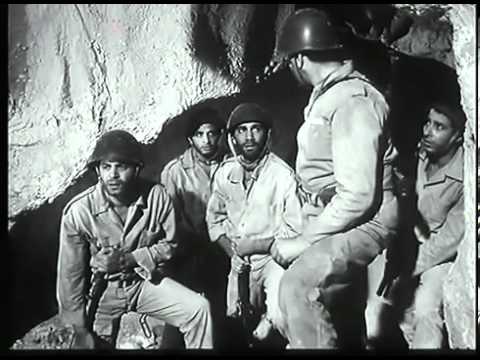 The film shows the normal, human side of its characters: The peasant farmer taken from his land, the revolutionary musician who won’t sell out, the ordinary worker who wants to get married, the idealist, and the opportunist husband who seeks to prostitute his wife.

The soldiers ambush several Israeli patrols in a guerilla-like style before starting to collapse. The singer composes a song, Tea’shy ea Dehket Masr (Egypt, May Your Smile Live), the words of which were written by poet Abdel Rahman al-Abnudi. The soldiers chant it as a symbol of resistance against the Israeli troops’ calls for surrender. Although the film ends with only two of the five left to keep guard, the last scene shows the singer walking the streets of Cairo at dawn and hearing a group of workers chanting his song. Most of them die, but the song doesn’t.

Although Passageway Song is not based on a true story, it historicized the tale of thousands of conscripted Egyptian soldiers who, due to inefficient military leaders, were left behind in a haphazard retreat in Sinai, and became an easy target for Zionist fighter jets.

Ultimately, conscription in Egypt is a tool to militarize society and keep the state alive. As millions of young men serve with almost no monetary return in an exploitive environment, it was probably inevitable that the portrayal of the conscript in film would become more controversial.

Part 2 of this two-part series is here.

AD
You Might Have Missed
Carbon Colonies & A Green New Deal
Mugamma revisited: Reimagining the building and the square
What we talk about when we talk about trees
Where do old lesbians go to die?
AD
Adham Youssef
9 articles on Mada

Topics
Related
Adel Imam
The conscript in Egyptian films: Part 2
Adham Youssef | Having swung from anti-colonial to glamorizing before becoming more complicated due to conflict, conscription
Central Security Forces
Officer beats 20-year-old CSF conscript to death for reporting sick
.
cinema
On the seven films of Tawfiq Saleh: Militant with a camera
Adham Youssef | It wouldn’t be easy to definitively categorize Tawfiq Saleh as a Marxist filmmaker, but his works are
Egypt's cinematic gems
Egypt’s cinematic gems: The Sparrow
Alia Ayman | This overlooked masterpiece, once banned, ends with a hysterical call for continued resistance