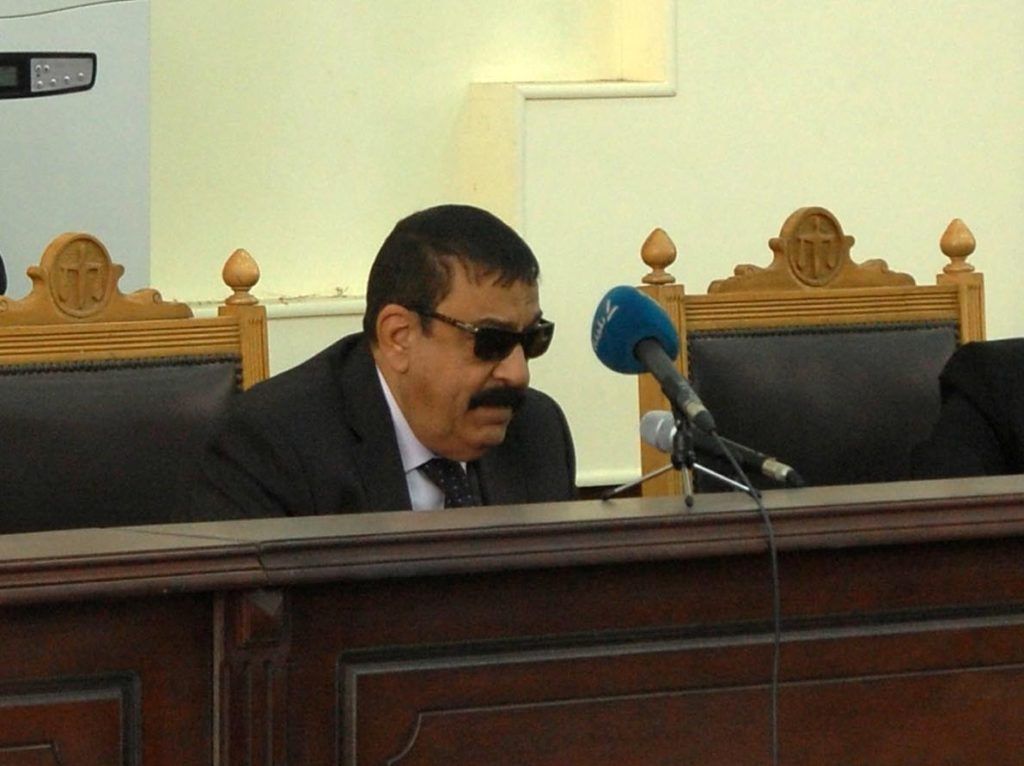 After beginning four hours later than scheduled, the latest session in the so-called Cabinet clashes trial was once again fraught with divisive tension between defense lawyers and the Cairo Criminal Court. When the defense team accused the presiding judges of excessive cruelty and filed a request for them to be recused, the judges ignored their motion and instead moved to adjourn the trial to September 23.

The trial stems from a five-day battle between protesters and security forces that began on December 16, 2011. Police and military forces attacked a sit-in opposite the Cabinet building organized in protest against the Supreme Council of the Armed Forces’ decision to name Hosni Mubarak-era politician Kamal al-Ganzouri as prime minister. Security forces dispersed the sit-in on the first day, but the violent altercations with protesters extended into the following week and expanded into nearby Tahrir Square. The violence claimed 18 lives.

While no charges have been brought against security forces, 269 protesters — including noted activist Ahmed Douma — are now on trial for alleged “illegal assembly, possession of weapons and Molotov cocktails, assaulting members of the Armed Forces and police, burning the Institut d’Egypte, assaulting government buildings including the Cabinet, the Parliament and Shura Council, and attempting to break into the Ministry of Interior with the intention of burning it.”

Headed by Judge Mohamed Nagy Shehata, the court initially rejected Douma’s request to leave the glass defendant’s cage as he was in poor health due to his ongoing hunger strike. The court also rejected a request to allow Douma’s wife, Nourhan Hefzy, to attend the session.

Shehata then refused to allow Douma to leave the cage to watch video evidence against him presented by the prosecutor, or to hear it from the cage.

The evidence elicited sarcasm from attending defense lawyers. The first video showed a number of photos from the Cabinet clashes set to the soundtrack of a Bedouin song. Other video evidence included footage of an Armed Forces member dragging a protestor on the ground, and a video entitled “Who’s beating who?” that showed a rock-throwing battle between protesters and a number of soldiers, again with music playing in the background.

Khaled Ali, the head of the defense team, demanded that the prosecution provide names for each of the videos, to give the defense a chance to comment on them at the end.

The video screenings paused briefly when the defense objected to the judge dictating orders to the court’s secretary which the lawyers could not hear. The judge then asked Ali to stop intervening and to calm the young lawyers on the defense team, as he was “capable of running the session on his own.”

The prosecution then played a segment titled “They lie before us along with their lies” from the satellite television show “Akher Kalam,” hosted by journalist Yousri Fouda. This was followed by another segment from the same show in which Nour Ayman Nour gave his testimony on the incident, and another segment titled “The testimony of a man who attempted to save our honor,” in which Hassan Shahin recounted his memories of the event.

A video of soldiers throwing rocks at protestors from the roof of a building, a compilation of footage set to music that showed soldiers committing other violent acts, two segments from other television shows and a video testimony recounting torture inflicted by the Armed Forces rounded out the evidence.

The defense then requested to check on Douma’s health condition inside the cage, as they were unable to see him. Lawyer Osama Mahdy was allowed to see the defendant, though the judge asserted that Douma was fine. Shehata then refused Ali’s request to allow Douma to leave the defendants’ dock, as Douma said he “couldn’t stand anymore because it was very cold.”

Douma then recited a letter recounting how prison guards beat him before the previous court session after he said he was too ill to attend. He claimed that he was then moved to a closed room for three hours without ventilation or a medical bed, and that the guards initially refused to allow him to enter the courtroom in a wheelchair. He added that he didn’t feel safe before the court, and was “afraid of dropping dead during one of the sessions.”

Douma declared that the judicial process was a deliberate infringement on his rights as a human being and as a defendant. He claimed that the prison administrator told him that they were forced to bring him to court for the last session even though he was ill, and that the beating was ordered by the head of the court.

“I truthfully announce that I don’t trust the procedures of this trial due to feuds between me and the court, which declares its hatred of the January 25 revolution and those affiliated with it,” Douma said, requesting that the judges recuse themselves from the case.

“Today’s videos prove who the real criminals in the Cabinet building events are, so I don’t care if I remain in prison for 100 more years,” Douma continued, adding that “the officers told me it’s impossible for them to let me out of the cage because I would gain the public’s sympathy if they saw me in a wheelchair.”

The judge insisted on continuing to view the video evidence without commenting on Douma’s letter. Ali accused the court of “excessive cruelty against the defendant,” and threatened to leave the session unless Douma was allowed outside the cage.

Lawyer Naser Amin added that the situation was now beyond procedural requests, pleading, “We are now in front of a humanitarian request of a defendant who’s letting the court know that he can’t stay inside because of his health condition.”

Since the judges didn’t respond to the defense’s requests and refused to recuse themselves, the defense demanded that the case be postponed until adversary procedures were taken. The lawyers filed a service of process listing the defense’s demands which the court refused to uphold.

“We will have to file a request to recuse the court against our wishes,” Ali declared, meaning the defense team would file a request with the Court of Appeals to transfer the case to another courtroom. After suspending the session for a few minutes, the judges then announced that the case would be adjourned to September 23, but remained steadfast in their refusal to recuse themselves or to uphold the rest of the defense’s demands.

At the end of the session, courtroom security compelled journalists and photographers to leave before allowing Douma to exit the cage, which his lawyers claimed was an attempt to prevent them from reporting on his deteriorating health condition.

Douma began an open-ended hunger strike against his imprisonment on August 28. Early in September, the National Council for Human Rights recommended that he be allowed external healthcare due to his poor health, but the prison authorities have yet to accommodate that request.

The judge presiding over the Cabinet clashes trial has gained recent notoriety for meting out harsh sentences that many decry as politically motivated. Earlier this year, Shehata sentenced seven defendants in the Al-Jazeera English case to seven years in maximum security prison on charges of circulating false news and supporting terrorism while covering the events surrounding former President Mohamed Morsi’s ouster. He sentenced 11 others in that case to 10 years imprisonment in absentia.

In another case, Shehata sentenced Muslim Brotherhood Supreme Guide Mohamed Badie and 13 other Brotherhood leaders to death for their role in violent events at the Istiqama Mosque in 2013, though the Grand Mufti refused to uphold the death sentence due to lack of evidence. Shehata also verbally assaulted Brotherhood leader Salah Soltan, telling him to “shut up” during a session of the so-called “Rabea operation room” case.

During the previous Cabinet clashes court session on September 3, Shehata referred defense lawyers Osama al-Mahdy, Mahmoud Belal and Basma Zahran to the general prosecutor for investigation on charges of inciting riot and interrupting the session’s proceedings.

In June, the African Committee for Human Rights announced that it would review a complaint against state authorities filed by the families of victims in the Cabinet clashes — an unprecedented incident of an international court agreeing to look into charges of police brutality and murder levied against the Egyptian state in the aftermath of the January 25, 2011 revolution.