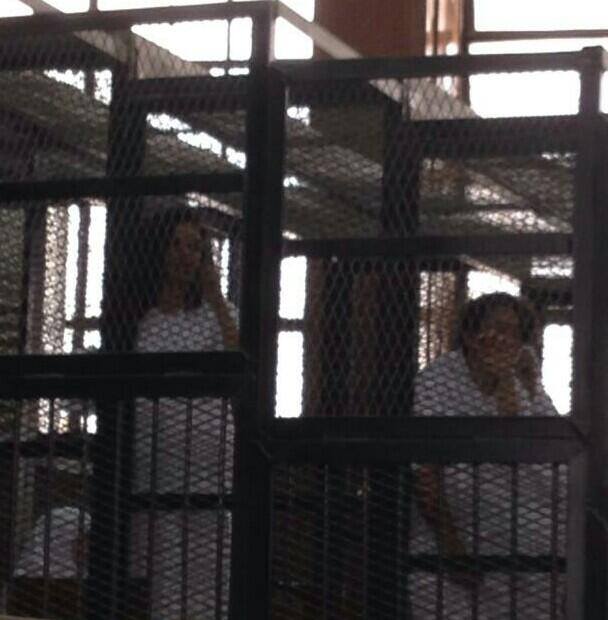 A Cairo misdemeanor court decided on Saturday to postpone the case of Ettehadiya protesters to October 11, while continuing to detain the defendants pending trial.

21 of the defendants arrested while protesting the anti-Protest Law in June have been detained since then, while another two defendants in the case have been released pending trial. This is the second extended delay in the case. Following the first session in June, the judge delayed the case while keeping the defendants detained for 75 days.

The session started in the deliberation room as the main courtroom was occupied. The judge allowed journalists to attend the session, but cameras were forbidden.

During the session, 11 videos that were presented by the prosecution as evidence against the defendants were shown. However, the court was not able to identify any of the defendants in the videos.

The footage included scenes from the march until it was attacked by people in civilian clothes accompanied by police forces.

The technical report that the defense had requested in the previous session revealed that the video had not been edited. However, it failed to determine the date and timing it was taken.

Tarek Abdel Al, another lawyer on the defense team, demanded the release of the defendants, arguing that the criteria for detaining a defendant on trial — which is limited to the risk the defendant poses of influencing the case or being a danger to national security — are not present. He added that there is no evidence against the defendants.

Abdel Al asserted that detention while on trial should not turn into punishment in and of itself, stating that the defendants have already served three months in prison for no reason.

Two other members of the defense team separately presented two invoices to prove that defendants Samar Ibrahim Mahmoud and Hanan Mostafa Ahmed were in the vicinity of the protest running errands and were arrested randomly.

The lawyers argued that the case is political in the absence of any criminal evidence against the defendants. They also demanded the transfer of the trial from the Police Academy in Tora, where the session is currently being held, to the Heliopolis court, its standard location.

Another member of the defense team, Yasmine Hossam al-Din, reported being verbally and physically assaulted by the guards at the gate of the Police Academy and has made an official complaint in this regard.

The defendants face charges of illegal assembly, violating the Protest Law, possession of explosives, show of power and use of violence to terrorize citizens.