In 1967 Egyptians witnessed many grand historical moments. It was the beginning of the end of the pan-Arab project: Arab armies were humiliated, land was lost, Gamal Abdel Nasser resigned, and people took to the streets calling on the beloved leader to stay in office. These moments of defeat and resistance inspired as much as they devastated many writers and filmmakers who lived through them.

The charismatic yet broken pan-Arab leader announcing his resignation and subsequent mass protests inspired the finale of Youssef Chahine’s relatively overlooked film Al-Asfour (The Sparrow, 1972). The film ends with a hysterical call for continued resistance.

“We will fight the war,” screams Bahiya (Mohsena Tawfik), the main female character, as she runs down the street in shock after Nasser’s televised speech. Yet The Sparrow is not concerned with redundant narratives or state-constructed myths of a people’s greatness — it is instead a self-critical take on a nation’s failure and political decay.

Chahine is one of the greatest auteurs of Arab cinema. In addition to lesser-known shorts and documentaries, the most famous of which is the documentary Al-Kahera Menawara Be Ahlaha (Cairo As Seen by Chahine, 1991), he made 36 feature films, many of which won numerous awards locally and internationally. Throughout the six decades of Chahine’s career, his cinematic style changed and evolved significantly.

The 1967 naksa (defeat) has featured in many Egyptian films and soap operas. Chahine, however, being the antidote to mediocrity that he was, couldn’t let those six days, or more accurately those six hours, of war pass without pushing the stylistic limits of what it means to make a film about the naksa.

It was a turning point for many Arab artists, filmmakers and intellectuals. Losing the war was a heavy blow and many became disillusioned with what was once a blind faith in Nasser and his big promises. Chahine was not immune to the repercussions of this, and whether it was the defeat itself or his own artistic maturity at a time of despair, 1967 marked a significant transition in his career as well.

In 1969 he turned Abdel Rahman al-Sharkawy’s novel Al-Ard (The Land) into a cinematic masterpiece. The film, theatrically released with significant success, tackled villagers’ struggle against feudalism in the 1930s and included many scenes that have become canonical for Egyptian cinema.

Another post-1967 masterpiece is Al-Ikhtiyar (The Choice, 1970), for which Chahine collaborated with Naguib Mahfouz, who wrote an incredible screenplay. Superficially, the film appears to revolve around a murder. On closer look, it is a poetic portrayal of philosophical and ideological dualities which culminates in a sensual feast for the intellect. It amplifies Chahine’s departure from conventional cinematic devices and the beginning of his phase of heavier experimentation, of which The Sparrow is another stark example.

The subtlety of contemporary politics in The Choice and The Land is followed by explicitly political critique in The Sparrow, which acts as a loud statement against the corruption of Nasser’s regime, holding government officials and their private-sector allies responsible for the defeat. 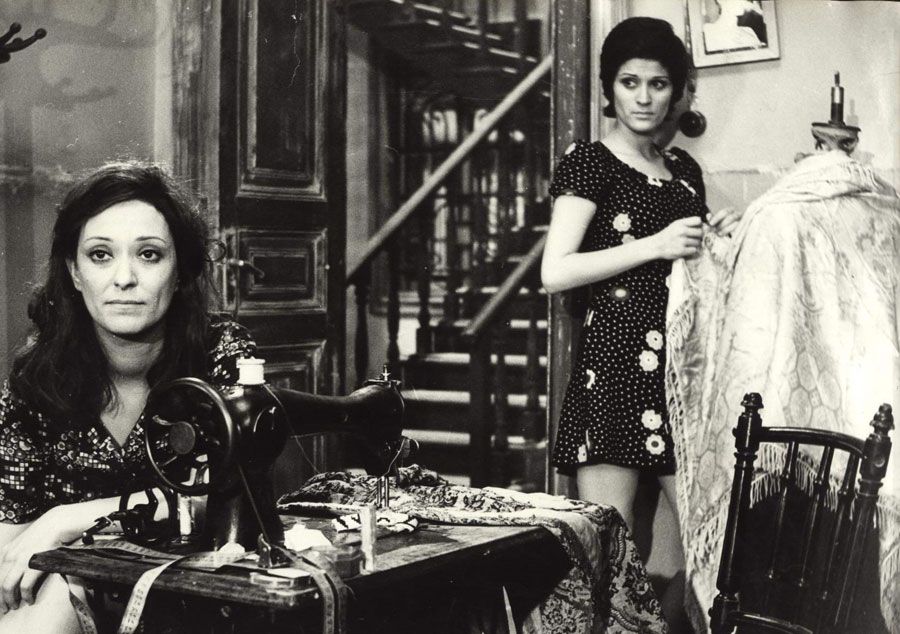 An Egyptian-Algerian coproduction, The Sparrow is one of Chahine’s lesser-known films, and there is a reason for that. The film was produced in 1972, but the Egyptian censorship board immediately banned it for two years. Instead of dwelling on the romantic moment when the masses expressed their love for their defeated leader by refusing to accept his resignation, Chahine portrayed the parallel temporality of regime-orchestrated theft, murder and corruption. It was too much for the censorship board and everything it represented, especially in the years before the salve of the 1973 “victory.”

The screenplay is a collaboration between renowned leftist writer Lotfy al-Khouly and Chahine. Rumor has it that Khouly was inspired to write the short story on which the film is based (also The Sparrow), after hearing Ahmed Fouad Negm recite his poem Bahiyya when the two were together in prison. Chahine decided to recreate the story for the big screen, and approached Negm and Sheikh Imam to produce the song Bahiya for his soundtrack. The haunting poem/song is an overarching theme in the film. Sheikh Imam sings it through the opening credits, and almost all the lead characters also sing it at some point.

What at first appears to be the main plot is the hunt for Abu Khadr. We never see him, but we know he was involved in robbing an Upper Egyptian factory of its expensive machines, a robbery that left the factory’s guard murdered. Abu Khadr works for bigger crime lords who also happen to be executives in Nasser’s Arab Socialist Union. They used him to get the machines out of the factory, and then worked with the police to kill him during the arrest to cover up their involvement. Everybody is looking for Abu Khadr.

As a villager asks the policeman and son of a leftist musician, Raouf (Seif Eddin): “Who will find him first? You and the police, or the journalist? Or those who betrayed him? Or us, the forsaken? Everyone wants to find Abu Khadr, each for their own reasons.”

A film that revolves around a search for a criminal in hiding could have made a classic thriller, but Chahine opted instead for a more fragmented, sophisticated narration. Multiple subplots drive the film, each with its own subtle climax.

The war is one. Raouf’s brother is in the army. He appears only twice, and as soon as we are ready to forget him, his letters start arriving with glimpses from the front in Sinai. The war subplot culminates in a typically psychoanalytic take on sex and aggression as Chahine beautifully films Raouf’s very Freudian dream on the eve of the defeat.

Also among many well-crafted subplots that only emerge toward the film’s end is an abrupt romance, a promise of a love triangle, a story of mourning and a cross-generational infatuation. Too many promises of over-made melodramatic developments appear throughout the film, but thankfully none are fulfilled.

The center in The Sparrow’s plot is elusive. Perhaps it’s the war. Quite possibly it’s the stories of ordinary yet not so ordinary people that Chahine brings to life through his renowned penchant for closely directing actors. Maybe it’s the story of Bahiyya, whose name we hear repeatedly but whose story we come to only know toward the end and never really know it. Maybe not. Maybe the center of the film is the very lack of centrality.

With all its overlapping sub-plots, the film destabilizes narrative itself and presents its viewer with glimpses, abrupt cuts; a collage of a historical moments that are at once multiple and harmonious.

Chahine’s signature tracking shots, concise dialogue, and experimentation with thematic rather than linear editing consolidate this brilliantly constructed narrative fragmentation. There is no single story of which we await the resolution. Characters come and go, stories begin and fade and the cornerstone of the film remains untainted: corruption itself as the other face of defeat. 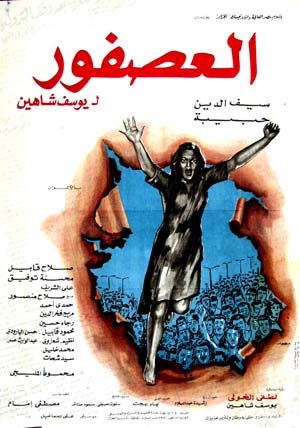 The Sparrow will screen as part of a Youssef Chahine retrospective at Zawya during the second week of September.

AD
You Might Have Missed
What we talk about when we talk about trees
Carbon Colonies & A Green New Deal
Mugamma revisited: Reimagining the building and the square
Where do old lesbians go to die?
AD
Alia Ayman
3 articles on Mada

Topics
Related
cinema
On the seven films of Tawfiq Saleh: Militant with a camera
Adham Youssef | It wouldn’t be easy to definitively categorize Tawfiq Saleh as a Marxist filmmaker, but his works are
Ahmad Abdalla
What musical repression?
MF Kalfat | MF Kalfat takes an in-depth, critical look at Ahmad Abdallah's film Microphone and its treatment of Egyptian
Al-Ahram
Mostafa Hussein and mentioning the sins of the deceased
Andeel | Mentioning the good deeds of a deceased Mostafa Hussein, Abdallah Kamal or even Salah Jahin is a contribution
cinema
Egypt’s cinematic gems: ‘Land of Hypocrisy’
Amany Ali Shawky | Fateen Abdel Wahab’s comedic approach does not strip Youssef El Sebai’s novel from its crafty denunciation.