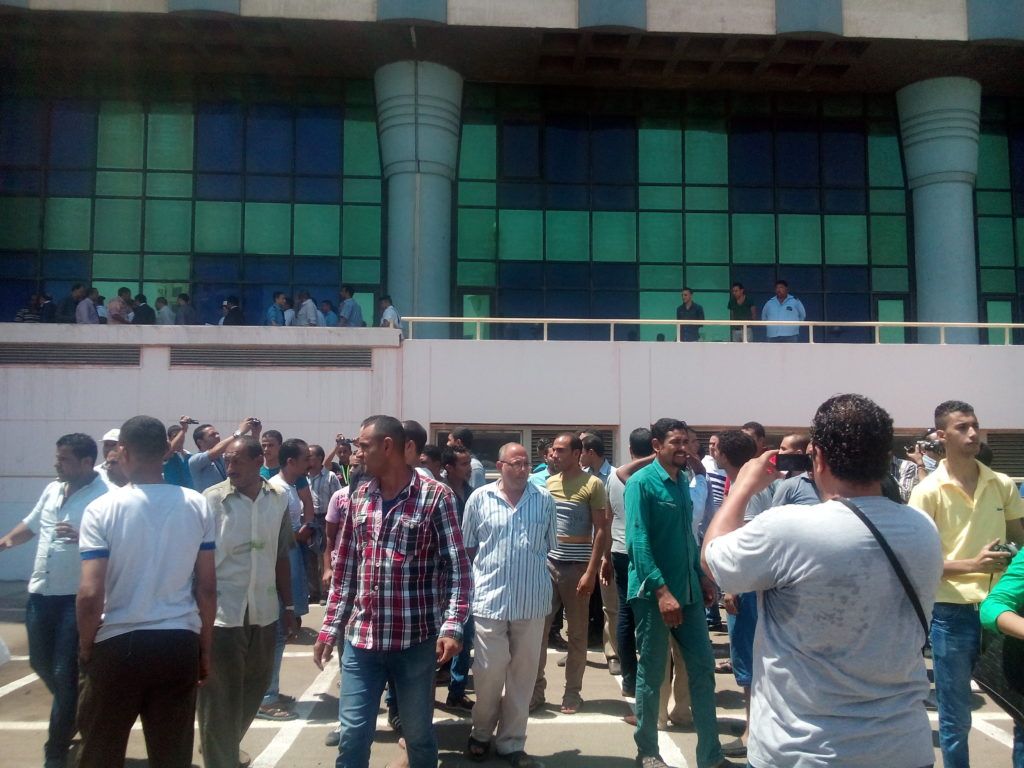 On Sunday morning the streets were clear of vendors, but jam-packed with security forces, armored vehicles and military police.

Cairo Governor Galal Saeed had announced last July that street vendors would be temporarily moved from downtown to the Turgoman parking complex, before being eventually moved to an abandoned piece of land in Abdel Moneim Riyad Square.

Amid the heavy security presence, street vendors were forced to move to the Turgoman parking complex. Inside, hundreds of vendors were stood, giving interviews with different television channels objecting to the decision to move them.

“Nobody will come here,” Mohamed Abdel Fadil, a street vendor from Talaat Harb said. “The customer does not come specifically to buy, he may be walking past Talaat Harb Street to 26 July Street and see the merchandise and buy from it, but nobody will see us here.”

Abdel Fadil says that most of the street vendors downtown agreed to move to the land in Abdel Moneim Square when it is ready for them. “But they told us we would have at least three more months,” he said. “We’d rather stay home during those months than come work here.”

One of the problems facing Abdel Fadil and other street vendors in their new location is the cost of the merchandise and their ability to sell it within a specific and brief period of time so they can pay off their suppliers.

Hassan Mohamed, another street vendor in Talaat Harb, said that the names of street vendors were gathered more than once, most recently last month, but that most of the old vendors didn’t find their names on the lists that will determine the allocation of space in the parking complex.

Ragab Mahmoud echoes his sentiment. “I have been here for seven years on Talaat Harb Street, my name was taken when they were gathering names but I cannot find it on the list today.

“Even if my name was there, there is another problem with the space allocated for every vendor, it is too small for the merchandise,” he told Mada Masr.

The Turgoman parking complex has been divided into squares with numbers, each allocated to a vendor. Three quarters of them are sheltered from the sun.

Yassin Abdel Bary, head of the Western Cairo municipality, told Mada Masr that a committee was formed — comprising of members of the Street Vendors’ Syndicate — to gather the names of the vendors and come up with a list of 500 people.

“The new names will be gathered today and presented to the committee to clarify why they were not included and a decision on the matter will be issued in two days,” he said.

Abdel Rahman Mohamed, secretary general of the Street Vendors’ Syndicate, told Mada Masr that he rejects the decision to move to the Turgoman parking complex.

“We were involved in gathering the names of the vendors, but for the move [to the piece of land on Abdel Moneim Riyad] not the parking complex,” he said. “The vendors have no problem moving, as long as it is to a place fit to trade in, but the parking complex is not suitable at all.”

Yasser Zaatar, deputy at the Bulaq Abul Ela Police Station, said that most of the new names are of family members of the vendors in an attempt to acquire more space.

Mohamed disagrees. “We exerted a lot of effort over the past few months to collect the names. A committee was formed of five different parties to guarantee transparency, but we were surprised to find other committees from the Cairo governorate doing the same thing separately, which is why around 10 percent of the vendors are not included in the lists.”

Abdel Bary says that this is a temporary situation that the vendors have to endure for another 6–8 months until the land on Abdel Moneim Riyad Square is ready. However, Mohamed sees this as unfeasible for vendors, “who make their living on a day to day basis.”

Mohamed accuses the Cairo Governor of trying to solve the vendors’ problems “at the expense of their livelihood.”

“What would happen if the government waited the remaining months and just moved the vendors directly to Abdel Moneim Riyad Square?”

“We know we’re wrong and we’re causing problems,” Mohamed said, “but this situation supports households and to solve it we have to guarantee that these households will continue to function.”