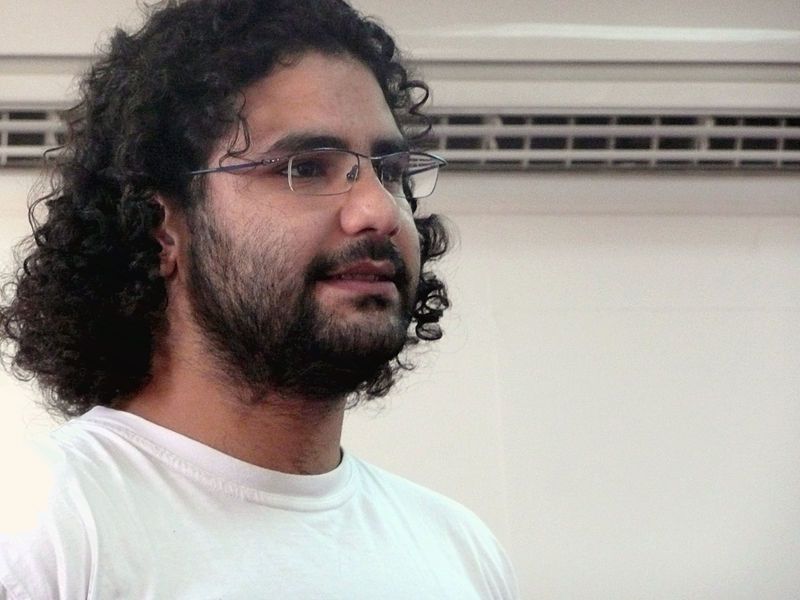 Abd El Fattah and 24 other activists were arrested on November 26 for participating in a non-violent street protest outside the parliament building in downtown Cairo. After he was released, pending the case, on June 11, a court sentenced him and the other defendants to 15 years imprisonment in absentia, along with a LE100,000 fine each for violating the Protest Law. Abd El Fattah was arrested at the court after the verdict was pronounced and a retrial later commenced.

According to a Facebook page administered by his family, titled “Free Alaa Abd El Fattah,” the activist’s hunger strike was partly prompted by a visit to see his hospitalized father on August 17. Upon arriving at the hospital Abd El Fattah found his father, lawyer Ahmed Seif al-Islam, in a coma.

Abd El Fattah chose “not play by their rules,” the Facebook page added, referencing the ruling regime and its security policies.

Contributing to his decision to begin a hunger strike, Abd El Fattah’s youngest sister Sanaa Seif was arrested with tens of others on June 21, while partaking in a peaceful protest outside Ettehadiya Presidential Palace. She remains in jail pending trial.

Abd El Fattah has been detained three times since the outbreak of the January 25 Uprising in 2011. During one of these periods in detention, he missed the birth of his son Khaled, and is currently not able to stand by his father’s side in his critical condition.

Another political prisoner languishing behind bars is 18-year-old Ibrahim Halawa, an Egyptian-Irish national who was arrested along with his three sisters during protests near Ramses Square last summer. While his siblings have been released, Ibrahim remains behind bars in Tora Prison, without any official charges being brought against him. He reportedly began a hunger strike, while still consuming liquids, in protest over his conditions and lack of due-process.

On August 8, two sisters Rasha and Hind Mounir commenced a hunger strike from Qanater Women’s Prison. The two were arrested while participating in an Islamist march near downtown’s Ramses Square on August 16, 2013. The sisters were both recently sentenced to 25 years in prison.

Another hunger striking political prisoner is Ibrahim al-Yamany, who has reportedly been on hunger strike for the past 126 days from Wadi Natrun Prison.

Like many other political prisoners, Yamany is an Islamist activist who supported the rule of former President Mohamed Morsi. There have been reports that he has been tortured in prison, although this has not been independently verified.

Egyptian-American Mohamed Soltan has also been on hunger strike for the past 205 days from Tora Prison. He was arrested whilst participating in a march supporting Morsi, although he hasn’t been formally charged.

Soltan has been admitted to hospital several times, as his health has markedly deteriorated and his life is said to be at risk.

Topics
Related
Alaa Abd El Fattah
Sanaa Seif and a generation that protects the revolution
Lina Attalah | “Each one of us, after this experience of the revolution, has something to say,” said Sanaa
hunger strikes
Hunger striking detainee Soltan back to prison despite health concerns
News about defendant Mohamed Soltan returning to his cell in Tora Prison from hospital has been circulating
Alaa Abd El Fattah
On the love of life and Alaa’s detention
Alia Mossallam | It is difficult to write about a friend like Alaa at a time like this. Difficult to write something that