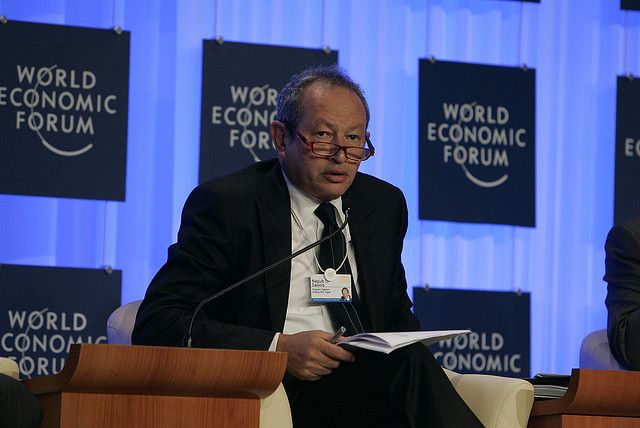 The spat started when Sawiris slammed Ali’s performance, calling him an “informer” for state security.

“Watching another episode by informer Abdel Rehim Ali will push me to sympathize with the Muslim Brotherhood,” he said on his official Twitter account.

Ali and his show have always sparked controversy, as he has frequently leaked private phone calls and messages from major political dissidents, mostly belonging to the ousted Muslim Brotherhood group, as well as activists backing the January 25 revolution.

In the last episode aired, Ali leaked a phone call between Sawiris and former vice president Mohamed ElBaradei, who he considers a traitor and part of a Western plot against Egypt.

Sawiris tweeted again in response, “If I am defamed by someone with little prestige, you know I am reputable.”

Following Sawiris’ comments, Ali waged a war on leading businessmen involved in his show and the news website they run, Al-Bawabah news. Ali told CNN Arabic that he wasn’t notified of the reasons for suspending his show, and confirmed that “he would not step foot in the channel again.”

The contentious anchor added that he plans to launch another channel under the same name as the suspended show in October, and will allocate 27 episodes to leaks about Sawiris.

The channel, owned by communications tycoon and businessman Tarek Nour, said in the statement that they do not wish to be the battleground for an open spat between two personalities “who both played an important role during a tough period.”

“The channel respects the principles of free speech, upholding the freedom of those who work for it, and not wanting to put any restrictions on the content presented, except in cases that would harm national security,” the statement added.

Ali referred to links between Nour and Sawiris, which he speculated could be the reason why the show was suspended. Activists and commentators also mentioned these links as proof of the control of power over media.

There has been speculation that Ali cooperated with state security — which has been accused of wiretapping phone calls and other communications of political dissidents — as part of a systematic smear campaign against the January 25 revolution and its symbols.

Political activists Mostafa Al-Nagar and Abdel Rahman al-Qaradawy both filed a lawsuit against Ali after he leaked a phone call between them. However, Dokki Misdemeanor Court acquitted Ali of all charges in May.