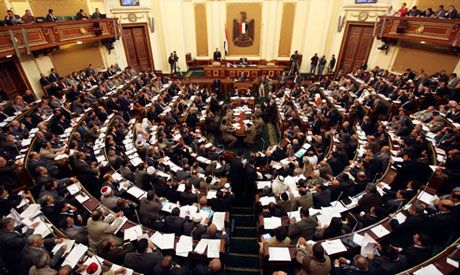 On July 18, the state-owned newspaper Al-Ahram ran a spread from the Ministry of Social Solidarity on the 22nd page, the first widely circulated notice of its kind. The government’s message to civil society groups was clear: adhere to stringent regulation, or face legal action and dissolution.

In the call, the ministry said that nongovernmental bodies have 45 days to legalize their status in accordance with the 2002 civil association law and new legislation regulating civil society work.

The Forum of Independent Human Rights Organizations — a coalition of civic groups — rebuked the call, saying the ministry’s steps represent “a declaration of war by the government on freedom of association and the work of civil society organizations in Egypt.” In a statement issued last month, the coalition called on the ministry to revoke the notice.

Human rights organizations interpret last month’s notice as a warning sign of yet another wave of state attacks on civil society. Past government crackdowns have included smear campaigns against NGO groups and activists, armed raids of NGO offices, the seizure of private information and property, the harassment and arrest of NGO employees and office closure.

“We are forced to work with a sword to our necks,” says Mohamed Zaree, a human rights activist who manages programs at the Cairo Institute for Human Rights Studies (CIHRS).

He says the recent announcement forces civic groups to fend for their right to exist, “distracting us from our aim of defending the voiceless and holding the government accountable for violations of human rights.”

The current Civil Associations Law is known as one of the most arduous laws on civil society in the world, with strict rules on NGO formation, funding and association, giving the government a stacked deck to pursue legal action against NGOs when it seeks to restrict civic activity.

Last month’s announcement came on the heels of the Ministry of Social Solidarity’s unilateral introduction of what Ahmad Ezzat, ​a lawyer with the Association for Freedom of Thought and Expression, calls the “most oppressive legislation regulating civic organizations in the last five decades.”

Civil society groups dismiss the new NGO legislation for violating the rights they snapped up in the 2014 Constitution, which stipulates the formation of NGOs by notification only, and that the government shall not interfere in their activities. The only constitutional prohibitions to form an NGO pertain to secret, military or quasi-military organizations.

The new legislation, however, mandates formation by registration, which renders the organization prey to administrative authority.

Further administrative interference is manifest in the new law’s Coordination Committee, which “effectively gives representatives of the Interior Ministry and the National Security Agency a seat at the table of every NGO board meeting,” according to Zaree.

“The committee reserves broad rights to object to NGO funding, which gives it control over an organization’s activity. It can even refuse to seat members of an organization’s board of directors and object to the resolutions they put forth,” explains Zaree. “This represents flagrant government interference in the internal affairs of independent organizations.”

The legislation also outlaws civic activity under any framework other than the legal one it imposes, though Ezzat argues that “it is not lawful to force a real or nominal person to practice a constitutional right exclusively within a specific legal structure imposed by the state.”

In sum, civil society players object to the move toward the “nationalization of civil society,” and say the bill is reminiscent of the 1964 law passed during former President Gamal Abdel Nasser’s rule, which essentially shut down or coopted independent civic activity.

The CIHRS, together with 23 other civil organizations, formally denounced the bill’s subjugation of all independent associations in Egypt “to unrestrictive prerogatives of the security apparatus.” The bill represents an escalation of repressive steps “by the Ministry of Social Solidarity against civil society in general,” according to the statement.

The statement was issued alongside the submission of a formal memorandum to Prime Minister Ibrahim Mehleb to reject the draft law, and reignite the state’s stalled dialogue with civil society on the basis of the previous associations bill that former Social Solidarity Minister Ahmed al-Borai presented at the United Nations’ Universal Periodic Review.

Under the Mehleb Cabinet, “not a single member of civil society was consulted or asked to contribute to the current draft, despite active involvement and collaboration with the Social Solidarity Ministry over the past three years,” says director of the Cairo Center for Human Rights Research, Bahey Eddin Hassan.

Hassan delivered the petition to the prime minister late last month. This leads him to believe that the “ministry was just a mouthpiece for a draft law that was probably written by members of security bodies.”

After the revolution began in 2011, Zaree says civil society activists “had high hopes” for a new dawn of civic participation. The day following former President Hosni Mubarak’s ouster, an NGO forum was held wherein numerous groups signed onto a roadmap, recommending policies to the government that would “strengthen rule of law and achieve human rights.”

Zaree, who was involved in the reform dialogue on the civil associations law for the past three years, says post-revolution government policies reflect “a clear lack of political will to respect democratic principles or human rights.”

When the new Mehleb government was sworn in this summer after Sisi assumed the presidency, newly appointed Minister of Social Solidarity Ghada Wali undertook the legislation as one of her first projects.

The Ministry of Social Solidarity did not respond to Mada Masr’s request for comment.

Critics see the law as the next step of repression in a wide crackdown against both Islamic and secular political opposition to the current regime that has been in force since Morsi’s ouster in July 2013. Civic leaders fear that the law will legitimize state repression in the civic sector in the same way the protest law has been used to broadly silence government opposition across the political spectrum.

There are also concerns that the legislation targets human rights organizations in particular, which may be a tool for the state to control Egypt’s image abroad, Ezzat argues.

With Egypt facing international criticism for human rights violations, the lawyer warns that the direction may be to tame local voices that scrutinize and reveal state practices to the world.

“This law may very well be the final link in the chain that shackles independent Egyptian opposition,” says Gamal Eid, the director of the Arab Network for Human Rights Information.

“The government first pressured the media, then the judiciary. Once they were on board with the state crackdown against the Muslim Brotherhood, they moved to silence revolutionary youths by smearing them in the media and arresting those still speaking out under the Protest Law,” he says.

“Human rights NGOs are the last line of defense for victims of repression, and now the government wants us gone,” Eid cautions. “The state wants to silence us as a way getting revenge for the role we played in the revolution.”

AD
You Might Have Missed
Carbon Colonies & A Green New Deal
If they steal Sheikh Jarrah
Where do old lesbians go to die?
Mugamma revisited: Reimagining the building and the square
AD
Al-Sharif Nassef
3 articles on Mada