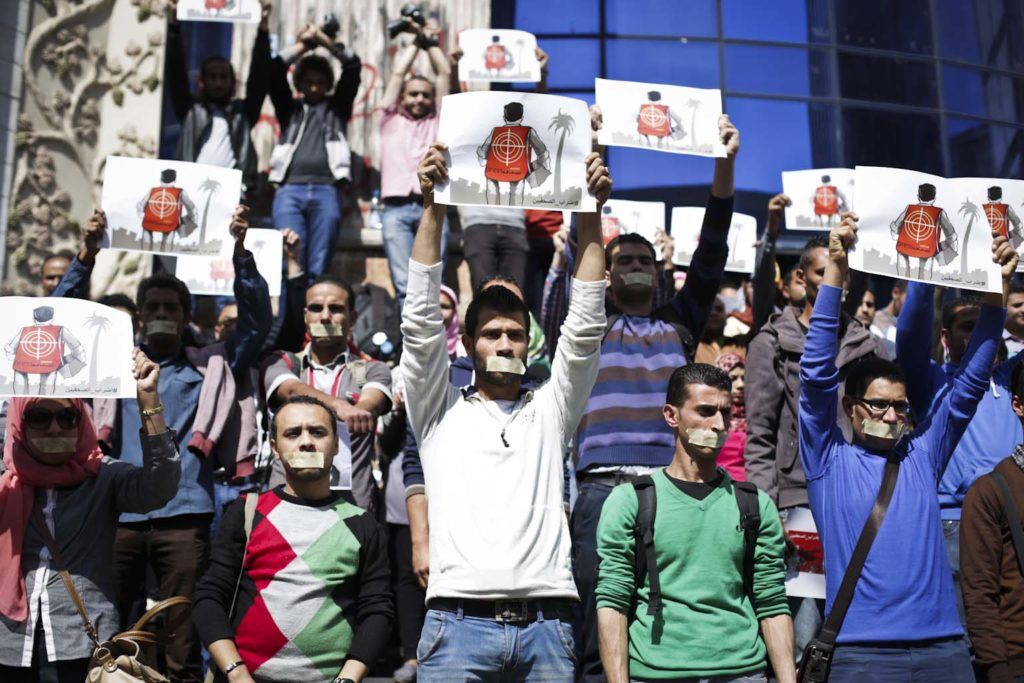 Journalists Against Torture (JAT), a non-profit organization dedicated to documenting violations against journalists in Egypt, issued a statement on Tuesday criticizing lack of freedom of expression and the treatment of journalists, ahead of the first anniversary of the Rabea and Nahda Square sit-in dispersals.

A recent report by Human Rights Watch highlighted assaults on protesters by police and military forces from the ouster of President Mohamed Morsi on July 3, 2013, until the dispersal of the pro-Brotherhood sit-ins on August 14, estimating over 1,117 deaths.

JAT criticized the failure of the authorities to officially charge individuals or government bodies with the murder of three journalists among the hundreds of victims of the dispersals. Sky News cameraman Mick Deane, Al-Akhbar reporter Ahmed Abdel Gawad, and Rasd News photojournalist Mosaab al-Shamy were shot dead amid the violence. Emirati Gulf News reporter Habiba Ahmed was also killed, however, the group added that she is believed to have been a participant of the sit-ins, rather than purely there for purposes of news coverage.

A report released last April by the National Council for Human Rights’ fact-finding committee failed to mention any additional information about the deaths of these journalists. It merely said that a number of journalists were arrested while covering the dispersal, most of whom were released following varying periods of  “unlawful detention without charge.”

Al Jazeera reporter Abdullah al-Shamy was mentioned as an example of a journalist who remained in detention for over 300 days without charge, only to be released upon a direct order from the general prosecutor. Independent photojournalist Mahmoud Abou Zeid, also known as Shawkan, continues to be arbitrarily detained.

In a recent interview with Mada Masr, Shawkan’s brother said, “My brother never held a gun, he was simply doing his job, but unfortunately he was a freelancer, so he had no institution to back him or offer any support.”

JAT believes there to be a lack of transparency and accountability in these crimes. “The door was wide open for violations against journalists of all kinds… from murder to physical and psychological abuse, detention, threats and bans, to the point where journalists were convicted in courts for their work, which represents the severe violation of international treaties and documents signed by Egypt, especially article 19 of the Universal Declaration of Human Rights.”

The statement continued, “It is also considered a violation of the constitution itself, which was approved by the vast majority of Egyptians in January, making the last year the worst in many decades when it comes to freedom of expression and journalism.”

The group demanded the immediate release of detained journalists on charges related to work that mandates a field presence, as well as suitable compensation for the period of their detention.

They also emphasized the importance of forming an independent committee in collaboration with the Journalists Syndicate and other NGOs that is granted full authority to collect information, ensuring a transparent and impartial investigation into the killing of journalists in recent months.

“The committee should be granted the right to suggest any legislative amendments necessary to guarantee that no one escapes justice when it comes to violating freedom of expression and ensure that similar violations are not repeated in the future,” the statement added.

JAT also demanded that the syndicate presents clear and precise mechanisms to protect and ensure the safety of journalists while they perform their field duties.