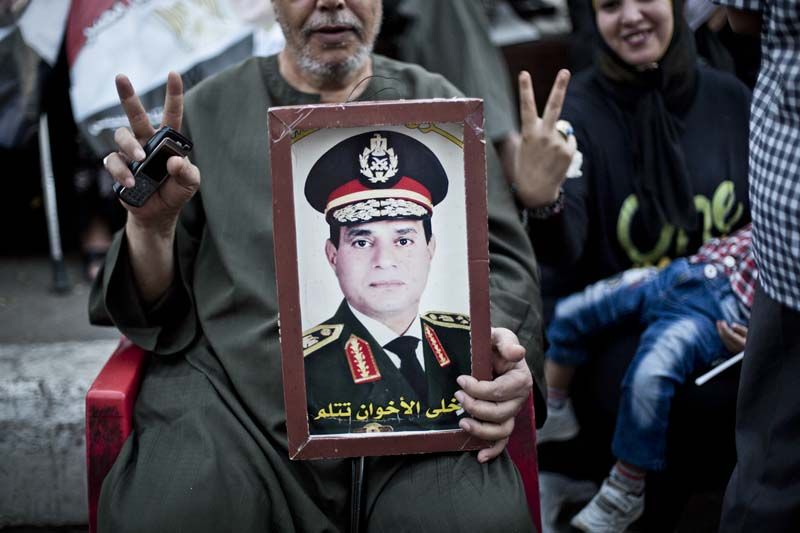 President Abdel Fattah al-Sisi is scheduled to return to Cairo Monday after a one-day visit to Saudi Arabia, where he met with King Abdullah bin Abdul Aziz, state media reported.

On his first official visit to the kingdom, Sisi discussed the situation in Gaza with Abdul Aziz, namely Egypt’s efforts to reach a cease-fire and end the bloodshed, state-owned MENA reported.

According to the Saudi Press Agency, both leaders discussed an initiative by Abdul Aziz to establish a “center for counter-terrorism,” but gave no further details on the matter.

Saudi Arabia has been a staunch supporter of the post-Muslim Brotherhood government. Following the ouster of Morsi, King Abdul Aziz said that the kingdom stands “in support of Egypt and its people against terrorism.”

He appealed to leaders the Arab and Muslim world to stand united against those destabilizing Egypt, and said it is the country’s legitimate right to combat any threats.

During Sunday’s meeting in Jeddah, the Saudi King awarded Sisi with the King Abdul Aziz Medal, in honor of him and the Egyptian people.

Saudi Prince of Foreign Affairs Prince Saud al-Faisal was quoted by the Saudi Press Agency as saying that the meeting between both leaders was necessary under the current conditions of the Arab and Islamic nation, as well as “foreign wars, the intervention of foreign powers, inside seditions, and differences between the Arab nations.”

“As long as the two leaderships meet, there is hope that their meeting and consultations are useful in reforming the situation in the Arab world to be able to fulfill its duty towards their oppressed brothers in Palestine, the afflicted people in Syria, this sedition in Iraq now, differences in Libya. All the Arab world requires action to reform the situation,” he added.

Following his meetings with the Saudi King, Sisi headed to Mecca where he performed Umra before heading back to Egypt.