Atelier Alexandria: The persistence of the state 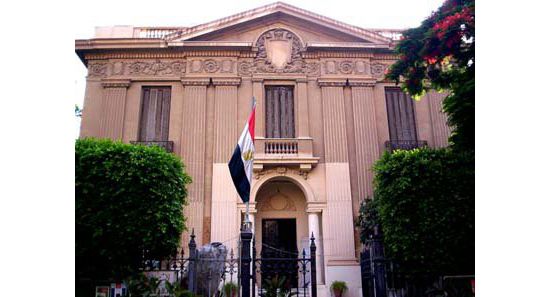 It is located near Batalsah Street, not far from Khartoum Square, a few hundred yards from the Faculty of Medicine in Alexandria.

Batelsah, an archaic Arabic word for the Ptolemiacs, refers to the fact that this area, the Azarita district, was the site of Cleopatra VII’s palace, the Temple of Poseidon, and Mark Anthony’s monument to his own defeat, the Timonium.

Atelier Alexandria near Batalsah Street was established in 1934 as one of the earliest attempts by Egyptian artists to organize and create a space to show their work and, in a way, unionize. It shares a troubled history with the neighborhood it’s affiliated with and it also serves as a perfectly preserved specimen that can exemplify the complex relationship the state has to the arts.

In addition to its resonance with ancient historical narratives, the neighborhood also has a modernist twist. It was the site of one of the early attempts by Mohamed Ali to build a maritime quarantine station, and the name Azarita bears a connection to this: it is believed to be a corruption of the Italian word “lazaretto,” which derives from “lazar,” meaning people with infectious diseases. 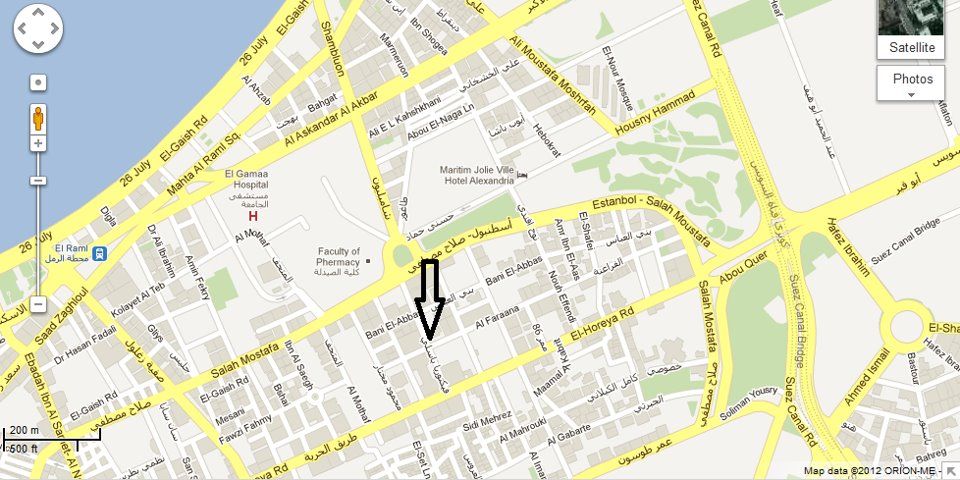 The neighborhood transformed into an informal Greek district in the early 19th century, with the establishment of a Greek school, a Greek orphanage and even the Greek Club on Fouad Street. The Greek renaissance in Egypt peaked with philanthropist George Averoff (1815-1899), who single-handedly funded the construction of many Greek establishments in Egypt and Greece, as well as poets like Constantine P. Cavafy (1863-1933), who was starting to receive literary recognition by the time he died.

It was around the same time that Egyptian artist Mohamed Nagy (1888-1956) established the atelier as a place to show his work and to hold lectures and events. Unsurprisingly, the majority of those involved, whether working in its administration or actually participating as artists, were foreigners: Italians, Greeks, French, or even mix of each. By the time its third director was in office in the late 1950s (another Alexandrian artist, Seif Wanly), the atelier contained a much more Egyptian presence.

But it was also around that time that Gamal Abdel Nasser officially assumed power as president and, after the 1956 Tripartite Aggression, started enacting his nationalization policies — particularly after the dissolution of the United Arab Republic in 1961. Although it remains disputed how much of the Greek community left Egypt during Nasser’s time (a 2009 study by Alexander Kazamias provides interesting insights on these numbers), it is certain that whatever influence foreigners wielded during Egypt’s era of cosmopolitanism slowly eroded as Egyptians took over.

The gradual nationalization — or one could say “Sovietization” — of culture started with the establishment the Higher Council of Arts, Letters and Social Sciences in 1956 and culminated with Mohamed Hassanein Heikel’s famous 1961 book “Azmat al-Mothaqafeen” (The Crisis of the Intellectuals). It accused intellectuals of being elitists who would no longer have a choice but to participate in the revolution. Heikal was then heading state flagship daily Al-Ahram, and Nasser nationalized the press that year, effectively securing state control over what was published.

All this foretold the kind of relationship the state now has with centers of culture production and dissemination, and how it would co-opt the entire cultural infrastructure that had thrived during the early twentieth century under the more ambivalent — and sometimes benevolent — monarchy.

The atelier itself changed its headquarters close to six times, according to some (since there is no official narrative of the history of the atelier, exact dates and locations are conjectural). It started in a rented place on Safiya Zaghloul Street and moved around a few times until finally moving to its current villa in 1956 or 1969, depending on the source. The villa belonged to a Greek merchant who sold it to Egyptian timber tycoon Al-Sayyid Karam, who in turn replaced most of the interiors with wood paneling, giving it its distinct interior. After Karam, the villa’s ownership went to the Egyptian Italian Bank, which leased it to the atelier’s administration.

Conflict in dating only serves to show how little is really documented, both in terms of factual data (year of establishment, who ran it, and so on) and more elaborate information, for example on what kinds of exhibitions or artists the atelier has supported since it was established. The problem of missing information is not just a failure in documentation, but in institutional transparency and accountability. The fact that we have so little basic information as to who administered the atelier and how they choose to employ its apparently large allocation of state resources (real figures on the budget are impossible to obtain) makes clear the kind of bureaucratic quagmire the atelier has been mired in for decades.

The shift that took place during the late 1950s and 1960s subjected all the arts in Egypt not only to bureaucratic control but also to an ideological scrutiny akin to Soviet subordination. This limited any kind of change or reform to mere window dressing.

The Atelier Alexandria seems to still maintain strong ties to the Faculty of Fine Arts as well as to the community in general. They hold workshops for children and adults in many traditional art forms (painting, sculpture, design, and so on) and put out calls for international residency artists and exhibitions. The Cairo Atelier, in contrast, does not seem to have such a strong audience or influence, and I am not aware of any exchange between it and other institutions, Egyptian or international. 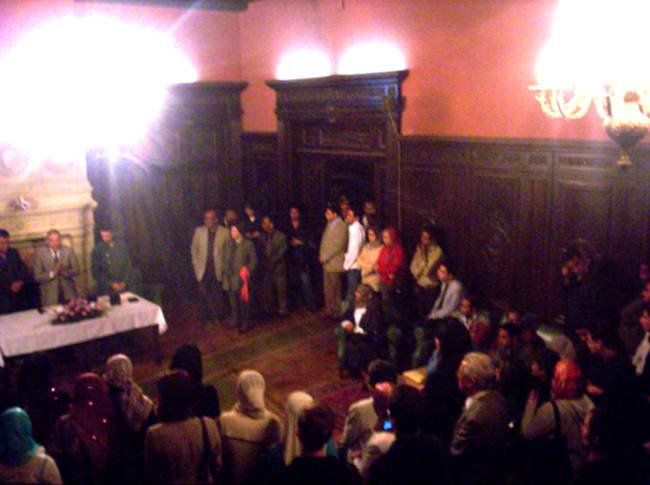 But even in its recent attempts at presenting itself differently — creating a webpage, a Facebook page, and a Twitter account (last used on May 25) — the Atelier Alexandria remains within the confines of the bureaucratic and ideological setup of the Nasser regime and its policies.

A concrete example is a series of workshops held alongside the Alexandria Biennial this year, part of the atelier’s international outreach focusing on multimedia practices across the Mediterranean, in cooperation with several Mediterranean institutions. It was attended mainly by students from the Faculty of Fine Arts in Alexandria, but sometimes also by members of the atelier and even some professors.

Throughout the many sessions and events over the five days, most comments from atelier members and more senior artists were primarily concerned with claims about how reactionary and irrelevant contemporary artistic practices are to the Egyptian context and how they are a Western ploy to undermine the moral integrity of art and culture in Egypt. Their language was couched in ideological jargon, and they repeatedly asked why Egyptian artists must “borrow” from or “look up to” the West. Some suggested young artists should be content to only look around them and be inspired from their immediate environment and the history and traditions of their own country.

In the Q&A sessions held with visiting artists or the Egyptian artists working with them — all multimedia and digital artists — many of the questions centered around undermining such cultural exchanges and demonizing them, by asking about sources of funding, reasons behind such exchanges, or even the usefulness of teaching students digital techniques. It seemed that the mentality of looking out for “the informant” still persists for many working at the atelier and those affiliated more generally with the cultural sector in Alexandria.

Thus the Atelier Alexandria, despite its recent more contemporary posturing, is still by and large a well-preserved specimen of the policies and ideologies of post-colonial Egypt and the many ways in which the state, even with its failing capacities, still maintains a strong hold over the cultural and artistic infrastructure.

But the head of the atelier — a former head of surgery at Alexandria’s Faculty of Medicine and occasional poet — is pushing 70, while students attending some of the workshops were aged 19. It seems that a serious generational gap may be threatening this well-preserved ecosystem that has sustained itself for the past 50 years.

AD
You Might Have Missed
What we talk about when we talk about trees
Mugamma revisited: Reimagining the building and the square
Carbon Colonies & A Green New Deal
Where do old lesbians go to die?
AD
Sohier Amin
1 article on Mada

Topics
Related
American University in Cairo
Toward an art that hides nothing behind
Adham Selim | Ganzeer’s metaphor imagines the world as a spectacle, something that you can choose either to gaze
Al-Ahram
Mostafa Hussein and mentioning the sins of the deceased
Andeel | Mentioning the good deeds of a deceased Mostafa Hussein, Abdallah Kamal or even Salah Jahin is a contribution
Cairo
Cultural enlightenment for Cairo’s downtown futures
Marie-Jeanne Berger | Ismaelia is a consortium of Egyptian and Saudi investors: Egyptian billionaire Samih Sawiris (with a
architecture
What will things look like after revolution and return?
Jenifer Evans | Jenifer Evans on a fascinating discussion at London's Tate Modern about Decolonizing Architecture Art