What will things look like after revolution and return?

Palestinian Legislative Council building - Courtesy: All photos from the DAAR website. This photo by Livia Minoja.
By
Jenifer Evans

“There was no imagination for the future of Tahrir after revolution,” said Sandi Hilal at London’s Tate Modern last week.

She was arguing for not postponing crucial issues — like women’s rights and what to do with the buildings of your enemy — until after battles are won and it’s too late.

Hilal’s work is based around imagining the day after the UN gives the right of return to Palestinians. What will happen to 5 million exiled people and to 65 years of exile? How can the life of exile be part of return?

Due to Palestinians’ history and the specific nature of refugee camps, this visualization involves asking what the difference is between the “public” and the “common,” and whether that difference points a way toward a collectivity beyond the state and beyond citizenship.

Alessandro Petti, part of the Decolonizing Architecture Art Residency (DAAR), of which Hilal is also a member, explained that “public” is associated with colonialism in the Arab world. Colonial authorities claimed the things and land that people shared in common, and postcolonial regimes have continued this pattern, which is why reclaimed, unplanned common spaces — like Tahrir during the 18 days — are so important. Cleaning the square, for example, was no longer about cleaning the house of your enemy. In Palestine, there were various forms of communal land under Ottoman rule, but the British thought them inefficient, and 1948 flattened these various lands into public, or state, land.

In Palestinian camps, architecture has played an important role in opposing normalization, in not blending with the outside, the hosting country. Using the example of the (now very built up) Dheisheh camp in the West Bank, Petti described how every architectural element is a political project. Building a roof or linking to a water pipe — any step toward adaptation to exile — can mean you’re accused of relinquishing or compromising your right of return. 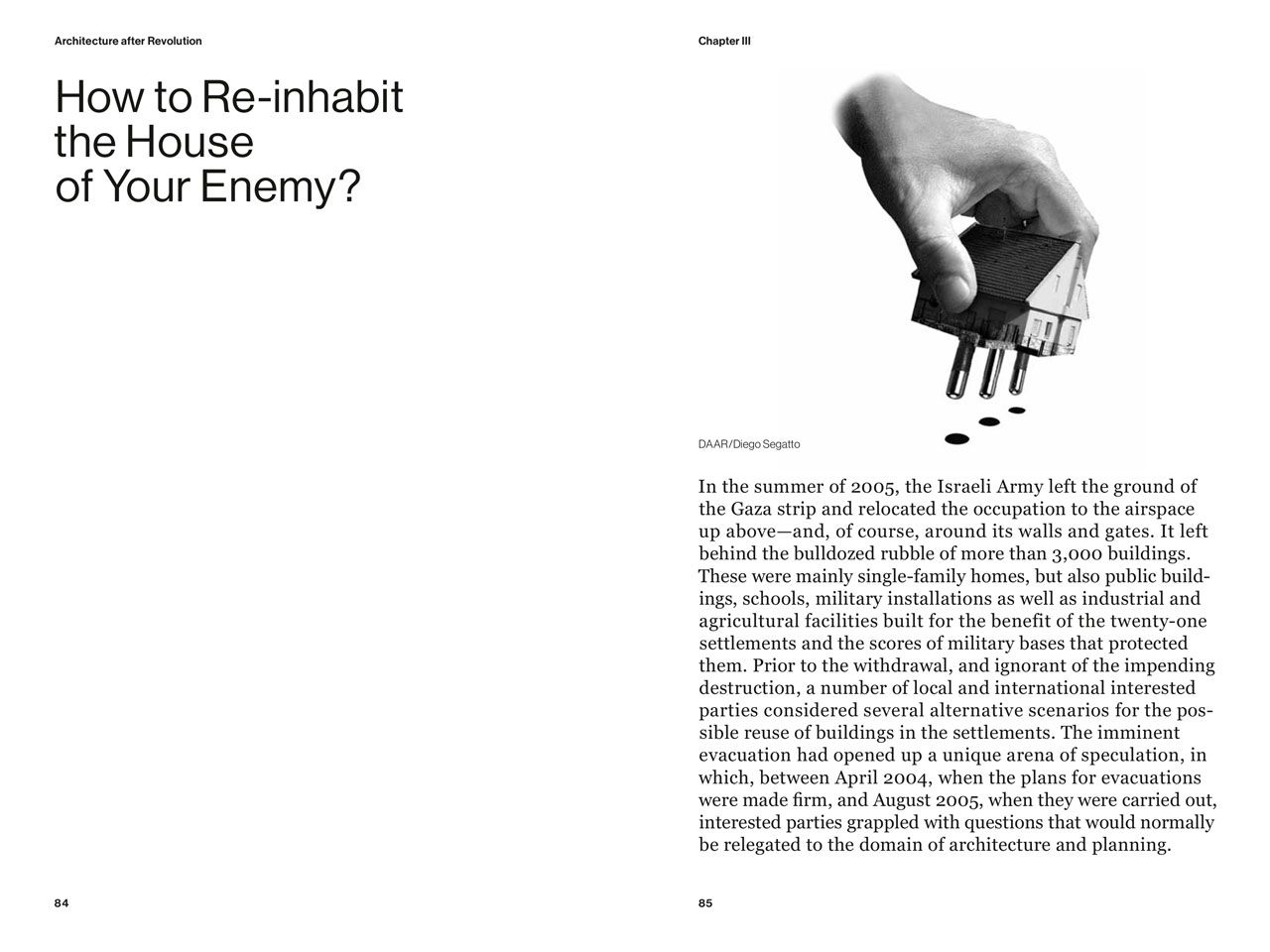 The people say they will destroy everything they built for the right to return home. Hilal, instead, suggested that something else might be necessary: rather than displace masses of people again — and “create another Nakba,” as she put it  — create built collectivities to return to, in the form of common spaces.

As such, through DAAR, Hilal, Petti and third member Eyal Weizman focus on speculation (leaps of imagination that are not happening elsewhere) and on examining terms (and, if necessary, coming up with new ones), to also deal with existing things. In doing so, they demystify what is happening and the language used to describe what is happening, while opening up practical options for the future.

DAAR is a collective and residency program based in Beit Sahour, Palestine, that has existed since 2007. Having recently published their first book, Architecture after Revolution, the three members gave a talk co-organized by Delfina Foundation at Tate Modern, in conversation with historian and socialist activist Ilan Pappé, writer and curator Okwui Enwezor, and various members of an audience that seemed, from the conversation at the end, very knowledgeable about the topics discussed.

Hilal insisted that it is possible to come together to write your story rather than believing colonized narratives, such as how the right of return has been narrated since the 1970s — erasing the life of exile. It is possible to speak of “decolonization” rather than a “solution,” and of “returns” rather than “return.” Although in the camps there is a blurring of public and private, she said, campaigners for the Palestinian right of return often use the symbol of the key — a symbol she described as neoliberal, in that its existence depends on private property — thus buying into the narrow narrative of their oppressors. But how can 60 families return to one family home, even if it is still there?

“The right of return must be narrated in a more complete way,” she said. “The return of 5 million people is not my story.” As a Palestinian, she has no access to the Mediterranean: Return is about freedom of movement.

“To negotiate architecture with people is to negotiate their story,” said Hilal.

She has designed and built a square in the Fawwar refugee camp, near Hebron in the West Bank, in collaboration with the people living there, arguing against the idea that a collectivity should not be built if people are to return home as individuals. And working with the UNWRA, she designed and built a school in East Jerusalem’s Shuafat camp which — at the risk of appearing too normalized or permanent — was not a “copying and pasting” of typical refugee-camp buildings, but instead considered what form could work best for that particular site, taking into account, for example, the direction from which the sun shone.

Hilal reiterated that she is against postponement and for considering and visualizing forms — whether it be a school or a square in a camp, a line drawn by pen on a map, or a key symbol — as mattering in the Palestinians’ struggle.

Adding to the context, Enwezor discussed the privileging of provisionality and suggested that provisional civil structures are necessary in much of the Middle East because public space is under consistent threat of theft by the state.

Bringing in other elements of DAAR’s work, which involves spatial interventions, collective learning, public meetings and legal challenges in order to subvert and re-use the occupation’s infrastructure and open an “arena of speculation,” Weizman spoke about the (now abandoned) Palestinian Legislative Council building. Through “an act of cartographic subversion,” when it was built in 1996 it managed to get a third of itself across the Israeli-imposed border into occupied Jerusalem despite the fact that negotiations had only managed to get it to the border’s outside edge. 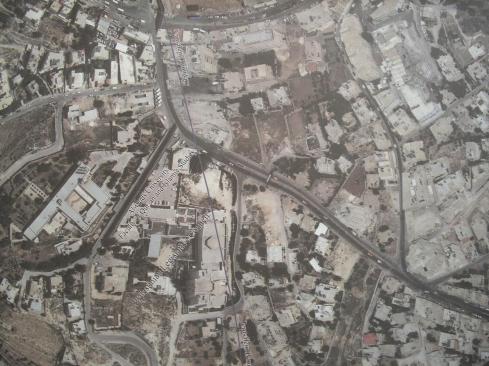 He also spoke about the Green Line. In 1949, two lines, green and red, were physically drawn in ink on a map laid out on a military jeep’s hood by two military leaders, Moshe Dayan of Israel’s Jerusalem Front and Abdallah al-Tal of the Transjordanian Arab Legion. The pen line thickens up to 3mm at points, which is several meters wide in reality. DAAR’s work to “find and utilize cracks and loopholes within existing colonial systems of separation and control” proposes that inside the line’s thicknesses on the ground, “extraterritorality” and exile are united.

Pappé’s contribution centered around the idea that the Palestinian national struggle needs to be reframed as a struggle for civil and human rights (arguably this is something that the Boycott, Divestment and Sanctions movement is helping to do). One example he gave to support his argument was how no one is discussing the fact that Israel has not taken in a single refugee from Syria, despite its being the richest country in the area.

“Zionism has no answers to a movement based on human and civil rights,” he said.

The suggestion of human rights rang alarm bells for some of those present. It has been argued that human rights have been used to scaffold the occupation, partly because, as Hannah Arendt pointed out a long time ago, they have unintended consequences when delinked from the state — and the Palestinians are stateless.

“For 20 years, we were bashing human rights as an arm of imperialism,” said Weizman, but now we are embracing “right” of return and “human rights.” Between the 1970s and 1990s, human rights were understood as individual rights without political context — purely about the misery of the rightless — and this is being rethought, he said: We need to find in them things that we can use, as part of re-thinking political subjectivity from the vantage point of the extraterritorial refugee.

What seemed to be a consensus was that the Palestinian struggle has the potential to lead and teach in terms of such rethinkings, because Palestinian refugee camps have become a place where you have the collective beyond the state.

“DAAR is giving a name for something substantial that is already happening,” said Enwezor.

“The book is part of a struggle to triumph out of defeat,” said Pappé of DAAR’s Architecture After Revolution.

“And to live long enough!” shouted out a small white-haired woman, the founder of Delfina herself, from the audience.

AD
You Might Have Missed
What we talk about when we talk about trees
Mugamma revisited: Reimagining the building and the square
Carbon Colonies & A Green New Deal
Where do old lesbians go to die?
AD
Jenifer Evans  @jniferrl
40 articles on Mada

Topics
Related
Cyprus
Lotus Notes: Part Two B
Nida Ghouse | “There is no god but God!” gave way to more passionate and perverse political refrains: “No more
cartoon
Cartoon Cartoon: Looping
Andeel | #What’swrongwiththisphrase? Guy 1: “All Jews are racist because they all say all Arabs are
cinema
Egypt’s cinematic gems: ‘Land of Hypocrisy’
Amany Ali Shawky | Fateen Abdel Wahab’s comedic approach does not strip Youssef El Sebai’s novel from its crafty denunciation.
cinema
Border-crossing on the bride’s side
Laura Cugusi | On a film about a celebratory act of civil disobedience.