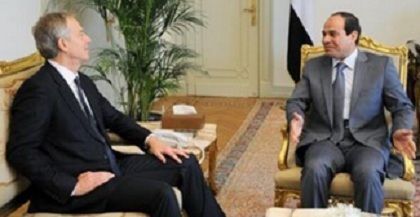 Presidential spokesperson Ehab Badawy said that President Abdel Fattah al-Sisi expressed concern over the “intransigence and stubbornness” in mediation efforts to reach a ceasefire between Israel and Hamas.

Sisi made the remarks amid a meeting with Mideast Quartet envoy Tony Blair to discuss Egypt’s efforts to end Israel’s offensive on the Gaza Strip, leaving 127 Palestinians dead, according to the latest toll released by the Palestinian Ministry of Health.

Sisi warned of the dangers of military escalation and its impact on innocent civilians.

Badawy added that Sisi declared Egypt’s full support for Palestinians and the government’s commitment to provide Gazans with the humanitarian aid necessary to survive the attacks through the opening of the Rafah crossing to receive the injured. The president referenced the Egyptian military’s sending of 500 tons of aid to Gaza.

Egypt’s Ministry of Health said in a statement Saturday that four more injured Palestinians were transferred to Al-Arish Hospital through Rafah.

A previous statement by the Ministry of Foreign Affairs expressed Egypt’s mounting concern over the escalation in Gaza, calling on both Israel and the Islamic Resistance Group Hamas to end “mutual violence” that affects innocent civilians.

The statement reiterated Egypt’s calls to end “violence and counter violence” in a way that makes negotiations between the two sides more difficult to reach.