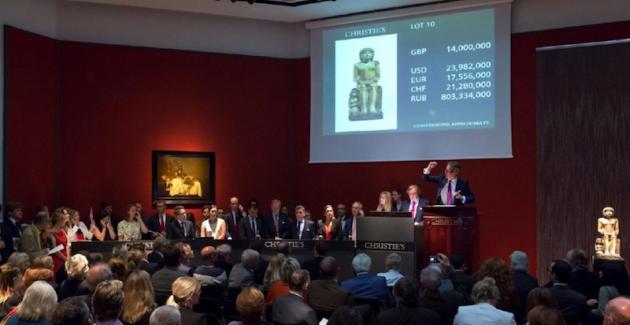 On Thursday, a 4,300-year-old statue of an Ancient Egyptian scribe was auctioned off in London for GBP15.8 million. The auction has distressed Egyptian antiquities authorities, who face an uphill struggle in having the statue of scribe Sekhemka returned.

On Friday, Ali al-Asfar, chief of the Antiquity Ministry’s artifacts department, announced that the auction has made it “nearly impossible” to retrieve the 75 cm tall limestone statue of Sekhemka, which dates back to around 2,300 BCE.

But nonetheless, Asfar told the privately owned newspaper Al-Masry Al-Youm (AMAY) that legal and diplomatic efforts are ongoing in hopes of returning Sekhemka. The Egyptian Embassy in London will continue to struggle to retrieve this priceless artifact, he said.

Christie’s auction house organized Thursday’s sale, which saw the statue fetch more than twice its estimated selling price of GBP6 million, or about US$10 million.

This auction was held at the Northampton Museum and Art Gallery, nearly 100 km northwest of London, where Sekhemka had been on display since the mid-1800s.

According to Asfar, the statue of Sekhemka was handed over as an official gift to a member of the Northampton family in 1849. This statue was reportedly donated to the museum in 1880.

Christie’s had been unwilling to halt its auction of Sekhemka, and even more unwilling to hand over the statue over to Egyptian authorities, saying the artifact was not stolen from Egypt.

The auction house cited the UN’s Convention on the Means of Prohibiting and Preventing the Illicit Import, Export and Transfer of Ownership of Cultural Property of 1970, claiming that this statue was acquired from Egypt prior to the existence of this convention.

Christie’s also pointed out that, following its sale, Sekhemka is now formally in private hands.

In an interview with the UK-based newspaper The Independent, renowned novelist Alan Moore described the sale of Sekhemka as “catastrophic,” adding that it brought “shame” upon Northampton and its museum.

The statue’s sale was intended to raise funds for the extension and expansion of the Northamptom Museum.

Though it failed to retrieve Sekhemka, on Wednesday the Antiquities Ministry did succeed in retrieving nine Islamic and Pharaonic artifacts from Denmark and France which had been stolen and illegally smuggled from Egypt.