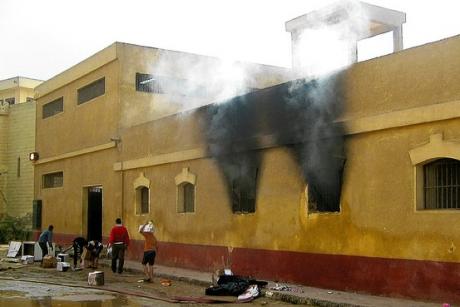 The Interior Ministry issued a statement on Wednesday denying reports of torture in prisons made by human rights organizations and prisoners’ families.

The statement offers a delayed response to specific reports of a violent assault on inmates in Wadi al-Natrun prison on May 31.

On Tuesday, new testimony by a student detained in Wadi al-Natrun was published, revealing further mistreatment.

Human rights groups reported that Central Security Forces raided the cells of the prison and attacked prisoners with batons, firing tear gas into the cells. The attack was seen as an attempt to curb a wave of protests after Muslim Brotherhood sources announced that 20,000 prisoners had started a hunger strike the day before.

However, the Ministry of Interior denied any wrongdoing on its part, stating that security forces were performing a routine check on cells when inmates started banging on cell doors and throwing empty bottles at them. The statement says that the situation was dealt with no violations incurred on the part of security forces.

The statement also added that 17 mobile phones were confiscated during the raid, which revealed evidence of contact with a satellite station, and which were used to propagated false news about the state of prisons.

The ministry ended with a plea to human rights organizations to “prioritize national interest” and check the accuracy of reports, which it says contradict with the ministry’s commitment to all legal and constitutional conditions of their work.

On Tuesday, the Freedom for the Brave campaign published the testimony of Abdel Rahman Fouad, a Cairo University student who was arrested from campus on January 16 and is currently being detained in Wadi al-Natrun.

Fouad recounted that inmates have been forced to sing songs that praise the military as a form of humiliation, and were assaulted if they refused. He also said that the personal belongings of inmates have been confiscated and that detainees were placed in overcrowded cells.

Fouad says that prisoners are only allowed out of their cells for half an hour a day and that personal searches are conducted violently, escalating to sexual harassment and assault at times.

He added that any attempts to begin hunger strikes are met with violent assaults, with inmates placed in solitary confinement.

Amnesty International issued a statement last Thursday decrying the increase in arbitrary arrests and torture in the year following former Islamist President Mohamed Morsi’s removal. The human rights watchdog stated that it had documented, using hard evidence, the systematic torture that has been taking place in prisons, especially that which targets Muslim Brotherhood members and supporters.

Topics
Related
prison conditions
Committee to investigate reports of human rights abuses in women’s prisons
A governmental committee plans to look into allegations of human rights violations committed against
Abdel Fattah Othman
Interior Ministry: Prisons have become like hotels
Responding to reports of torture and rape in prisons, the Deputy Minister of Interior for Media,
Abdullah al-Shamy
After visit to Tora prison, prosecution says no evidence inmates are mistreated
Following a surprise visit to the Tora prison complex, a team from the prosecutor’s office claimed
Abdullah al-Shamy
Rights group slams Egyptian prison healthcare system
The health system in Egypt’s prisons is inadequate and does not meet basic requirements as set out