Despite austerity, spending in new budget is close to last year’s

After weeks of budget-related drama, Egypt’s Ministry of Finance has finally released details of its budget for the 2014/2015 fiscal year, which began on July 1.

After President Abdel Fattah al-Sisi rejected a previous draft and tasked the Cabinet with lowering the deficit to 10 percent, the eleventh-hour passage of an amended budget gave little detail of its provisions but was immediately followed by a slew of tax and subsidy reforms.

Despite strong words from Sisi about the need for austerity measures and the upheaval caused by a sudden increase in fuel prices, a preliminary review of the 2014/15 budget reveals few major differences between the new budget and government spending in the year that just ended.

Compare, for example, these two charts, based on allocations for the 2014/15 budget, and the Ministry of Finance’s estimates for expenditure in the 2013/14 fiscal year. 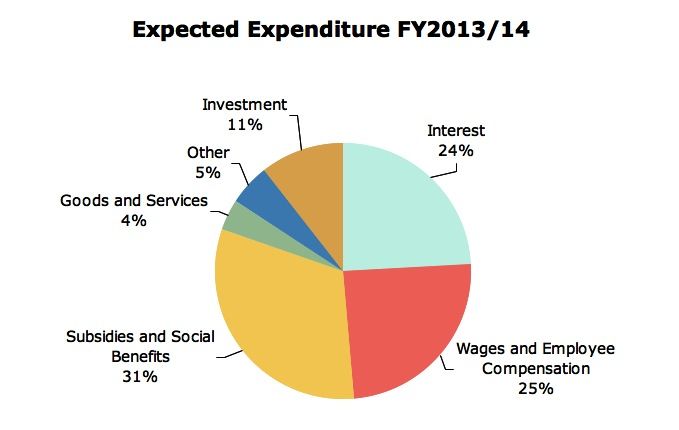 There is little variation in the proportion of funds dedicated to each major category of expenditure. However, the 2014/15 budget calls for LE789 billion in expenditure, compared to an estimated outlay of LE737 billion in the last fiscal year. Revenue is expected to grow as well, reaching LE549 billion, compared to LE507 billion last year.

This ratio leads to an overall deficit of LE239.9 billion, or 10 percent of Egypt’s GDP — a figure Sisi demanded when he sent the original draft budget back to be amended. The finance ministry estimates that the 2013/14 deficit was around 12 percent of GDP, although that figure would have been closer to 15.8 percent of GDP without one-time factors like the influx of financial aid from the GCC, which was estimated at over $16 billion (the figure given in the budget is LE117.2 billion). 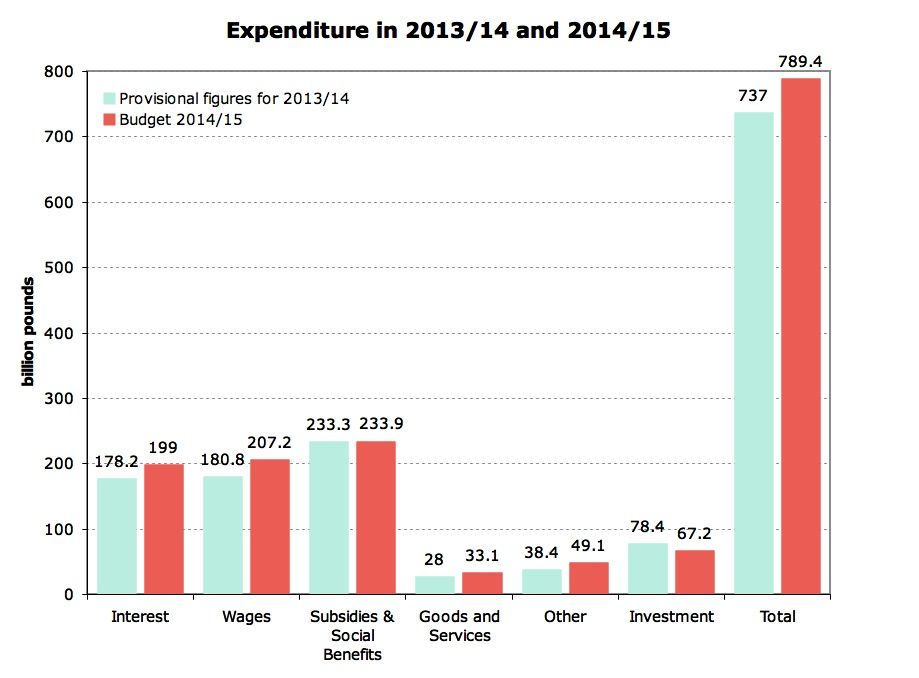 The 2014/15 budget calls for increased spending in nearly all categories, except for “investment,” which encompasses spending on non-financial assets like buildings, equipment and land. Wages are set to increase, largely thanks to a minimum wage law that came into effect in January, as well as increases in salaries for teachers and medical professionals. The increase in interest payments is in line with the administration’s stated goal of decreasing Egypt’s debt.

The single largest item in the budget is for subsidies and social benefits. Despite newly introduced austerity policies, the allocation for these items has actually increased slightly, although they remain below the LE253 billion called for in the draft budget Sisi rejected.

The budget statement also includes some comparative figures that indicate how funds will be shifted around. Note that the figures listed below for 2013/14 are based on that year’s budget, not estimates for actual spending. There is a difference of almost 10 percent between the LE212.37 billion in the 2013/14 budget and the LE233.3 billion the government estimates was actually spent — a reminder that Egypt’s budgets often contain a good deal of wishful thinking. 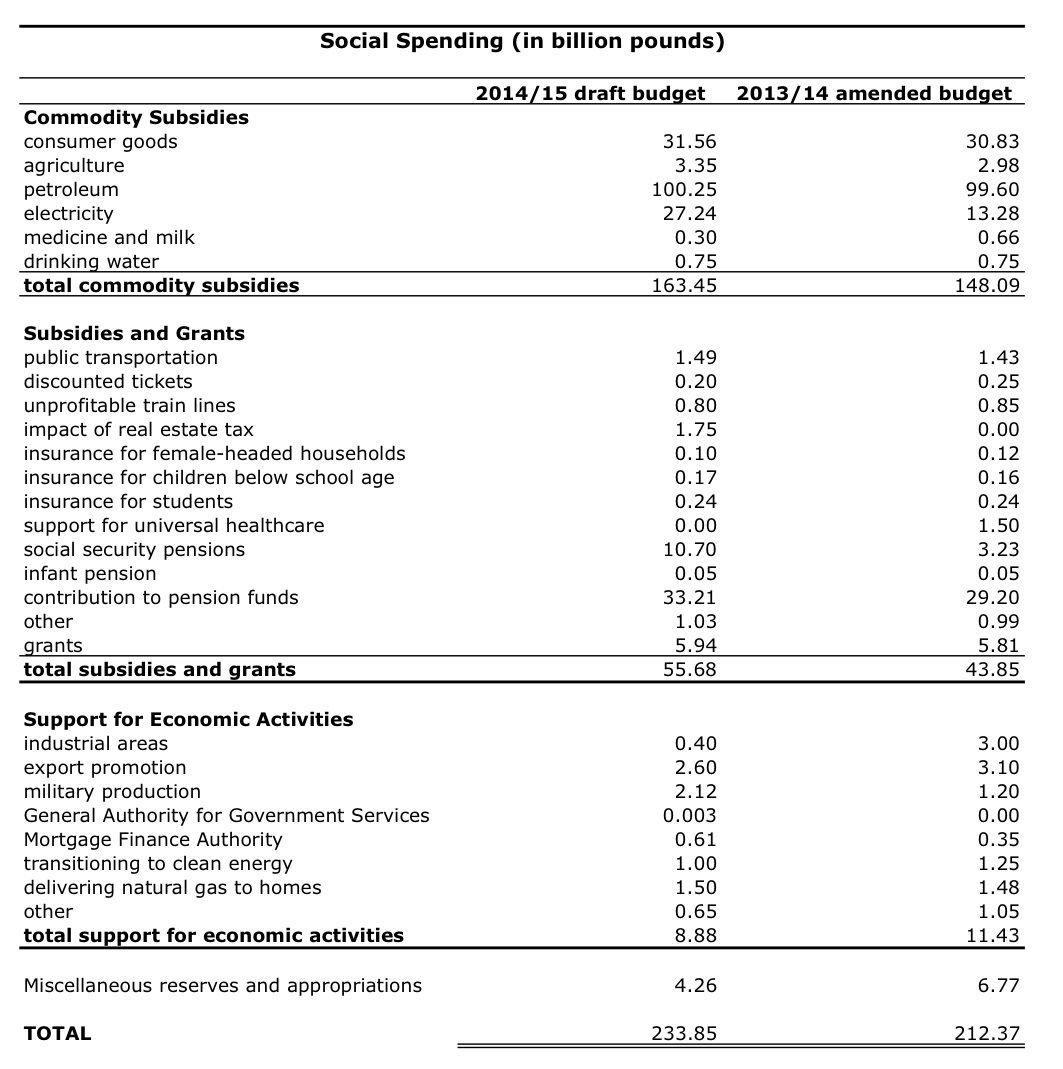 The budget for energy subsidies is almost 13 percent higher in the new budget than in last year’s. However, according to the finance ministry, Egypt actually spent around LE145 billion on petroleum subsidies in 2013/14, rather than the LE99.60 billion listed above. Sisi’s aggressive moves to reduce subsidies indicate that the current administration will be more serious about sticking to the budget than the interim government that led Egypt throughout the 2013/14 fiscal year. 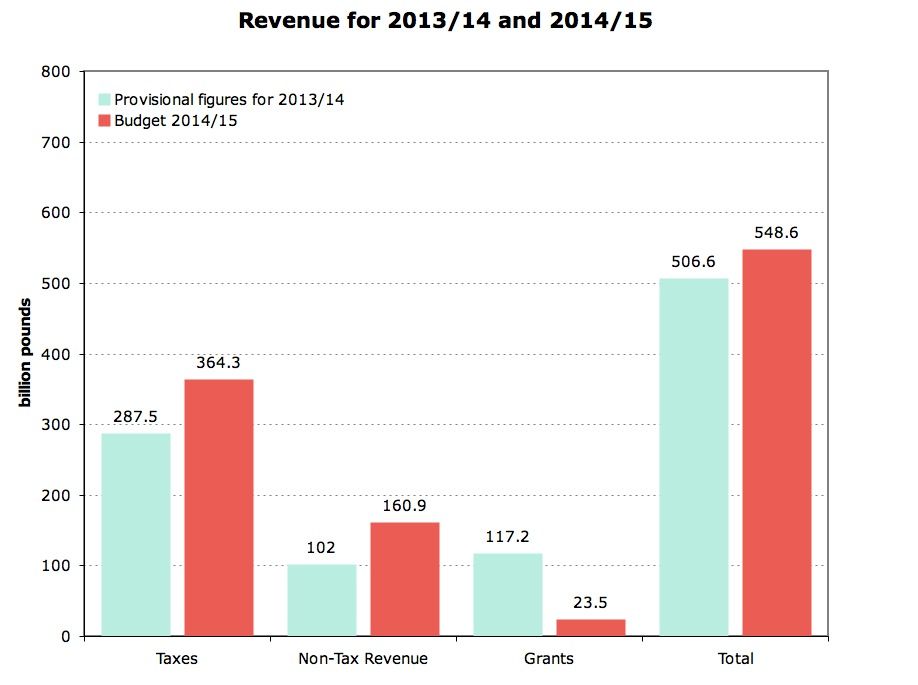 Despite anticipating a dramatic reduction in grants, Egypt’s government is relying on revenue to increase by 8.3 percent this year. It is counting largely on tax revenue to make up the difference, anticipating a 27 percent increase thanks to higher income taxes for the wealthy, the introduction of a capital gains tax and plans to implement real estate and value added taxes.

The government is also counting on a 57 percent increase in non-tax revenues, which include Suez Canal tolls, mineral and petroleum royalties, payment for licenses and services, and dividends from public companies.

And although grants are predicted to be down, the budget approved anticipates LE23.5 billion in foreign aid, while the budget Sisi rejected called for $2.4 billion, or around LE17.14 billion at official exchange rates.

**The figures used in these charts are taken from the financial statement on the 2014/15 draft budget, released by the Ministry of Finance. Although the 2013/14 fiscal year ended June 30, the figures for actual expenditure and revenue are still provisional, and subject to revision. In some cases, such as the chart on social spending, the ministry provided comparisons based on the amended 2013/14 budget, rather than on recorded expenditure. It is worth noting that those figures do not correlate with figures in the 2013/14 amended budget posted on the ministry’s website.

AD
You Might Have Missed
Where do old lesbians go to die?
What we talk about when we talk about trees
Mugamma revisited: Reimagining the building and the square
Carbon Colonies & A Green New Deal
AD
Isabel Esterman
99 articles on Mada