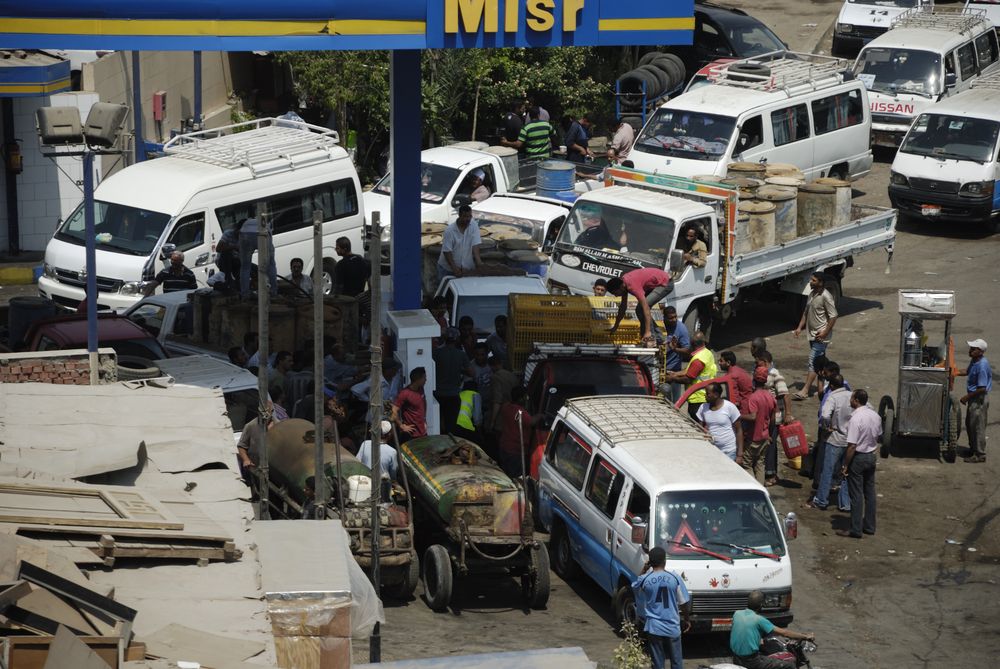 Egyptians woke up to higher fuel prices after the government announced late Friday that it will be implementing a broad restructuring of petroleum product subsidies, triggering fears over likely consequent price hikes on goods and services.

The highest increases are in some of the most commonly used petroleum products, ones that will have a direct effect on the cost of transportation of food and goods as well as public transportation, namely diesel and 80-octane gasoline.

Natural gas for vehicles, on which most taxis rely, is now priced at LE1.10 per cubic meter, a whopping 175 percent increase from LE0.40. Early on Saturday, taxi drivers in several cities reportedly protested the price hikes, blocking a number of roads in the capital and in other governorates.

Increasing by 40 percent is the price of 92-octane gasoline, which is consumed by most average vehicles, now at LE2.60 per liter from a previous LE1.85. Though a significant increase, it is not wholly out of reach for many car owners.

What is likely the least consumed petroleum product and one mainly used for more luxury vehicles, 95-octane increased by a meager 6.8 percent, to LE6.25 from LE5.85. Subsidies on this product were all but lifted in November of 2012 and many have since made the switch to the lower performance 92-octane fuel, increasing demand for the product and for a time, causing shortages at some gas stations.

For years, Egypt has been urged to restructure its wasteful and inefficient subsidy program, but successive governments have shied away from the socially sensitive move due to the anticipated political cost and the risk of social unrest. Despite this, news of the broad subsidy cuts came as a surprise to many, especially given the rate at which diesel prices have increased and the expected immediate uptick in food prices.

Prime Minister Ibrahim Mehleb said on Saturday that the increase in fuel prices will save LE51 billion in the 2014/2015 budget and that LE22 billion of that will be used to develop education and healthcare in Egypt.

In a presser held on Saturday afternoon, Mehleb added that for over 40 years no government had tackled the issue of fuel subsidies, which caused an increase in the budget deficit and poverty rates.

The Consumer Protection Agency (CPA) said that the decision may result in as much as a 200 percent in the price of some commodities, privately owned Al-Masry Al-Youm newspaper reported. Zeinab Awadallah, head of the CPA, told al-Masry al-Youm that increases in the price of fundamental items such as fuel and electricity will consequently push up the costs of transportation and shipping.

She further described the decision as random and ill-sighted, adding that new prices will anger the people.

Many criticized the timing of the decision that came during the first week of Ramadan, typically a high consumption month which already sees an increase in food prices.

Last week, Planning Minister Ashraf al-Araby had said that an increase in fuel prices is expected “very soon” – this after President Abdel Fattah al-Sisi sent the state budget for fiscal year 2014/2015 back to the Cabinet demanding a deficit lower than 12 percent, to which the Cabinet responded with a new budget that cuts spending on energy subsidies by LE40 billion. The projected deficit is 10 percent.

Wael Ziada, head of research at Cairo-based investment bank EFG Hermes, argued that “there is no good or bad timing, it is a broad move that needed to be done a while back.”

“It is not sudden. The problem is no one believed them when they said it will be implemented next week because this has been said very frequently in the past,” he said, adding that “there will be repercussions, but that doesn’t mean it’s not necessary.”

For Ziada, the main issue with the move is threefold.

“What is the socio-economic repercussion and how did the government create a safety net to shield the lower income brackets from the likely increase in prices that will accompany this move?” he asked. “What is the government’s control over price administration in regards to products and service that will see an immediate increase? Will this be a move among other moves to come? Irrespective of that we are still suffering from a very inflated subsidy structure.”

It is these very questions that have many labeling the move as ill-timed and the breadth of it as random and unconsidered.

“The decision is very late in coming and now falls outside the scope of social justice. It’s now in the context of a financial crisis,” said Reem Abdel Haliem, economist at the Economic and Social Justice unit of the Egyptian Initiative for Personal Rights.

“There has been no radical change to the system, just a removal of subsidies to combat the deficit, and it’s become a matter of who will bear the burden of the financial crisis. Those who are affected most are unfortunately already voiceless,” she added.

The key will be to see what will happen with energy-intensive industries, says Abdel Haliem.

A Petroleum Ministry official had said that the price hikes will, for now, not affect the natural gas provided to factories, adding that this will happen after the use of coal becomes effective – in itself a controversial and highly criticized decision. However, Reuters reported Saturday that the price of natural gas would increase to $8 per one million thermal units for cement factories, and $7 for iron, steel, aluminium, copper, ceramic and glass industries.

If anything has been argued for by those who urge for the restructuring of subsidies, it has been to fully implement cuts to subsidies allocated to energy-intensive industries and remain relatively lax on products that have a direct effect on the poorer segments of society.

The International Monetary Fund, a major proponent of eliminating energy subsidies, does not recommend cutting subsidies without information campaigns and public consultation, something which many argue has not been carried out ahead of this weekend’s decision. In a 2013 study of energy reforms around the world, the IMF found that clear and proactive communication with the public was a key factor in success, along with careful timing of price increases and measures to reduce the impact on the poor.

Economist Mohamed Nabil told Mada Masr that lowering subsidies on commodities such as fuel and electricity has always been a pressing issue on every government agenda since the 1990s. “The IMF has asked Egypt to lower it subsides several time,” he said.

However, no government was able to tackle the issue of subsidies, which has been considered a social contract between the people and the government. “Nazif’s government made progress in this matter, however, the process was interrupted by the January 25 uprising,” explained Nabil. He described the government’s move as an imminent yet ineffective one and by no mean a solution for the budget’s deficit.

“Subsidies on car fuel are only a fraction of the subsidies applied on other petroleum products especially the gas cylinders,” he said, adding that the decision will have an inflationary impact.

Egypt has been in talks with the IMF for a loan to prop its ailing finances since the January 2011 uprising, the latest figure being negotiated was at $4.8 billion. However, the beleaguered negotiations never brought the deal to a close, with many suspecting it is due to the fact that previous governments were not willing to make steps toward the required subsidy cuts. The recent moves may be the clearest signal yet of a possible resumption in stalled talks between Egypt and the IMF.

Over the past weeks, rumors and anonymous statements in the media about when and how energy prices will change had already led to fuel hoarding. Frequent power cuts persist and the government continues to urge citizens to ration their household consumption of power.

An expected consequence is an immediate increase in food prices that will hike up inflation given the state’s little control over market prices, namely when it comes to wholesalers who typically capitalize on moments like these to augment their already inflated price margins.

“The problem is in the inflationary effects and nothing has been done to contain this or potential speculation in the market to support the poor, specifically when it comes to diesel,” said Abdel Haliem.

Ziada agreed. “There will be increases higher than what the government has indicated especially in transportation. Transportation is one of the most profitable sectors and wholesalers make abnormal profit margins,” he added.

Still, Ziada refuted reports of a 200-percent increase in prices. “I haven’t seen the basis on which the CPA report was built, but price increases by 200 percent is unrealistic,” he says, adding that this can only happen if there is a strong and sudden currency devaluation.

And given the price manipulation that occurs within the inefficiencies of the subsidy system, “Egypt is heading in the direction of redirecting subsidies in the form of cash,” said Ziada.

“In my view this is very gradual. Prices are still well below global prices and it would not have been advisable to wait on diesel—until when? The more you keep this structure, the worse the impact is in the future,” he claimed.

“The broad subsidy program as it is, is unjust. Now there is still a difference between the cost and the selling price of products, which doesn’t answer the problem of smuggling,” a persistent issue that often leads to drastic fluctuations in prices and supply shortages. “There needed to be an end to end solution to deal with the entire structure so there’s no middle man,” she added.