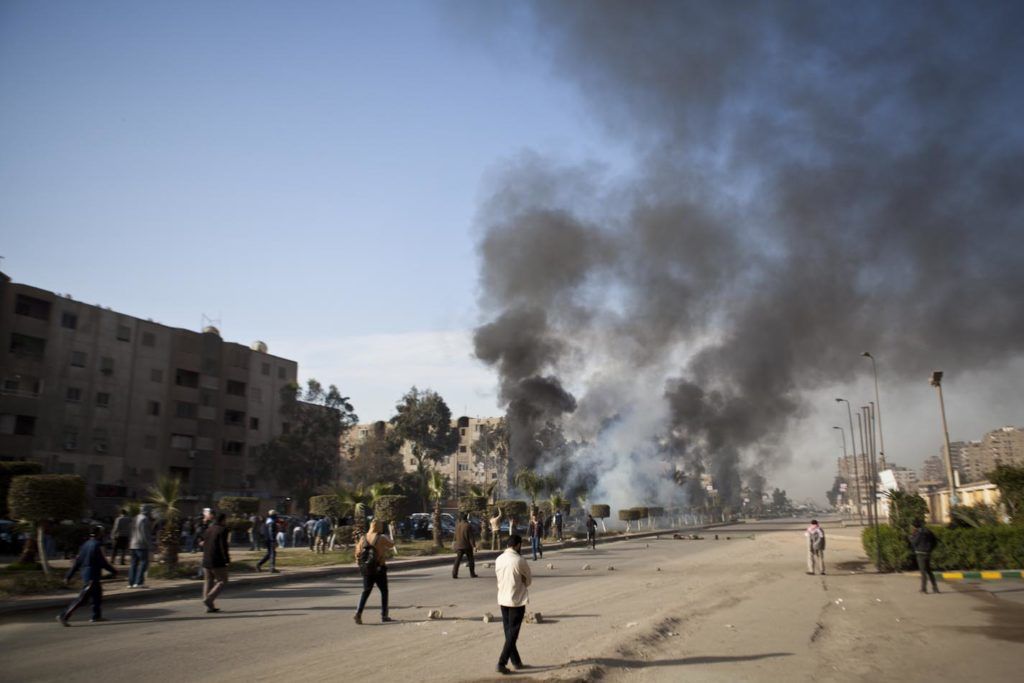 One protester was killed in Haram Street in Giza during protests organized Brotherhood supporters on the first anniversary of the ouster of the former Islamist President Mohamed Morsi, state-owned Al-Ahram newspaper reported.

Mohamed Baher, whose Facebook page indicates that he belongs to the ousted Islamist group, was shot in the chest with live ammunition, according to photos distributed on his page.

Police forces intervened to disperse protests in Haram Street in Giza as protesters attempted to block the roads. The privately owned Al-Masry Al-Youm also reported that protesters burned a police vehicle in response to the dispersal of the protest.

Dozens are being arrested and others injured as police forces disperse various protests across the country.

Security forces stated that Tahrir, Nahda and Rabea squares are closed to traffic in anticipation of escalation by Brotherhood protesters. A state of emergency was declared in Cairo International Airport as well.

Ahram reported that 15 protesters were arrested while blocking 26 July Road as they attempted to spill oil on the street to prevent cars from moving. The arrested protesters allegedly had Molotov cocktails in their possession as well.

34 others were arrested in various protests in Beheira, Beni Suef, Minya, the Red Sea, Fayoum, Suez and Gharbiya governorates, according to Ahram.

Ahram also reported that another group of five protesters were arrested as they blocked the road in front of 6 October Club. They allegedly also had Molotov cocktails on hand and burned tires in order to block traffic.

The official Middle East News Agency (MENA) reported that police forces are on their way to disperse other protests in Matareya and Mohandessein.

Al-Gamaa Bridge was blocked by police forces in order to prevent Brotherhood protesters from entering Nahda Square, which witnessed a violent dispersal of a protest camp last August, leaving over 80 dead.

In the coastal city of Alexandria, Ahram reported that the number of detainees rose to 40 as police forces continue to disperse various protests across the city.

The protests come amid calls by the Brotherhood-affiliated National Alliance to Support Legitimacy to demonstrate during the first anniversary of Morsi’s ouster and the instatement of a military-backed government.

The alliance hailed the protests in an official statement, adding that they are the ones who “decide on Egypt’s future in the streets”.

Topics
Related
July 3 anniversary
Leaders of pro-Brotherhood alliance arrested
As the Muslim Brotherhood-affiliated National Alliance Supporting Legitimacy braces for a day of protests
Ajnad Misr
Series of explosions rocks Cairo on anniversary of Morsi’s ouster
On Thursday, Cairo witnessed another series of small-scale bombings on the day that marks the one-year