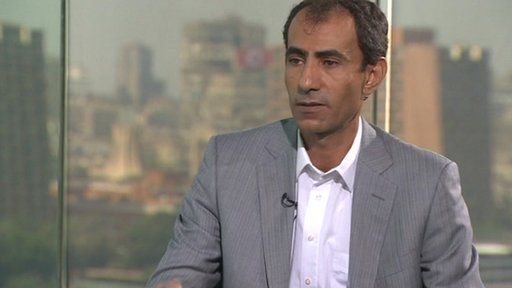 While several television presenters have shifted their political views over the past year, and now increasingly demonize the Muslim Brotherhood and defend the military-backed government, Fouda has been one of the few public figures to maintain his critical stance toward the state.

As other television pundits accuse Fouda of treason for his dissident rhetoric, a media smear campaign against him reached its apotheosis this week.

In an article published on the privately owned Al-Bawaba news site, journalist Madiha Emara demanded that both ONtv and President Abdel Fattah al-Sisi ban Fouda and other opposition journalists from the airwaves on the grounds that they are destabilizing the country.

Emara’s accusations against Fouda were wide ranging — she suggested he had questionable relations with Al-Qaeda and the US, and then condemned him for “disfiguring the public consciousness and trying to shake nationalism.”

She went on to call Fouda “an epidemic” and a “dangerous dark spot” who represented a danger to the country.

The journalist claimed she instinctively mistrusted Fouda since the beginning of his journalistic career, which she acknowledged was impressive. Since his early days working for the Qatar-based Al Jazeera satellite network, Emara said she was suspicious of Fouda’s accent, which sounded more “oriental” than Egyptian.

The authorities must “cut the tongues” of the politically and journalistically corrupt in order to allow the country to advance, Emara declared at the end of her article, pointing in particular to journalist Belal Fadl and talk show hosts Liliane Daoud, Mahmoud Saad and Mona al-Shazly. She described the latter group as a “dormant cell.”

In another article published this week in the privately owned Al-Watan newspaper, writer Mahmoud al-Kardousy called Fouda an “agent,” rhetorically musing whether he was born that way or his work in the media had corrupted him.

Kardousy also called out Fouda’s former colleague Reem Magued as “equally obscene and degenerate,” while he denounced Daoud as “a mutant creature.”

Fouda must hate his country, Kardousy wrote, adding that he should swiftly be put on trial due to his career in international media.

Fouda has also recently been bashed by other television hosts aligned with the state, such as Ahmed Moussa.

In Wednesday’s television appearance, Sawiris said that he was pressured to intervene in his station’s programming under the administrations of former President Hosni Mubarak, the Supreme Council of the Armed Forces and the Muslim Brotherhood, but that he had always refused to do so.

Those who don’t like what Fouda has to say should just change the channel, he advised.

Fouda started his career in the BBC’s Arabic service, then moved on to his hit investigative show Top Secret on Al Jazeera. Since 2011, his show Akher Kalam (the last words) has been described as one of the country’s most trustworthy news sources, and the most consistently representative of the revolution under the different post-Mubarak regimes.

In the last year, strong critical voices such as Dina Abdel Rahman and Reem Mageud stopped their shows in protest against the current state of the media. Popular satirist Bassem Youssef also halted his weekly show recently, citing political pressure.