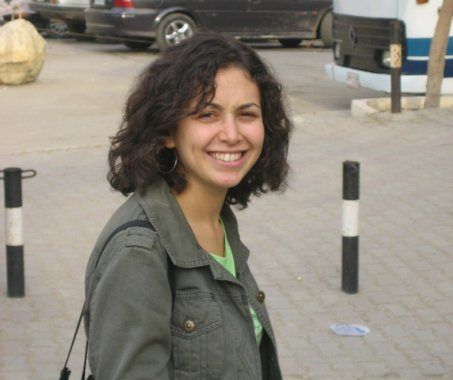 Many speak professionally of Yara Sallam, 28, as a skilled lawyer and distinguished researcher, but some also speak of her impressive passion, one that would stay with her despite everything.

The prosecutor ordered Yara’s detention for four days pending investigations, after she was arrested in Heliopolis last Saturday for participating in a protest against the Protest Law. She is now facing trial that is set to start on Sunday.

After he heard the news, Ahmed Nassar, one of Yara’s former colleagues wrote on his Facebook page: “I can’t make how someone as pure and friendly as Yara can be incarcerated.” Nassar explained how he was tied to Yara through a friendship that was born only a few days after he met her. “Yara is undoubtedly one of the rare people towards whom you get a sense of comfort and trust.”

Yara’s interest in human rights came early, when she was 15. It was the reason she studied law and pursued an LLM degree at the University of Notre Dame.

“My interest in human rights emerged when I was a member in Al-Nosoor al-Sagheera (The Young Eagles), which was working on children’s rights,” Yara said in an interview in early 2013. The group attracted middle-class families with leftist leanings and who sent their children to the group’s meetings and camps in the 1990s and early 2000s. The group contributed to engaging these children with human rights issues, particularly children’s rights.

“Al-Nosoor al-Sagheera was an important step in Yara’s formation,” Rawya Sadeq, her mother, a translator and a painter, says. “This is besides a number of activities in which Yara participated through the Heliopolis Library. Through these activities, Yara started traveling when she was 14.”

“Even though she is timid, she is also cheeky. And this is what made her go to study law,” Sadeq adds.

Soon after she graduated from the Faculty of Law at Cairo University, Yara started her professional life by working as a researcher at the Civil Freedoms Unit at the Egyptian Initiative for Personal Rights.

After she completed her MA, she worked as a paralegal at the African Commission for Human and People’s Rights in Gambia.

When she returned to Cairo following the 2011 revolution, she joined the Nazra Institute for Feminist Studies, where she managed the “Women Human Rights Defenders Program,” which focused on providing legal, medical and moral support to women engaged in public matters, preserving their space in the public field, and supporting them in light of the violations they face at a time of increasing violations against women in public space.

This program that Yara headed for a year was one of the first tools to document violations against women, provide necessary support for them and to work on limiting these violations. This work led to her nomination for the Human Rights Defenders in North Africa prize for 2014.

In June 2013, Yara returned to EIPR as a researcher in the Transitional Justice Unit. Mohamed al-Sheewy, one of the researchers in the same unit, worked with Yara for over a year. He says that the one thing that makes Yara special is her passion. “She is a very passionate human being. She is very loyal to work. Her enthusiasm is contagious. She shares her expertise with everyone. She is ready to learn from others.”

Even though Yara’s name might not be as well know as other activists, she is deemed to be one of the most professional and credible human rights activists out there. “Yara is different,” one of her older friends says. They first met in 1998 at the Al-Nosoor al-Sagheera camp. He speaks of how Yara’s profession is intertwined with her own emotions. She follows her feelings. “Passion might be the best word to describe her,” were his words.

“Shaghaf,” the Arabic word for passion, is featured on Yara’s blog, where she talks about nearly everything: the revolution, the harassment, death and love.

Despite the hardships and hurdles she faces in her work, Yara is always capable of adding so much happiness whenever she is. Her eyes brightened up when she spoke of her new blue bicycle and how much fun it is to commute with it from Garden City to Heliopolis, where she lives.  With so much enthusiasm, she talked about her diving trip in Dahab, and the carpentry workshop she attended. She said she wishes to develop her carpentry skills, so that one day she can make furniture.

The day Yara was arrested, she had planned to attend Mada Masr’s first anniversary party. Instead of enjoying a night of music and celebration, Yara spent Saturday night inside the Heliopolis Police Station, along with 30 other detainees.

According to a joint statement by human right groups, Yara was with her cousin, Shehab Fakhry Ismail, when a group on men in civilian attire arrested them on Saturday afternoon. They then handed them over to security personnel, who drove them to the Heliopolis Police Station after they were verbally harassed and forced into the police deportation vehicle. Despite giving similar statements, Ismail was released Sunday dawn, while Yara, along with 24 others, were referred to public prosecution, which decided to imprison 23 of them (including Yara). They were charged with defying the Protest Law, vandalizing private and public property, using force with the aim of terrorizing citizens, as well as possessing incendiary material.

Yara’s friends and lawyers attest that the charges are ridiculous, if one only takes a closer look at Yara’s demeanor.

AD
You Might Have Missed
Mugamma revisited: Reimagining the building and the square
What we talk about when we talk about trees
Carbon Colonies & A Green New Deal
Where do old lesbians go to die?
AD
Hanan Elbadawi
3 articles on Mada