Activists protest in solidarity with political prisoners
By
Mada Masr 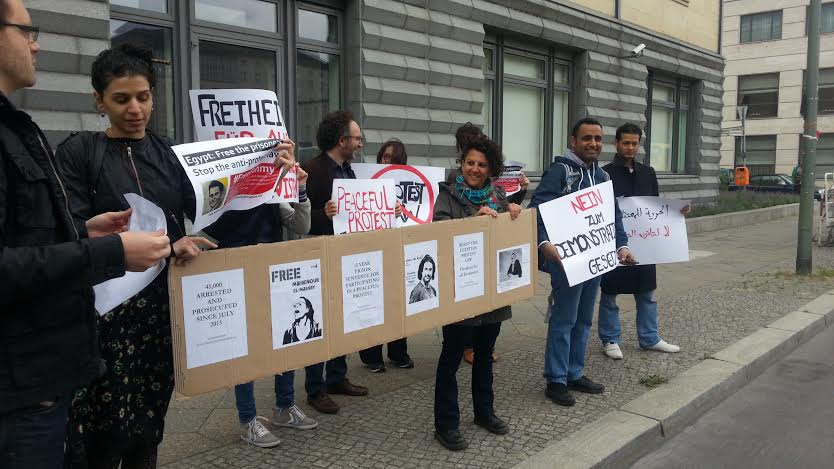 Activists in Egypt took to the streets on Saturday to protest the detention of prisoners of conscience. Protests worldwide were also organized in solidarity with the Cairo action.

The protest took off from a metro station in Heliopolis and protesters marched toward the Etthehadiya Presidential Palace. Their demand was the release of unlawfully detained prisoners and inmates charged through flawed judicial processes. They also demanded an end to the Protest Law, passed last November.

Eyewitnesses however said that the march was attacked shortly after it set of from Heliopolis, with police throwing tear gas and plain clothed attackers throwing glass fragments at protesters. Activists also reported arrests.

Renowned activist Mona Seif said on her Twitter account, “This is a peaceful march with mostly families and mothers of detainees. Damn it.” She also said that her sister, Sanaa Seif — also the sister of Alaa Abd El Fattah — was arrested during the march.

Protesters carried images of detainees, including Abd El Fattah, Mahienour al-Massry, Ahmed Douma and others, all charged under the Protest Law.

In a letter signed by the Comrades of Cairo and published by Jadaliyya, activists wrote, “On Saturday, we march to the Presidential Palace. And around the world friends and comrades have stepped forward in solidarity. Though we know it will be a long time before we reach the dizzying heights of 2011 again, moments of unity and of international struggle are as important as ever. The right to protest is not just under attack in Egypt but is being repressed and criminalized across the globe.”