Border-crossing on the bride’s side

19,144 migrants have died trying to cross the Mediterranean since 1988 (not including undocumented accidents).

268 Syrians and Palestinian Syrians drowned in a shipwreck near the coast of Sicily in October 2013.

800 out of the 5,000 migrants that landed in Italy by sea last week were Syrians. The rest were mostly Eritrean and Sudanese.

89,000 Syrians and Palestinian Syrians have obtained asylum since 2011 (only 4 percent of the people who moved to neighboring countries or are internally displaced as a consequence of Syria’s war).

8 Egyptians were arrested in Italy in March for smuggling 1,000 migrants from Sicily to Northern Europe.

The 2003 Dublin Regulation says undocumented migrants can claim asylum only in the first European country they enter, so they may not cross Europe’s internal borders. To enforce this, local authorities have to take fingerprints upon arrival.

In Sweden refugees are granted accommodation, free education, healthcare and the possibility to reunite with their families.

In the next weeks, months and years there will be more illegal crossings, asylum claims, shipwrecks and drownings. These words, next to higher numbers, will fill newspaper headlines and human rights reports. Images like these and these will be published. Whenever there is evidence to show, international media, governments and institutions perform the ritual public condemnation of the latest tragedy, commemorating the dead and committing to “act” and address the “emergency.” Extraordinary military operations are launched to patrol the coasts and European territorial waters.

Detention centers are built. Bilateral cooperation agreements are signed. According to the latest reports, such emergency measures as well as public condemnations and awareness campaigns have generally failed to have a real impact on the problem.

Antonio Agugliaro, a filmmaker, Khaled Soliman al-Nassiry, a poet, and Gabriele Del Grande, a writer, witnessed part of the consequences of Syria’s war and other conflicts in their city, Milan. Thousands of stranded migrants who survive the sea journey and manage to elude local authorities periodically gather near the train station there, trying to leave the country to reach relatives, look for jobs or join friends elsewhere. So they decided to get involved.

It all started with a joke: “Who would ask for a bride’s documents?”

Fourteen days later, they were ready to leave for Sweden with Abdallah, Manar, Alaa, Mona, Ahmed and Tasnim from Syria and 18 Italian friends, all disguised as the invitees of a wedding convoy. After four days and 3,000 km, they uncorked a bottle of champagne in Malmo, carrying with them more than 100 hours of semi-improvised footage that would be edited as a film, “On the Bride’s Side,” that is currently in post-production.

“When we had the idea of the fake wedding caravan, the objective was not making a film. We wanted to help our friends reach Sweden,” says Del Grande. “We were all very moved by what was happening. Khaled as a Palestinian Syrian living abroad who saw his compatriots fleeing the war. Antonio as an Italian citizen shaken by the two horrific shipwrecks in Lampedusa in October 2013, which cost the lives of more than 500 people. And me, as a journalist who had spent time in Syria. I saw the war there and I saw it again back home through the accounts of Syrians who landed in Italy.”

The Italian writer has been documenting migrants’ deaths at sea in his blog, unequivocally called FortressEurope, since 2005. Despite his and his colleagues’ efforts to expose and analyze the facts, the situation has worsened and the policies have not changed. So rather than producing yet another documentary, book or reportage about the well-known tragedy, they turned fiction into reality and made a film of adventure and celebration to break the narrative of the migrant as the hopeless victim, worthy of attention only when grateful, useful or dead.

The directors used their own money to organize the trip and rent the film equipment. Four weeks ago they launched a crowd-funding campaign on Indiegogo that gathered 7,500 euro in the first day, and has now raised 58,000 euro (78 percent of the film’s total production budget).

The campaign explicitly asks the audience to get involved and take sides by spreading the catchphrase “Io sto con la sposa,” Italian for “(I am) on the bride’s side.”

“We decided to start the campaign to win a bet with ourselves and show the world there is a community of people who are fed up with counting the dead at sea, and are ready to support an act of civil disobedience like this one,” says Del Grande. “The film tells a story of hope and tells of another Europe, not that of the xenophobic parties or populist movements, but of hospitality, solidarity and joy, that welcomed our caravan during our journey; of the 10,000 subscribers to our Facebook page. We’re receiving selfies with “Io sto con la sposa” banners from Iraq, Egypt, Sweden and Tunisia. Instead of saying how the world sucks, we have said that this is the world that we want.”

The three directors see the film as a collective political action and ambitiously consider it a manifesto of an emerging Euro-Mediterranean movement for the free circulation of people.

For helping the group of five migrants travel through Europe they themselves risk a 15-year jail term for human trafficking. 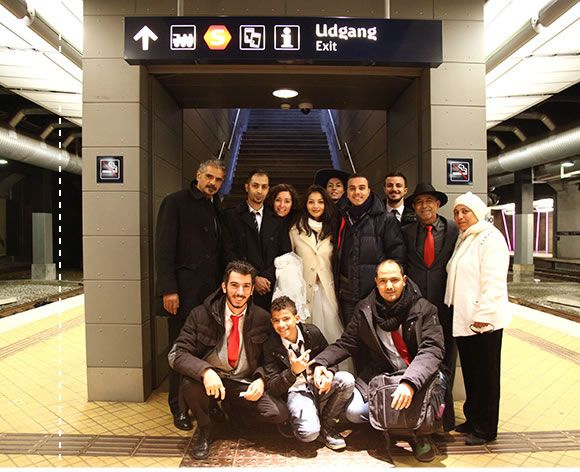 During the trip, Nassiry coincidentally received a phone call in which he was informed that he had finally obtained Italian citizenship.

“Being a Palestinian, I’ve never had a citizenship before,” he says. “My first child — born last week — will be 100 percent Italian. At least on paper.”

As the film was being edited, the results of the European elections showed an increasingly conservative political panorama: Right-wing parties gained consensus through media and political campaigns that identified immigration as a main cause of economic instability.

In the dominant public discourse, migration is referred to as a problem to eradicate rather than an organic phenomenon.

International organizations occasionally allocate resources to produce media campaigns to clarify the distinction between irregular migrants and asylum seekers, and raise awareness about the need to prioritize access to travel for asylum seekers. In 2010 the International Organization for Migration (IOM), together with the Italian Ministry of Labor and Social Policies and the National Council of Childhood and Motherhood, produced a short featuring Egyptian film star Amr Waked to inform Egyptian youths about the dangers of traveling illegally.

It tells the stories of young men from poor rural families willing to risk it all for the dream of a better future that will never come. The explicit aim is to deter young Egyptians from illegal travel.

“Last year 100,000 migrants left Italy,” points out Del Grande. “It is the effect of the economic crisis, not of awareness campaigns. The main pull-push factor is the job market.”

“As long as the economy thrives there will be people willing to risk it all to come and search for their place in the world, a good salary and the alleged happiness. No matter how powerful the campaign,” he continues. “Access to mobility is the first problem. Liberalizing visas would not threaten the chances of those applying for asylum — on the contrary it would translate into a drastic reduction of the thousands of mendacious requests submitted every year all over Europe by people whose only chance to travel is through asylum.”

Differentiating migrants based on their needs, desires and motivations implies that traveling is forbidden unless you are “desperate enough.”

“There is a whole border system aimed at measuring this despair, with interrogations, bureaucratic forms, medical checks,” says Del Grande. “That third degree interrogation serves at reassuring our conscience. It is true that we are surrounded by mass graves in the Mediterranean, but we are still democratic because we maintain our faith to the right to asylum. I believe that in the global contemporary world, traveling should be the norm and not the exception.”

Films and other artistic projects targeting audiences with a clear political messages and explicit calls to react have been criticized for exploiting what Luc Boltanski has referred to as “the spectacle of distant suffering” (drawing from Hanna Arendt’s ideas around “the politics of pity”), and for being eventually ineffective or even harmful for the protagonists by reproducing stereotypes that justify the status quo, while the privileged observer experiences a self-satisfying compassion for the victim that gives the illusion of “being on the right side.”

This was the case in “Kony 2012” (2012), which ultimately advocated for military intervention in central Africa, and in “Born into Brothels: Calcutta’s Red Light Kids” (2004) which gathered funds by selling photographs taken by street children at prestigious art galleries worldwide.

Artist Renzo Martens, on the other hand, plays with the documentary format to expose the hypocrisy behind humanitarian and journalism missions in Africa in his film “Enjoy Poverty” (2008).

Attempts like Martens’ question the promise of objectivity of the documentary format, and trigger reflection around the power of images and imagination as a vehicle for change.

“Using art, exploiting the language of cinema for political means, can help change the aesthetic of things,” Del Grande says. “It can show beauty and humanity where politics and journalism teach us to see only numbers and monsters.”

The third cinema decolonization project in the 1960s and 70s relied on audiences as active participants, as opposed to passive consumers, in promoting a political sensitivity to the need to change laws. Today, the internet and social media explosion allow for a potentially instantaneous diffusion of revolutionary ideas that bring people together against injustice, though this hasn’t yet translated into a sufficiently powerful system of political action. 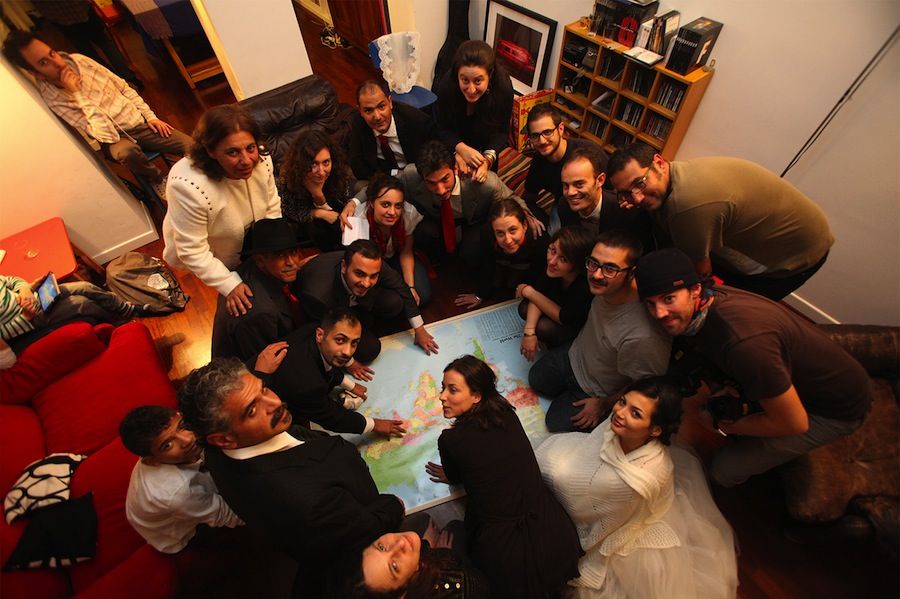 “I hope that through this film, more people realize there are men and women forced to leave a country at war without even the right to escape elsewhere,” Tasnim, the fictitious bride in “On the Bride’s Side,” told Italian news agency Redattore Sociale. “Like Manar’s father, who just wants to save his son from barrel bombs. He is only doing what any good father would do, but he’s not allowed.”

Alaa decided to escape Syria (via Jordan, Egypt and Lampedusa) taking Manar, his 12-year-old, with him and leaving the rest of the family behind, with the hope that in Europe his son would be able to cultivate his passion and talent as an artist. During the trip to Sweden, Manar, an aspiring MC, entertained his traveling companions by writing lyrics for rap songs.

We cannot feel pity for characters like Alaa and Manar. Instead, we admire their courage and celebrate their hope in the future despite the tragedy they are going through. Rather than show another version of the same image that fails to provoke anything other than compassion for others’ suffering and absolve our collective sense of guilt, producing new images, like this positive one, might actually challenge the relationship between the observer or sympathizer and those who are less fortunate.

AD
You Might Have Missed
Carbon Colonies & A Green New Deal
What we talk about when we talk about trees
Mugamma revisited: Reimagining the building and the square
Where do old lesbians go to die?
AD
Laura Cugusi
7 articles on Mada

Topics
Related
activists
‘The Infiltrator’: Shedding light on the invisible hands
Heba Afify | Mohannad Galal has infiltrated the lines of state-serving civilians, seen aiding the military and police
conversations about the arts
How to measure the Mediterranean
Jenifer Evans | Nothing really dies in Cairo, it's always circulating.
deportations
Italy deports 40 Egyptian migrants
Italian authorities deported 40 Egyptians who were attempting to enter the country without visas, the
Egyptian migrants
Six Egyptian migrants drown off Sicilian port
The six migrants who drowned off the Sicilian port of Catania on Saturday have been identified