Govt announces campaign to save youth from atheism
By
Mada Masr 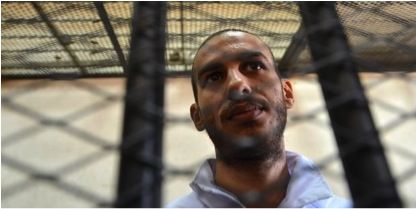 The newly formed Cabinet is planning a campaign to combat atheism, according to an official statement released Wednesday.

Neamat Saty, the Youth Ministry’s director of civic education, would work with Ahmed Turky, the head of the Endowment Ministry’s mosques management unit, and a team of psychiatrists to form a national strategy to eradicate atheism.

Although Article 64 of Egypt’s recently passed Constitution stipulates that “freedom of religion is absolute,” the ministries plan on “confronting and abolishing [atheism] through religious, educational and psychological means handled by experts in these fields,” according to a report published by the state-owned newspaper Al-Ahram.

The plan is part of a Cabinet-wide effort to “confront all issues that negatively affect [youth] and hinder the steps of development towards the future.”

Turky told Mada Masr in a phone interview that there is a protocol between the two ministries to address various intellectual “threats” facing the country’s youth.

“Previously, we launched a similar campaign against religious extremism where we targeted 200,000 youth whom we saw to be most vulnerable to such ideas, especially in Sinai,” Turky said.

He added that the two ministries are now hoping to combat certain “intellectual pests” that target Egyptian youth, like atheism, asserting that the scope of atheism’s reach in Egypt is still being determined by a joint research committee.

“We are taking preventive and preemptive measures. We do not want to see atheism being endemic in Egypt,” the official explained.

Turky pointed to the ongoing standoff between politics and religion, and arguments concerning how those two realms should ideally interact, as direct causes for an upsurge in both religious extremism and atheism.

“The ongoing conflict will lead youth to either be religious extremists or push them more toward profanity and atheism,” Turky claimed.

But some say it’s problematic for state institutions to get involved in such matters.

Amr Ezzat, a researcher on religious freedoms at the Egyptian Initiative for Personal Rights (EIPR), told Mada Masr that state bodies are meant to serve all citizens, regardless of their religious beliefs, and it’s extremely dangerous for them to launch campaigns against certain religious views.

“If we are talking about a modern civil state, the existence of a ministry that runs the affairs of Islam in the first place [the Endowments Ministry] is problematic in itself,” Ezzat argued.

Initiatives like the one announced on Wednesday “do not simply campaign against atheism, but they call for violating the rights of those citizens who hold such beliefs in the first place, which is considered mere incitement. These initiatives propagate that atheists threaten the national unity of the society, while the existence of such religious institutions at the first place is the threat,” he continued.

Belying Ezzat’s concerns are actions like the one taken in March by a Ministry of Interior official in Alexandria, who declared that a special police task force would be formed to arrest a group of atheists residing in the coastal city who were open about their beliefs on Facebook.

In a phone interview with presenter Mohamed Moussa on his television show Redline, aired on the Honest satellite channel, Alexandria Security Directorate chief Amin Ezz al-Din said that the task force would be spearheaded by police officers with expertise in such “crimes,” and that they would legalize arrest procedures against these controversial activists.

The ministries’ campaign echoes recent attacks on atheism in local media, a discourse that is particularly prevalent on private satellite channels. In the same episode in which he interviewed Ezz al-Din, Moussa called for the arrest and execution of an atheist he had hosted on his show as punishment for his beliefs.

In another high-profile incident, a television host on the popular Sabaya program, aired on Al-Nahar satellite channel, kicked her guest off the show live on air for expressing her anti-Islamic views.

On a similar note, the EIPR issued a statement Thursday condemning the 6-month prison sentence levied against a Coptic teacher in the southern governorate of Luxor. The teacher was found guilty of religious blasphemy and defaming Islam.

In its statement, EIPR cautioned that “freedom of opinion and expression is imperiled by individuals and institutions that seek to impose moral guardianship on the citizenry, in a climate hostile to liberties and supported by the governing authority.”

The legal persecution of religious minorities is not unique to the newly sworn-in government. Former President Mohamed Morsi’s yearlong administration was broadly criticized for its perceived crackdown on religious freedoms, as well as a wave of lawsuits against political dissidents and religious minorities accusing them of insulting Islam.

Activist Alber Saber was sentenced to three years in prison by a misdemeanor court in January 2013 for insulting religion after he published a video on his Facebook page promoting atheism.

Topics
Related
atheism
HRW calls on Egypt to stop prosecuting atheists
Human Rights Watch (HRW) issued a press release on Wednesday in which they called on Egyptian authorities
atheism
Council of Churches discusses ways to tackle atheism in Egypt
The executive committee of the Egyptian Council of Churches convened for a meeting on Tuesday
Alexandria
Police vow to arrest Alexandria-based atheists
A special police taskforce will be formed to arrest a group of Alexandria-based atheists who declared
atheism
Judge orders arrest of a student who declared atheism
In a new type of arrest for Egypt’s legal records, on Wednesday an investigative judge in the general