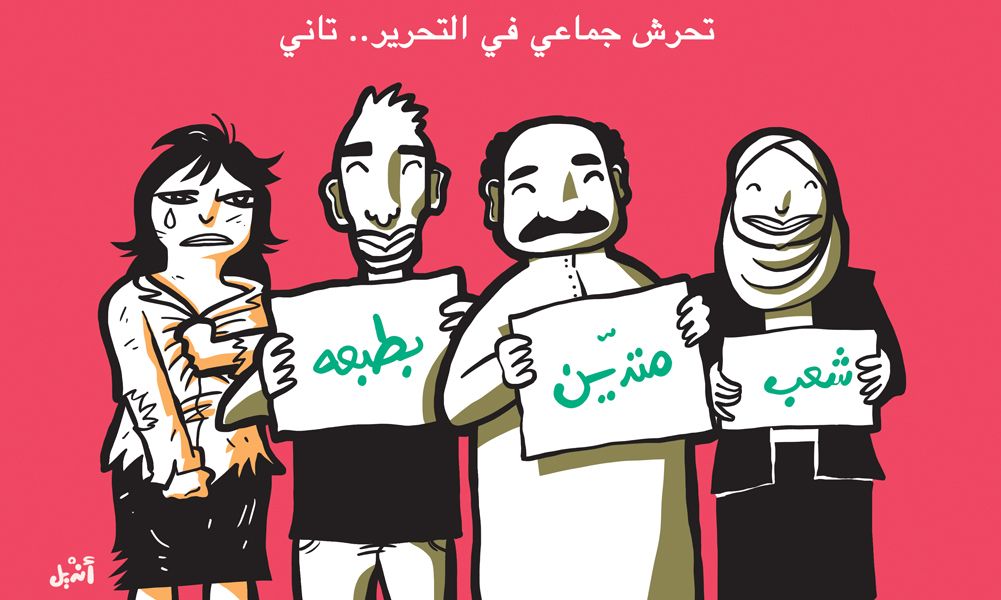 Adding further to what’s left of the military-Islamist polarization of Egyptian politics, Armed Forces and Brotherhood supporters traded blame over several incidents of sexual assault that occurred in Tahrir Square on Sunday night.

On Sunday, as masses took to Tahrir Square to celebrate the inauguration of President-Elect Abdel Fattah al-Sisi, at least five cases of sexual assault were documented by different groups, while a video that later went viral showed one case of a mob surrounding a woman, stripping and violently assaulting her.

The Freedom and Justice Portal, a mouthpiece for the Brotherhood, reported on Monday that the “group rape scandal” reflected “the moral degradation that the supporters of Sisi have reached.”

The same website quoted the “Revolutionary Coalition for the Women of Egypt” as saying that they reject the sexual assault incidents that happened in Tahrir. They add that the newspaper rejects the incident, saying that even if these women are supporters of Sisi’s “coup” against the Brotherhood, they shouldn’t be attacked.

“What people are not aware of is that those who raped the nation are the same as those who want to facilitate immorality and vice, leaving the women of Egypt without a protector and a shield, prey to those who lack morals in the streets,” the coalition was quoted as saying.

“The rape of that woman echoes Sisi’s rape of Egypt as a whole. It is most ironic that on his first day as officially (albeit illegally) president of this homeland, he is unable to safeguard the safety or security of his own supporters,” IkhwanWeb, another Brotherhood mouthpiece, wrote.

At the same time, Sisi supporters blamed the Brotherhood for the attack. Dalia Ziada, director of the Ibn Khaldun Center for Democratic Studies, told privately owned CBC channel host Lamis al-Hadidy that “what happened is a deliberate terrorist attack.”

Ziada claimed that after studying the videos and speaking to eyewitnesses, she was able to confirm that the perpetrators of the attack were from the Muslim Brotherhood, “to distract the world and the media from the civilized scene,” she said, in reference to Sisi’s inauguration. “The Muslim Brotherhood are the best at exploiting the women,” she added.

The National Council for Women similarly issued a statement saying that the incident was an intentional attempt to sully the joyful scenes surrounding Sisi’s inauguration.

“These immoral acts cannot be perpetrated by honorable Egyptians who were behind the January 25 and June 30 revolutions, where the squares of Egypt were filled with millions of people for a long time and there wasn’t one case of rape,” the statement claimed.

In response, Mozn Hassan, the head of the Nazra Center for Feminist Studies, explained that sexual assaults have become commonplace in Egypt, with almost all gatherings in the last three years witnessing acts of sexual violence.

But even groups who engaged with sexual violence in large political gatherings added to the tendency of politicizing the violence. Mostafa Bahgat, who led some interventions on the ground to prevent acts of sexual violence and rescue victims with the Operation Anti-Sexual Assault group, explained this politicization.

“Some of us believe that sexual assault is a social problem originally, and because it is an existing social problem, it can be used by some parties, including the state,” he said, with the aim of scaring women from participating in street politics. Bahgat added that some conducted field research over the past two years showing that some gangs committing violence against women in Tahrir Square and other places are in fact paid by political groups.

“However, what happened on Sunday is most likely the everyday sexual assault problem in Egypt, like what happens in Eid celebrations,” he argued.

Mobs of sexual assault flourish in national holiday festivities, as well as in Tahrir during political gatherings.

Sisi also called on citizens to help “reinstate the true spirit of ethical and moral values in Egyptian society.” Families’ efforts should come in parallel with state efforts, Sisi said according to the statement, calling sexual harassment “alien to the best principles of Egyptian culture.”