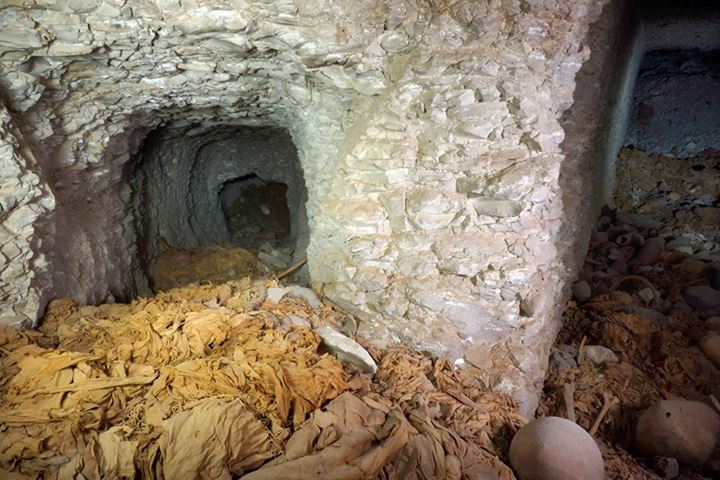 A team of Spanish archaeologists have discovered a royal tomb near the southern city of Luxor dating back to the Eleventh Dynasty, reported the Ministry of Antiquities on Tuesday. It has been described as a neatly carved square-shaped burial chamber.

Antiquities Minister Mohamed Ibrahim issued a press release explaining that this tomb belonged to “an individual from the royal family, nobility or a high-ranking statesman.” The large size of the burial chamber and its construction also indicate that the owner was of noble or royal blood.

A joint team of Egyptian and Spanish archaeologists are examining the dimensions, contents and history of the tomb to identify its owner.

Located around 700 kilometers south of Cairo, this funerary chamber was unearthed on Monday while a Spanish team of archaeologists, headed José Galan, was exploring funerary wells from a later dynasty (XVII/17th — circa 1580 BCE to 1550 BCE) around the same site.

Luxor — formerly known as “Thebes” and thought to have been inhabited since 3,200 BCE — was intermittently the capital of Ancient Egypt, since the rule of the 11th dynasty until the 19th dynasty (circa 2100 BCE to 1100 BCE).

The area has the highest concentration of temples, tombs and artefacts in the country, representing over 60 percent of all (discovered) Ancient Egyptian remains.

“This discovery confirms the presence of many tombs from the 11th dynasty in the Dra’ Abul Naga region,” reported AFP, quoting Galan.

Located near other royal burial sites on Thebes’ west bank of the Nile, Dra’ Abul Naga was used as a royal necropolis, especially during the 17th dynasty.

Citing the chief of the Egyptian Antiquities Department, Ali al-Asfar, the state-owned MENA News Agency reported on Tuesday that this newly discovered chamber may have served as a funerary storage room, “as it contains a large quantity of human remains, tools and pottery.”

Al-Asfar added that this chamber might also have been utilized for other purposes until the 17th dynasty. Photos of the new discovery show evidence of scraps of burial wrappings, bones and clay pots.