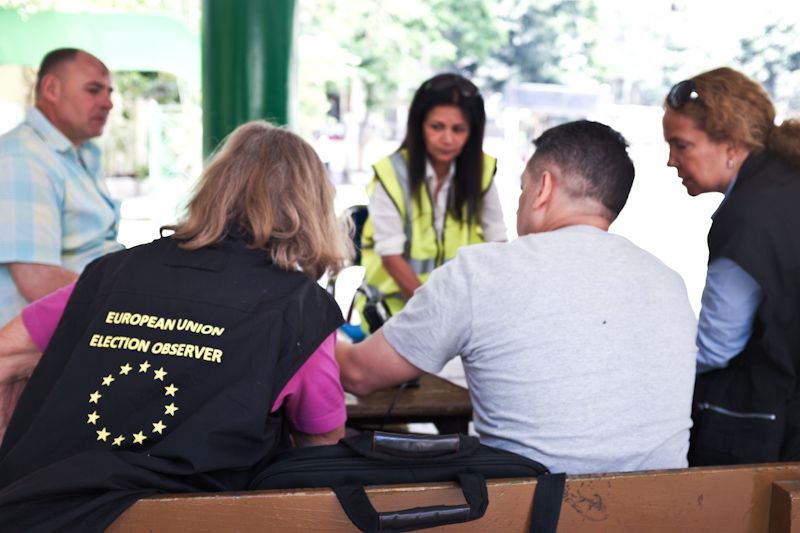 Two members of the European Union Election Observation Mission in Egypt left a conference held by the National Council for Women on Saturday following harsh criticism by the head of the council, Mervat al-Talawy, and Judge Tahani al-Gebali, who accused them of overstepping their boundaries.

Talawy accused the European Union mission of interfering in Egypt’s internal affairs, which comes as a surprise as she has herself served in several leading positions in the United Nations throughout her diplomatic career. She has also held the post of deputy foreign minister, and has served as an ambassador to several countries, including Austria and Japan.

After reading the EU mission’s preliminary report on the recent presidential election, Talawy said, at the start of the conference which was held to discuss the participation of women in the election, that the report undermines the credibility of the EU and its mission everywhere. The report, she added, indicates an insistence on animosity toward Egypt and denying the will of the Egyptian people.

Talawy ended her harsh speech to the mission representatives with: “Please tell the EU if you continue to be enemy to Egypt, you are the losers, we are the winners. You are out of the Middle East.”

Following the criticism, the two representatives of the EU mission attending the meeting got up and left as the room erupted with applause, with some audience members yelling, “long live Egypt” and “God is great.”

Judge Tahani al-Gebali, who attended the meeting, also directed criticism to the representatives of the mission and suggested that Talawy demand that they leave.

Gebaly stated that the report is “full of lies.”

Talawy said that the delegation exceeded the limitations of its mission to oversee the election by discussing the judiciary, the crackdown on civil society and other internal affairs.

The EU mission had released its preliminary report on the presidential election, stating that while the voting process itself was fair, the environment surrounding the election was largely undemocratic.

In a section focusing on the political context surrounding the election, the report highlighted recent state violations, such as violence toward street action, crackdowns on activists and mass death sentences issued recently.

In an interview on Sunday morning on ONtv, Talawy said she hoped her gesture will deliver a message to the European Union, namely that the Egyptian people will not accept any insults and will be critical of reports written about it.

“We uncovered their mistake, which is part of a conspiracy insisting not to accept that 30 June is a revolution and to deny all the accomplishments we’ve made since then,” she said.