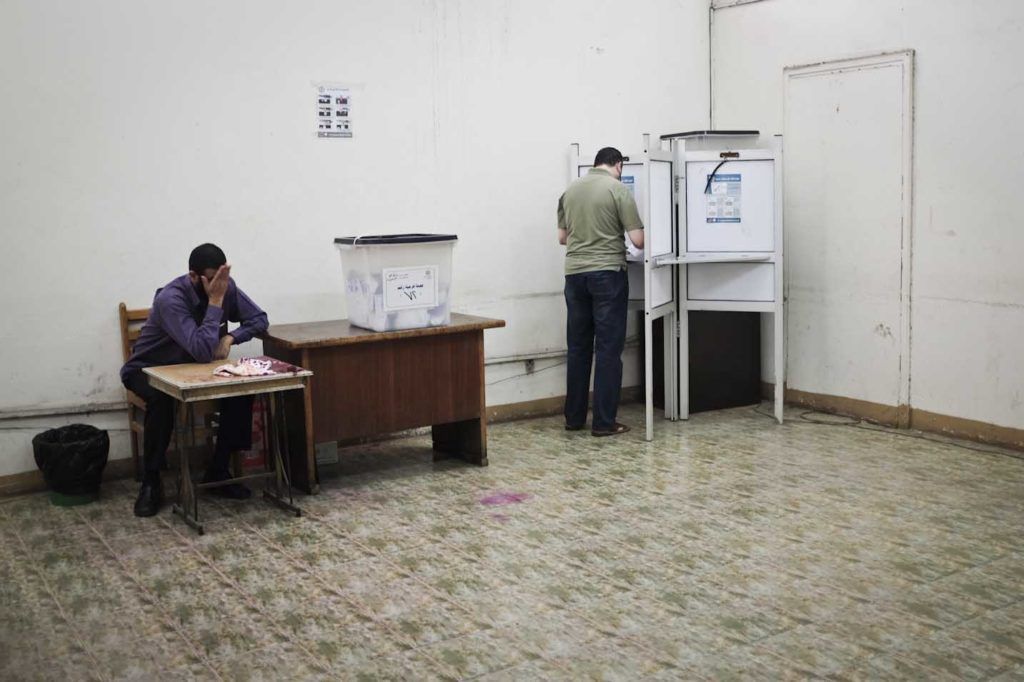 A controversial decision to extend voting in the presidential election seems to have done little besides prolong a tedious and exhausting process for judges, security and the campaigns themselves.

With a low turnout over the past two days at polling stations, the Presidential Election Commission (PEC) decided on Tuesday afternoon to extend the voting process for a third day, in what many consider an attempt to combat a lower than anticipated turnout.

Member of the PEC, Tarek Shebl, told state-owned Al-Ahram newspaper Wednesday that over 20 million people have voted so far, placing the turnout at over 40 percent — a figure contested by many.

Shebl said the turnout is a lot higher than that of the constitutional referendum, held last January, which saw a turnout of 38.6 percent.

However, Wednesday still saw a slow stream of voters, most of whom were apathetic about the whole political process. Some say the only reason they cast their ballots is to avoid an alleged LE500 fine placed on registered no-show voters.

Shebl had said on a phone-in on CBC that the PEC would enforce a LE500 on those who do not show up to vote as per the Presidential Elections Law. This, coupled with a media frenzy on the issue, prompted some to come out on the last day.

Desouk Ali voted with a friend, saying if they hadn’t extended the voting process he wouldn’t have cast his ballot because he had to work, but that he would’ve had no regrets.

“There are no elections anyway,” Ali and his friend agreed. They both affirmed that the only reason they participated was to dodge a fine that they couldn’t afford. Their votes were ultimately in favor of Sisi, who they see as most fit to govern.

Om Ahmed didn’t want to vote altogether. It was the LE500 fine that forced her to participate. “The media told us that we’d have to pay a fine and that’s why I came,” she said. “If they’re lying then may God forgive them.” Since she didn’t want to vote in the first place, Om Ahmed said she opted to invalidate her vote instead.

Sara Emad told Mada Masr she also wouldn’t have cast her ballot if voting wasn’t extended. The 21-year-old said she is not interested in politics and doesn’t understand it.

“I came because my mother told me to come,” she said, adding that she gave her vote to Sisi, but that there was no specific reason for her choice.

Security reasons also seem to have deterred some voters from participating over the originally scheduled election days.

Nagwa Abdel Aal said she had concerns about security and was also worried about standing in long queues.

When she saw that the past two days went smoothly, Abdel Aal decided to head to the polls today.

Marianne Nagy was reluctant to talk to Mada Masr after voting, citing security reasons. Despite heavy security around her, Nagy said she didn’t want to spend time around her polling station. She said she was too tired to head to the polls over the past two days, but was happy they extended the voting so she could participate.

Most police and military officers securing the polling stations expected a flow of voters following sunset, attributing the low turnout to the heat.

The only groups not deterred by the heat were passengers on trucks relentlessly driving around Cairo’s streets blaring popular song “Boshret Kheir” on their amplifiers, seemingly in a bid to encourage people to do their duty. Stopping at each polling station, the jubilant passengers hopped off to do a little dance and salute military and police officers nearby.