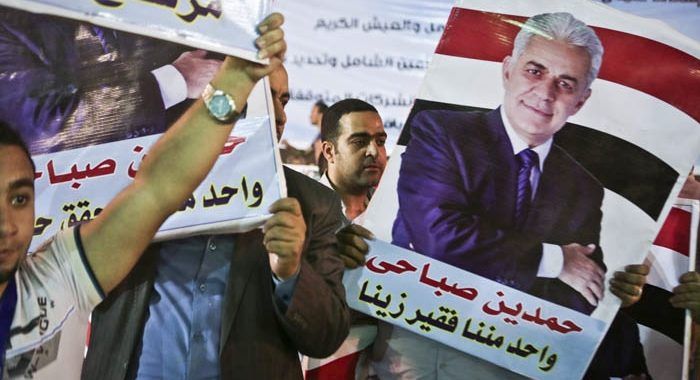 Driving up to presidential candidate Abdel Fattah al-Sisi’s campaign headquarters through the picturesque streets of the upscale fifth settlement neighborhood, we were met by a massive gate of barbed wire at the entrance to the villa where the campaign is based. Private security guards stop each car before permitting entry and two Central Security Forces trucks are parked in front of the villa for added protection.

On the other side of town, the humble headquarters of Sisi’s opponent, Hamdeen Sabbahi, is located in a small side street off Mohandiseen’s Lebanon Square. Walking up to the building, a poster bearing the face of the man himself hangs across the entrance, with a large arrow pointing right, where a porter sits directing those who are “looking for Hamdeen.”

As soon as we rang the doorbell, we were welcomed in to a small space with a couple of chairs and a wooden desk in the corner. But, despite their open-door policy, not many people were around ahead of the campaign’s first press conference on Monday, except a few journalists who had wandered in looking to interview Sabbahi voters, as they couldn’t find any outside polling stations amid the Sisi chants.

At Sabbahi’s headquarters there is as much hope as there is an overall confidence elsewhere of his loss. Even after Sisi garnered 94 percent of the overseas vote, Sabbahi was still quoted in the media saying that these results do not conclude anything and assuring his supporters of victory.

An online campaign began Monday night following reports of a low turnout on the first day of the election, titled “Tuesday is for Hamdeen.” Urging boycotters to vote for Sabbahi, the campaign considered the relatively low turnout as a sign that he has a chance.

“The campaign firmly believes that the votes of the youth who will go out today are what will settle the electoral battle,” a statement posted Monday evening on the campaign’s official Facebook page read.

The Dostour Party also participated in the “Tuesday is for Hamdeen” campaign, saying that if the youth participate they could outnumber the voters mobilized by the old regime, the Salafi Nour Party backing Sisi, and other supporters of the former field marshal. “Participate and defend your vote, your revolution, the right of your generation to exist,” a statement issued by the party said.

The Revolutionary Socialists also issued a statement titled, “Don’t let them acquire power from our weakness,” saying that the low turnout is proof that the battle is not over, as was previously believed. “This is an opportunity that arose in the middle of the battle. The camp of the counterrevolution is not as strong as it pretends to be. We have to discredit their lies that they have overwhelming support and snap out of the illusion that it is a settled battle,” the statement said, calling all supporters of the revolution to vote for Sabbahi on Tuesday.

On Monday, the official spokesperson for Sabbahi’s campaign Masoum Marzouk gathered a small number of reporters together as he illustrated the various electoral violations to which he claimed campaigners were subjected throughout the day. He added an optimistic twist to the statement by suggesting that these violations show that the state is threatened by Sabbahi’s increasing chances at a win.

There had only been three million voters so far at this point, mostly women and older citizens, according to Marzouk. He took this to mean Sisi had run out of voters and the rest would go to Sabbahi.

Speaking to Mada Masr, Marzouk said that the campaign is counting on remaining youth voters. He was confident they would not disappoint, assuming they were either waiting to vote later in the afternoon or the next day, or that those who had planned on boycotting the elections would now head to the polls to vote for Sabbahi. The idea that “the youth” en mass or “the boycotters” are not necessarily supporting Sabbahi is not one that Marzouk appears willing to entertain. He seems certain that the only thing standing in the way of more votes for Sabbahi is a lack of faith in the election rather than a lack of faith in the candidate himself.

“We are sending a message to the boycotters. Some media has tried to discourage them by saying that the elections have already been determined, but today [Monday], what we have been saying all along was made obvious by the state of panic of the opposition,” Marzouk said, speaking with a sense of conviction, driven by much hope and optimism.

As it stands, the odds are stacked against the leftist candidate, but Sabbahi’s campaign is refusing to accept this. “It is not predetermined. If anything it is predetermined for our candidate,” said Marzouk. “We don’t just want to win, we want to win by a reasonable percentage.”

Members of the Sabbahi campaign ran around the office, scrambling to record the violations against them and to release statements to their supporters. They seemed motivated more by not wanting to end up on the losing side again than by a thirst for power, in what feels like the final battle in a three-year war.

AD
You Might Have Missed
What we talk about when we talk about trees
Where do old lesbians go to die?
Carbon Colonies & A Green New Deal
Mugamma revisited: Reimagining the building and the square
AD
Passant Rabie
45 articles on Mada