Old enough not to vote
By
Passant Rabie 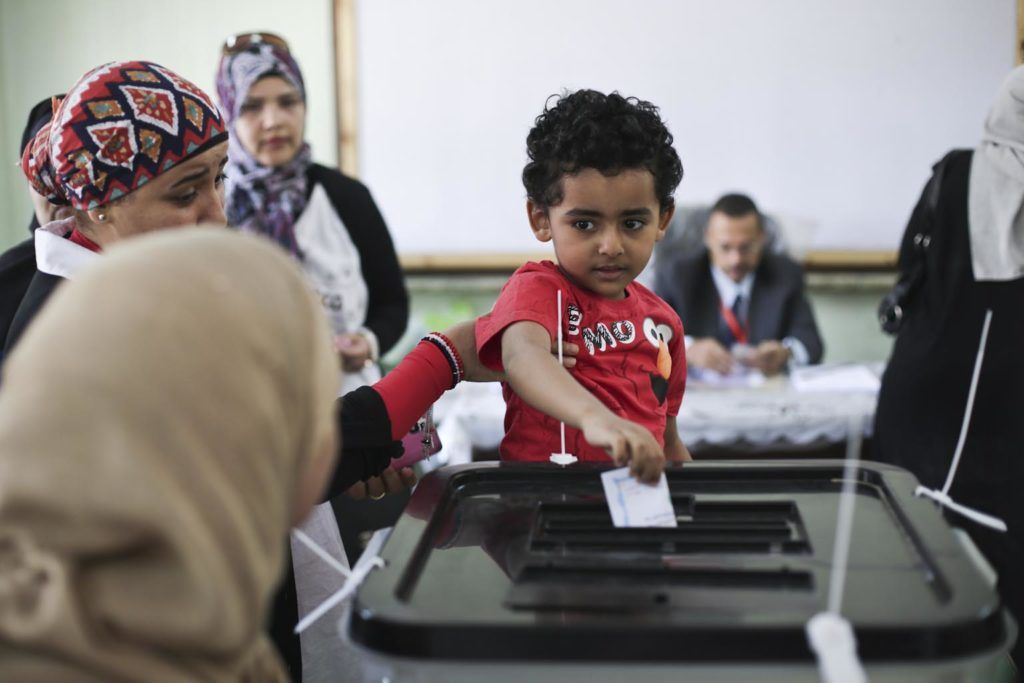 Sema Zaghloul has been a bystander during the three referendums and two elections that have taken place since the uprising on January 25, 2011. A resident of Nasr City who views the Muslim Brotherhood as extremist, she would have cast her vote for Ahmed Shafiq in the presidential elections that took place 2012. But she wasn’t of age to vote.

This year Zaghloul is finally a state-recognized adult and can take part in the upcoming presidential elections. But now the 18-year-old is not sure she wants to.

“All the times when I wasn’t eligible to vote, I had strong opinions and I wanted to vote. But this time I am not very keen because for the first time I don’t think it will make a difference,” she says.

Zaghloul is one of almost 2 million eligible first-time voters in the presidential elections taking place on May 26 and 27 between favored candidate Abdel Fattah al-Sisi and his opponent Hamdeen Sabbahi. People between 18 and 35 make up about 60 percent of voters in Egypt.

Zaghloul says that she used to be fully engaged with Egyptian politics, but she has gradually lost interest. Like a substantial portion of Egypt’s youth, Zaghloul has become jaded and doesn’t think her first vote will make a difference.

“The deal is already sealed and it’s going to be Sisi for sure,” she says.

Young people have been at the forefront of the uprisings against presidents Hosni Mubarak and Mohamed Morsi. Their sense of a lack of opportunity and a need for change was a driving force.

But despite much talk of the importance of listening to the country’s “shabab,” young people and youth groups have been given no positions of importance in the various interim governments.

In the last year, young Egyptians have particularly suffered from the government crackdown on protests. Protesters in support of the ousted and now banned Muslim Brotherhood have been met with deadly force. Many young secular activists have also been arrested. Protests on university campuses and clashes with the police have resulted in the deaths of dozens of students.

During the January 2013 constitutional referendum, observers noted a dearth of young voters. Lines at polling stations seemed to be overwhelmingly older voters who had all come out in nationalist support of Sisi, the defense minister at that time.

Ali Sherra, another first-time voter, would have voted against the constitution if he had been eligible to go to the polls earlier this year. He particularly objected to the clause allowing military trials or civilians. As is, he is going to invalidate his vote in the presidential elections.

“The regime has not changed, the regime is still around,” says Sherra, a recent high school graduate who describes himself as a political activist.

Yasmine Aboul Naga, who is sitting exams at the time of the elections, shares the same sentiment as Sherra. The 18-year-old will also invalidate her vote, she says, so that it cannot be forged in favor of a candidate.

During the presidential elections of 2012, Aboul Naga would have voted for Morsi against Shafiq since she felt, at the time, that he better represented the revolution.

But today, Aboul Naga says she sees no hope either way.

“I do think that the youth will be less engaged this time since there is no real motivation to participate,” says Nadine Sika, a professor of political science at the American University in Cairo. “Results are almost predetermined in favor of one contestant.”

Sika adds that so far there has been no clear policy to include young people in politics, and that neither contestant has presented the kind of “quick fixes” for social and economic issues that the country’s young people are mainly interested in hearing.

However, Karim al-Saqqa, a member of the youth committee for Sisi’s campaign, disagrees.

“The campaign’s main goal is to reach out to the young people,” says Saqqa, adding that they have communicated with different youth groups including workers, students and women.

“We have received great feedback from them, and they have presented us with unorthodox solutions to Egypt’s problems,” he says.

Sisi’s official campaign launched an initiative called “My Idea,” which encourages young men and women to send in their proposals to solve some of Egypt’s worst problems. They say they have received over 800 entries and given awards to the best 10 ideas. The first prize winner had put together a plan to reform pre-university education, while the second place winner dealt with agriculture and land reclamation. The third prize went to an idea related to renewable energy.

Saqqa discounts the idea that young voter turn-out has been low in Egypt as “rumors” (there are no publicly available statistics on the age of participants).

“Besides, the low turnout rate for young voters is a global phenomenon, not just in Egypt,” he adds. He also says he’s confident that young voters will turn out in large numbers for this election.

One young voter who will live up to Saqqa’s expectations is Amr Mohie, who is planning on voting for Sisi in the presidential elections.

“I don’t get involved that much in politics because I have a lot going on but as far as I know, Sisi is a strong leader and I think we need a strong person right now,” says Mohie, who mentions China as a model country developing under a strong leader.

Mohie just finished his high-school exams and is heading to Canada for university to study chemical engineering.

The 18-year-old plans on giving Sisi the first vote even though he doesn’t think the former military man really needs it.

“I feel like the election results are obvious, whether I vote or not,” he says.

According to polls, and to the results of the vote abroad, Sisi enjoys a huge lead over Sabbahi. That lead is even greater among older citizens. According to a recent poll by Baseera, an Egyptian center for public opinion research, those who plan to vote for Sisi range from 73 percent among those aged 18 to 29 years old and 78 percent among Egyptians aged 50 or above. The same poll from Baseera found that 4 percent of youth support Sabbahi as opposed to only 1 percent of people aged 50 and older.

The Sabbahi campaign is targeting young people. In a recent interview with Al-Shorouk newspaper, Sabbahi said he could count on the vote of young people who want to vote for a revolutionary candidate.

But the youth vote is split, just like the country, says Sika.

“Pro-military youth groups like Tamarod, for instance, represent youth who come from more affluent backgrounds, who prefer stability and security over democracy and the rule of law. Many non-engaged youth, those who do not participate politically or civically, would fall within this group.”

Tamarod, which has officialy endorsed Sisi, was created last year and was influential in building momentum to overthrow Morsi. Some of the group’s leaders are very close to the military.

On the other hand, according to Sika, there is the group of young people who have been active in politics for at least the last three years.

“The other youth group – whose main concern is democracy, freedom, human rights and the rule of law – as represented by the Revolutionary Socialists and the April 6 Youth Movement, will be divided into two blocks: those who will vote against the military [candidate] and those who will abstain from voting,” says the professor.

April 6’s leaders have been jailed for illegal protests, and the group, which helped topple Mubarak, was recently banned by a judge who found it guilty of espionage and defaming the state.

Mariam Hanafi has also just acquired the right to vote. But she says she probably won’t exercise it in the presidential elections, not out of political conviction, but because of apathy.

“To be honest I’m not all that involved in politics, but I’m not totally unaware of what’s going on either,” says Hanafi. Her family has encouraged her to vote for Sisi, but their arguments are irrelevant, she says.

“I’m not sure I should vote without actually being convinced, because basically, and I think I speak for most people of my age, all we know about politics is what we listen to at home or maybe at school, which are mostly opinions, not facts,” she adds.

For those who are politically engaged outside of their households, such as Sherra, it is more about making a statement.

He will go to the polling station and invalidate his vote. “I will go down and say that I do not like what is currently happening.”