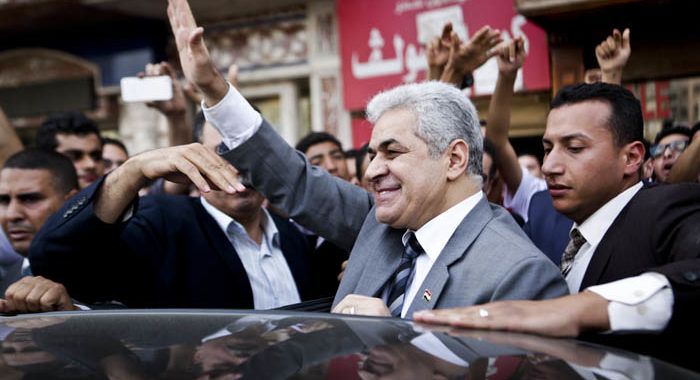 By
Lina Attalah and Ursula Lindsey

In the 2012 presidential elections, a little less than 5 million people voted for left-leaning journalist and long-time opposition figure Hamdeen Sabbahi.

As he comes back to the polls in 2014 in a politically different environment, Sabbahi retains some but not all of these votes.

He also garners new supporters. Some who plan on voting for Sabbahi this time around say their choice is based mainly on wanting to support a rival to former Field Marshal Abdel Fattah al-Sisi.

Khaled Abdel Hamed is an activist with the Revolution Front, a recently founded group standing against the crackdown on activists. He supported Abdel Moneim Abouel Fotouh as a 2012 presidential candidate, considering him closer to the revolution. Abouel Fotouh, a Muslim Brotherhood defector and founder of the moderate Islamist Strong Egypt Party, ranked fourth after Sabbahi in the polls, with some 4 million votes. Together with Sabbahi, he attracted the support of most revolutionary voices that rejected Brotherhood candidate Mohamed Morsi and the face of the Hosni Mubarak regime, Ahmed Shafiq.

Today, Abdel Hamed will vote for Sabbahi for different reasons.

“My choice of Hamdeen has to do with being against Sisi,” he says, adding that he hopes to form the biggest possible bloc of anti-Sisi voters, even though little meaning or hope is left in the ballot box.

“We cannot compare 2012 with 2014. The situations are different. Today we are not talking about a revolutionary context. Our highest hope is to stop the imprisonment of people. The counter-revolution is at its height,” Abdel Hamed says.

Besides being a rival of Sisi, Sabbahi is not Abdel Hamed’s ideal candidate, “especially with his support of the July 3 government and its crimes.” But elections for Abdel Hamed are tactical choices, chances to reverse the status quo. With Abouel Fotouh, he was hoping to break a secular-Islamist polarization, while with Sabbahi he is hoping to break military hegemony.

Akram Ismail, a member of the newly established leftist Bread and Freedom Party, is also voting for Sabbahi, a repeat of his 2012 choice. But again, he says it’s the same choice for a different reason.

“In 2012, the state was absent from the battle,” he says, explaining that even though Shafiq represented the Mubarak regime, he was supported by some state institutions independently.

“This time, we have a state candidate par excellence, with all that it represents in terms of monopolizing politics,” he says.

“All Sabbahi’s votes are counter-votes to Bonaparte and a testimony to the fact that not all of the masses are actually with him,” he adds, referring to Sisi. He explains that the votes that Sabbahi will get give legitimacy to the democratic movement, a legitimacy that was briefly associated with the January 25 revolution but is no longer present.

The idea that a counter-Sisi bloc can grow around Sabbahi has encouraged groups to support the leftist candidate. The Revolutionary Socialists group is one prominent veteran activist group that has chosen to vote for Sabbahi.

Some non-leftist groups associated with the revolution, like the centrist Dostour Party, have also opted to endorse Sabbahi, less as a leftist leader and more as a counter-candidate to Sisi.

“Egypt has been ready for a civilian president since the revolution. As a social democrat, Sabbahi is on my left. But I also don’t want Sisi to win with a 90 percent majority,” says Alfred Kemety, a leading member of the Dostour Party.

“Even if we agree that Sisi will win, the point is, what will happen afterwards? We have to imagine past this moment, especially as we have been inactive for the past nine months. I hope we come out of these elections organizationally reunited,” he explains, citing a stagnant period in which politics in Egypt has been reduced to the military’s fight with the disgruntled Brotherhood, before a silent and sometimes acquiescing audience of secular parties.

In Sabbahi’s campaign quarters, the hope is higher than just demarcating a small electoral bloc that counters Sisi’s constituency.

“No, no, no,” insists Radwaal-Darandari — who runs one of the northern Delta chapters of the Sabbahi campaign — when asked if we don’t already know the result of this election. “It’s not settled. Every day things are turned upside down.”

According to voter polls, 60 percent are between 18 and 35, says Mohamed Haiba, another Sabbahi campaign coordinator.

“I think the young people aren’t with the other side,” he adds. “I think they’re with Hamdeen. Our mission is to reach the young people who boycotted the elections,” he said earler this month, on a campaign bus on its way to a rally in Sharqiya, in the Delta.

But young voters aside, there is a strong sense that Sabbahi’s campaign is being assessed on its ability to stand up to Sisi and his military camp.

At a conference hall in Sharqiya, about 1000 supporters waited for Sabbahi to give his speech. The scene was chaotic, in marked contrast to Sisi’s tightly stage-managed appearances and intense security. When Sabbahi entered the room, many rose from their chairs and crowded the dais, trying to shake his hand. Security had to hold a small scrum back throughout the entire speech.

Two lines in Sabbahi’s Sharqiyaspeech got the biggest applause. One was when he told voters he would amend the law restricting the right to protest, issued by the military backed government last year. He named several local young men who are currently in prison — their friends and relatives waved their pictures in the audience — and promised, “The day is coming when all those imprisoned for peacefully expressing their opinion will be free.”

At another point he insisted, “The Egyptian military is not above us, above the people. The military serves the people, it doesn’t rule!”

“He is with the poor, he is one of us,” says Darandari, echoing his campaign slogan. “He has 40 years of experience in politics. And he has a program that is achievable, that’s not just air.” This argument is commonly given in response to Sisi’s reluctance to release a full program or to hold a televised debate with Sabbahi.

But for some Sabbahi sceptics, he hasn’t criticized the Sisi campaign, the military’s role since Morsi’s ouster, or the crackdown on dissidence aggressively enough. While the presidential hopeful has denounced the crackdown on activists, he hasn’t objected to the repression of the Muslim Brotherhood and more specifically the deadly dispersal of their sit-ins last August.

In an interview on ONtv, Sabbahi said, “I was with the decision to end the sit-ins, which was by popular demand. But all the blood spilled in Rabea pained me, regardless of whose blood it was.”

A statement from the Revolutionary Left slams the option of voting for Sabbahi, calling the current elections yet another round of “regressive polarization.”

The statement calls Sabbahi an “ally to the military junta” during its battle against Brotherhood rule and says he “started his campaign and entered the battle with flags down and empty slogans.” For this group, even a tactical vote is useless.

However, a leading member in the Sabbahi campaign, speaking on condition of anonymity, told Mada Masr that Sabbahi stepped up his rhetoric against the military over time.

“We started off with a calm and balanced discourse and with time, we escalated. In the end, we shifted to attacking the rival candidate,” he explained. “The more we had conversations with groups supporting us, the more we escalated our rhetoric against our rivals.”

But “we can’t be attacking all the time and from day one. The slogan ‘down with the military’ works in protests, but not in electoral battles,” he said.

Unlike many Sabbahi voters, Ismail has fewer reservations about his candidate.

“He is a conservative leftist. He changes his position. He maneuvers. He is a politician. But we saw him imprisoned, defending the rights of farmers. We saw him being beaten up at protests defending the independence of the judiciary,” he says.

Ultimately, though, the person doesn’t matter.

“The historic moment is what shapes the battle,” concludes Ismail.