Sisi posters and the politics of patronage 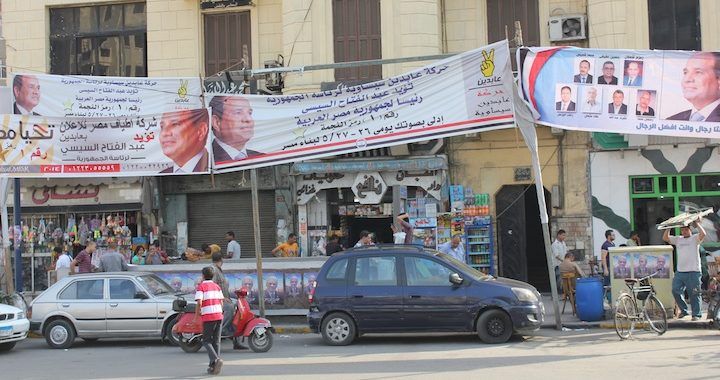 Electoral campaign posters for former Field Marshal Abdel Fattah al-Sisi are abundant in every Egyptian town and city. Unprecedented in its size and scale, this electoral campaign is arguably the largest promotion of a political candidate in the country’s history.

Thus far, the cost of Sisi’s electoral campaign is officially reported to be LE12 million, although there are speculations that it is closer to the LE20 million maximum limit on expenditures. This year the High Elections Council doubled the campaign expenditure allowed by law during the 2012 presidential elections. This official figure of LE12 million may well be understated as many private campaigners have joined in to promote the former defense minister’s bid for the presidency.

In Cairo, Sisi posters can be found on just about every lamp post on the Sixth of October Bridge, which spans the city from north to south. Several massive billboards promoting Sisi are also unavoidable along this lengthy bridge. His official campaign posters feature images of the former military chief grinning while dressed in suit and tie, along with his campaign slogan, “Long live Egypt.”

Many of these posters have been defaced with the word “deddak” (against you) spray-painted across them, or spattered with red paint to give Sisi a blood-soaked image, and others have been torn down.

But still, Sisi posters have survived such attempts and can be found on every street. Whether part of his official campaign, or private promotions, the face of the 59-year-old, who is set to be elected, is omnipresent around Egypt.

Private promotional posters — that are not directly linked to his official campaign — feature Sisi usually dressed in his military uniform. These posters and banners hang outside an untold number of stores and businesses in Cairo, often with a message of endorsement from owners, along with the name of the store or company and sometimes even their contact information.

Yet is all this campaigning and are all these posters necessary for a candidate who is already poised to win the election?

“I think it’s necessary from the campaigners’ perspective,” said Mohamed Menza, a specialist researcher of patronage politics, and professor of political sociology at the American University in Cairo.

“The main objective here is to have a very big show of popular support. Campaigners are seeking to promote participation and encourage the highest voter turnout rate possible, with the aim of exceeding the numbers of those who showed up during this year’s constitutional referendum,” he said.

The 2014 referendum held in January boasted a turnout rate of just over 38 percent, with a 98 percent approval rate. Sisi and his campaigners are apparently seeking to gain higher voter turnout rates than those cast for Mohamed Morsi in 2012.

In terms of promoting their candidate, Sisi’s campaigners “are likely to achieve their objective. It is not only about winning the election, but maximizing voter participation and winning it by a landslide,” said Menza.

The professor pointed out that the campaign teams of former presidential candidates Ahmed Shafiq (Hosni Mubarak’s last prime minister) and Amr Moussa (Mubarak’s former foreign minister) are directly assisting Sisi in his presidential campaign.  “There are lots of individuals from among the middle ranking members of Mubarak’s now defunct National Democratic Party helping to finance the Sisi campaign. Plus there is a lot of personal assistance from businessmen who were closely linked to Mubarak’s party,” he said.

The professor explained that there are several businessmen who sought the patronage of Mubarak and his party, followed by that of Morsi and his Muslim Brotherhood, and are now seeking Sisi’s support.

According to Menza, these businessmen, “notables and lesser notables” have been campaigning for Sisi across the country by organizing popular conferences, neighborhood-based campaigns, and are preparing to mobilize their constituents en masse for Sisi.

Beyond Mubarak’s patronage networks, a wide spectrum of political parties are also mobilizing their constituencies to vote for Sisi. Across Cairo, the liberal Wafd Party, the Free Egyptians Party, the ultraconservative Salafi Nour Party and the left-of-center Tagammu Party have all hung-up posters and banners announcing their support for the former field marshal.

Smaller and more obscure parties, including: the Guardians of the Revolution Party, the Egyptian National Movement Party, and the Egyptian Party also hung up Sisi posters, as has the Tamarod movement in Cairo.

From May to June 2013, Tamarod’s popular petition campaign was instrumental in mobilizing millions of Egyptians against the presidency of Morsi. While Tamarod has condemned the Morsi regime for its power grabs and human rights violations, the movement has not questioned Sisi’s human rights record.

Tamarod has repeatedly called on the populace to protest in solidarity with Sisi to show the world — particularly the US, from which Egypt receives billions of dollars worth of military aid — that Morsi’s removal at the hands of the Armed Forces was not a military coup, but a popular revolution.

Within Tamarod, several supporters of the only other presidential contender, Hamdeen Sabbahi, have reportedly been expelled from the movement for not siding with Sisi.

“People are afraid to support Sabbahi in public, against the sure-winner,” said Menza. “The masses are generally not open to the idea of challenging Sisi, and no businessman is going to invest in abstract struggles, without clear benefits in front of him.”

Indeed, during the presidential elections of 2012 there were 13 candidates running for president, while in 2014 only one candidate is challenging Sisi.

“Businessmen are seeking a piece of the pie,” he added. They may be seeking political favors, tax breaks, or parliamentary seats.

Politicians and businessmen will continue to support the campaigns around Sisi, especially “given that there is no real ruling party at the moment.” Others are simply hoping for stability, benefits, and the prosperity that comes from a strongman patron-leader.

According to Essam Abdel Aziz, vice president of the Tour Guides Syndicate and a businessman in the tourism industry, “Stability will be guaranteed, and the security situation will improve” under Sisi.

“Tourism is among the Field Marshal’s foremost priorities. He has told us so himself.”

Abel Aziz continued: “Since the revolution the country’s tourism industry has been hit hard. Most visitors have been frightened away by the unrest and terrorism over the past three years.”

The owner of a hot-air balloon service in Hurghada, and a travel agency in Cairo, Abdel Aziz explained that instability has resulted in tens of billions of dollars worth of losses incurred in the tourism industry, while some four million employees in this industry have either lost their jobs, or are threatened with joblessness.

“Hundreds of hotels are empty, or have shut down. While most cruise boats remain docked and out of business.” Likewise, his hot-air balloons are grounded with very little demand.

Abdel Aziz commented that he hopes that the tourism industry will return to generate its estimated $US13 billion of annual revenue (prior to the 2011 uprising against Mubarak) when Sisi officially takes over Egypt’s reins.

“Sisi has promised us that he would revive the tourist industry over the next few years, and together we aspire to increase both our revenue and our total number of visitors — from the 2010 figure of 14.7 million visitors, by several million more.” Only around nine million tourists have annually visited Egypt since 2011.

“(Former President) Morsi had promised us that he would help us restore this vital industry, but did not care much about it.”

The businessman did not mention that armed Islamist groups have dramatically increased their terror attacks nationwide since Sisi’s ouster of Morsi in July 2013.

“Stability and security are urgently needed to get our industry and our national economy back on its feet,” concluded Abdel Aziz.

According to Sheikh Abdel Rahman Hassan of the Islamic Jurisprudence Center, “We are campaigning for Field Marshal Sisi’s presidency because he is a pious and religious man. Moreover, we trust that he will be able to root out terrorist groups like Ansar Beit al-Maqdes, Ajnad Misr, the Muslim Brotherhood, Hamas, and other armed extremists.”

Sheikh Hassan’s center has a number of posters around Tahrir Square with the image of Sisi and the words, “May I kiss your head please?” The center’s phone number is on these posters identifying them.

Similarly the private ETAF advertising company has hung-up Sisi banners around the Abdeen neighborhood, with the name of their company, and their phone numbers on them.

The company’s spokesman did not comment as to how much his eight-foot-long banners cost or why they have the company’s contact information on them.

Mohamed Lotfy, owner of a bookshop in downtown Cairo commented, “These [private] banners hanging outside our shop are not ours. They belong to other businesses and political parties in the area.”

“Nobody forces these businesses to put up campaign banners. They put them up out of their own freewill. It’s their way of showing their support for their candidate, and their love for their country.”

However, in Cairo no businessmen or companies can be seen promoting Sabbahi’s presidential bid. The number and size of his posters and banners pales in comparison to those of Sisi.

The only two parties openly backing Sabbahi on these posters in Cairo are the Popular Socialist Alliance Party and the Karama (Dignity) Party, from which Sabbahi hails.

While hundreds of young people can be seen wearing Sabbahi t-shirts, distributing his campaign fliers to passers by, holding small scale conferences, forming human chains, and flying campaign kites from bridges along the Nile, these efforts are very clearly dwarfed by the massive campaign machine behind Sisi.