Songs for voting to 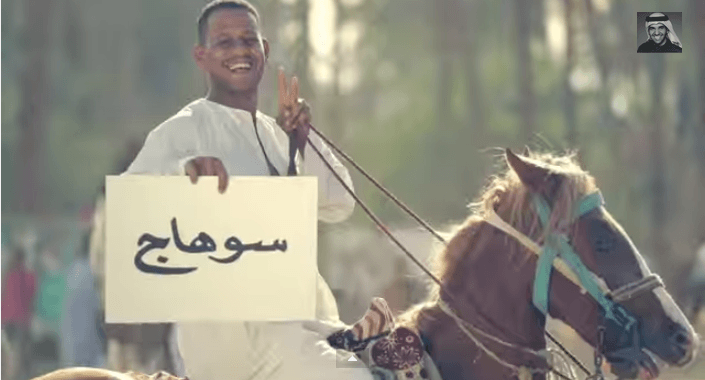 By
Jenifer Evans and Andeel

Andeel: This is Boshret Kheir [A Good Omen], the song that came out a few days ago to ask people to vote in the election, and went all over the Internet.

A: This is only one upload. It’s by Hussein al-Jasmi, who is an Emirati singer who has been singing recently for Egypt a lot, which is quite embarrassing.

A: Because it feels like aid. The Gulf aid that they’re giving. It’s ironic, because this guy has made songs before for Qatar.

A: The music is by Amr Mostafa, that music composer who is so pro-Mubarak. Remember?

A: He made lots of songs supporting Mubarak during the Mubarak time, and after the revolution was so anti-revolution. He’s the guy that says everything is Masonic and everything contains hidden messages. People started calling each other “Amr” when they’re supportive of the government.

A: Can you feel the military drum roll in the background?

JE: It’s a snare drum … This song is like that Pharrell Williams song Happy.

JE: There are lots of Egyptians in the video, and they are looking happy, dancing and holding up signs.

A: They say “vote” and the names of cities. “Vote,” “contribute,” “your vote makes a difference,” stuff like that.

JE: Do you think they’re trying to show Egypt as they think people want it to be like? It’s kind of a weird version of Egypt.

A: Not really. It’s very realistic, I have to say.

A: Yeah, it’s Egypt when people are happy. The Happy song is all about hipsters and consumerism and looking good, all of that. So it’s like that but in the context of voting for Sisi.

JE: But it’s not very hipstery.

A: Yeah, so this one is trying to be different by having people who obviously look poor. But at the same time it doesn’t fall into the trap of portraying Egypt as a fantasy place, like in [Mubarak’s] National Democratic Party ads, where everybody is very glorious. It’s more realistic and less fake than those ads, the usual presidential campaign ads, where the farmers are very iconic and workers are very muscley. So in that sense this one is much more realistic. I think that’s why a lot of people didn’t hate it. Like this [beach scene] — you wouldn’t put that in an ad.

JE: You would, but not in an ad in Egypt.

A: Yes, not in an Egyptian ad.

JE: How do you think they got people to look so happy?

A: Really? Your taste has gone downhill.

A: This one wants to take over the position of Tislam al-Ayady, be an alternative to it. People have made a lot of parody versions of this one, their own versions. It’s not a very bad song, Jenifer.

A: It’s not a great song, but it’s jolly. In the remakes, people are just putting it to film scenes where people are dancing.

JE: What movie is this one from?

JE: So they’ve just taken a scene from a film and put the song on top of it?

JE: Why are people doing that?

A: The joke is in the sudden, abrupt dancing that seems a bit irresponsible and kind of goofy.

JE: What’s the point? It’s like highlighting how silly it is?

A: Yeah. This is not the best one.

JE: Is this it? The point is just that they don’t react?

A: No! “Khadt ey Masr biskootak?” [What did Egypt earn from your silence?]. Egypt wants a biscuit! [Giggles.] That sums up the whole way Sisi and the army are treating the country! Like a little child …

JE: What a joke. What do you want to watch now?

A: The Muslim Brotherhood one.

JK: This video is so horrible, it’s so dumb. The Brotherhood are so bad at being in the opposition.

JE: What did he just say there [in the song]?

A: He said that Sisi is a prophet, and very kind and he didn’t kill anybody, and for the sake of the opposite of sectarian strife — what’s that called? — communal harmony, he will pray on Friday and Sunday. As soon as the Brotherhood start hating the Christians, I feel really disgusted.

JE: So basically they’re just trying to say that Sisi’s willing to be Christian, that’s how bad he is?

JE: That’s not very cool. Did the Brotherhood produce this video?

A: It’s by “the Official Page for Makamaleen Channel.”

JE: How do you know it’s Brotherhood? I mean I know it’s got the Rabea sign [the four-fingered hand commemorating the bloody dispersal of pro-Mohamed Morsi sit-ins on August 14, 2013] on it … But how do you know? It could be someone pretending to be them. They’ve only got 641,000 views.

A: I know it’s them because they didn’t say the word “ars” [pimp] in the video clip.

JE: Why do you think they chose the Gangnam Style song to copy?

A: Because it’s popular and the “cool” kids will like it. This was made more than a year ago though.

JE: This video? How embarrassing!

JK: Where are they in the video, in Egypt?

JK: They’re wealthy, the people who made this video. It’s a very nice garden.

A: No, it looks like any public garden in any governorate.

JE: So the whole thing about this video is the lyrics, which are making fun of Sisi. The rest of it is just so that people will watch it and think they’re cool.

JE: It’s not like the dance is making fun of Sisi?

A: Ah! I think they chose this dance because it looks like you’re riding a horse, and the Brotherhood’s highest point of making fun of Sisi is making fun of his name.

JK: On IkhwanOnline, they advertised it as making fun of the way Sisi dresses, his high trousers.

JK: You can also look at the [Salafi] Nour Party video that they made for Sisi.

A: I think it’s been removed, or deliberately hidden. I can’t find it. One of the ways you can know if a song is by the Brotherhood is if the title says “sooooooo funny” — “maskharaaaaaaaa.”

A: I don’t think it’s interesting.

JK: It’s annoying when people always feel like they have to compare democracy-related things to America.

A: We can just write about the Egyptian ones, about the differences between Boshret Kheir and Tislam al-Ayady, and the way Boshret Kheir is very self-conscious in terms of class, and how it’s trying to get into the position of Tislam al-Ayady and make people forget that the military — that July 3 was all about “ghowghaa,” masses of people behaving insanely. Anyway, Tislam al-Ayady was criticized for having very low standards, being very shaaby, and that was very classist.

A: By lots of people from the upper class, from the middle class. “Ay il araf da?” [What is this disgustingness?]

JK: What about the mowadeen Sisi [Sisi supporters]?

A: The mowadeen Sisi had to accept it, because it meant a political thing at that time, but afterwards everyone was like “this is a very awful song.” But “Boshret Kheir” is now replacing it —

JK: You’re not going to talk about the Hamdeen Sabbahi song?

JE: So Hamdeen has his own song as well?

A: It wasn’t as famous as Ahmed Shafiq’s song, which was put to the same music as Sabaa w Nus. You remember the Sabaa w Nus song?

JE: Can they just steal a song?

A: It was the same singer, Essam Shabaan.

JE: So he just said, you can have this?

JE: So what did they change the lyrics to?

JE: This is an older song for Sisi by Hussein al-Jasmi, who made Boshret Kheir?

A: Yes, made in October last year in the Air Defense stadium.

JE: How do you know it’s about Sisi?

A: He’s sitting right there. That’s his wife.

A: It’s saying “Mr. Citizen.” It’s a bit tricky — these songs are always trying to do that — be about him, but at the same time it could work for anybody. So this song is addressing the son of Egypt, the hero who has to respond when Egypt is demanding him.

JE: So it doesn’t use his name.

A: No. If you talked to the writer, he’d say, “Well, I just meant any Egyptian.”

JE: And Sisi is using it in his TV campaign ad. Who do you think all those dancers are?

A: Because during Mubarak’s time there used to be these meaningless, very ugly celebrations with lots of people dancing badly. I’ll be very sad when I remember these things when I’m older. I wonder who choreographed this one and what it might mean, what kind of messages are in it.

JE: What do you mean?

A: Like when the Brotherhood was very happy, they went to the stadium and kept chanting very Islamist things, and when this guy’s happy he just wants people to know that this is Egyptian identity.

JE: Like what — young people dancing in colorful costumes?

Topics
Related
100Copies
Band of the week: Islam Chipsy
Maha ElNabawi | Islam Chipsy is the star. If you’ve ever seen him in action, it’s not hard to understand why.
Ahmed Fouad Negm
From nationalism to resistance and back again
Sarah Carr | If there is one song that in years to come will immediately conjure up the heady days of June 30, 2013
Amr 7a7a
You just got mahraganed
Andeel | It’s going to be difficult for you to like mahraganat if you’re the kind of person who asks the waiter
Abdel Halim Hafez
Egypt’s musical nationalism, and a little George Orwell
Maha ElNabawi | Nationalism in Egypt is nothing new. But its current resurgence in the country’s cultural output would