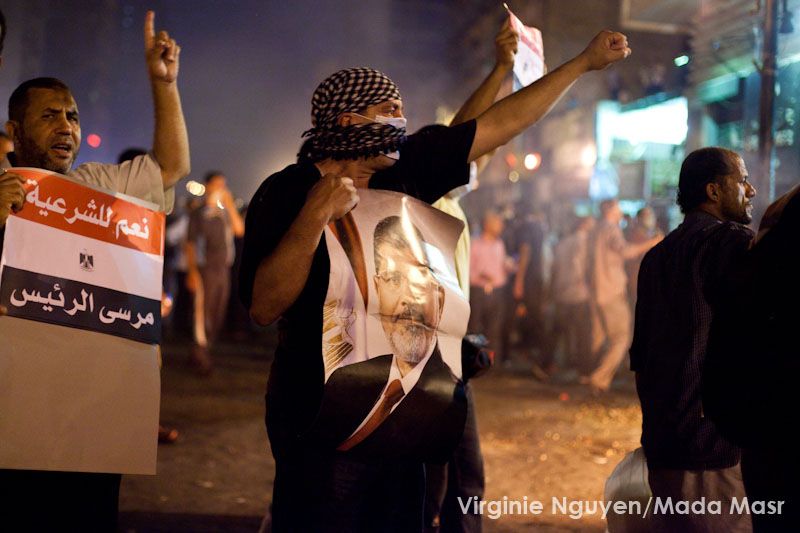 A police official accused leaders of the deposed Muslim Brotherhood organization and its Palestinian branch Hamas, as well as the Lebanese Hezbollah militant group, of organizing a plot to open the prisons and cause chaos during the January 25 revolution, the official Middle East News Agency (MENA) reported.

General Adel Azab, who heads the department that monitors the activities of the banned Islamist group for Homeland Security, testified in front of the Cairo Criminal Court in a case in which ousted President Mohamed Morsi and other Brotherhood leaders face charges of escaping from Wadi al-Natrun prison on January 28, 2011.

The police officer reiterated rhetoric used by state media and supporters of Mubarak’s regime, that prison escapes and the burning of police stations during the revolution were part of a plot by the Brotherhood to take power.

Azab said that the Wadi al-Natrun prison escape coincided with similar attacks on two prisons, as well as other allegedly coordinated attacks on police stations across the country.

The inmates faked a fire inside the prison, Azab testified, in order to facilitate the attack, by providing an opportunity for armed attackers from outside the prison to finish their mission.

State security at the time received an alert alleging the prison was on fire, forcing them to send a police officer to investigate the incident, given the importance of the prison, in which 34 members of the ousted organization were kept following arrest warrants issued by former Interior Minister Habib al-Adly.

The officer then allegedly contacted a member of the Muslim Brotherhood group, who confirmed, “All the Brothers are freed.” Azab claimed that the officer knew the prison had been allegedly attacked by armed Bedouin assailants, Hamas and Hezbollah members.

State security investigation records referred to an alleged meeting between Hamas and Brotherhood members in Turkey before January 25, stipulating that there would be coordination between the two movements once a popular revolt or a wave of change occurred in Egypt, Azab explained.