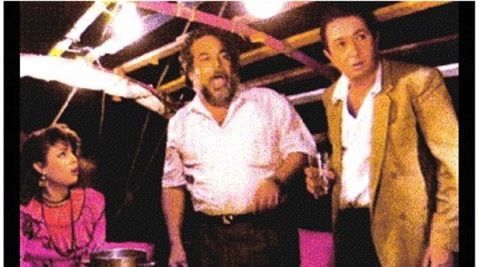 I love eccentric movies; sometimes they possess a certain pleasurable eeriness that leaves you baffled, unsatisfied and intrigued.

Youssef Kamal (Nour al-Sherif), an ordinary 40-year-old, wakes up in a rush thinking he’s late for work, only to realize that his alarm didn’t play a trick on him: it’s a holiday. With a whiff of exhilaration, he decides to spend the day out. Like a child in an amusement park, he embarks on a journey around the city during which he unexpectedly meets newness and excitement in the person of Sayed Marzouk, a businessman who lures our protagonist into a world of fantasy and temptation.

Through an outlandish trip between ancient tombs, the desert, a sauna and a police station, Youssef Kamal gets hooked, mesmerized by the world of Marzouk. Only a few hours into this manic friendship, hypnotized, he says, “I love Sayed Marzouk … I want Sayed Marzouk.” His weird inexplicable trip with Marzouk, who is always accompanied with a band of three musicians and a young singer called Fifi Suhag, continues between feluccas, a floating restaurant called the Nile Pharoah, a rendezvous with a prostitute and a police raid in old Cairo, during which Kamal is injured and returns home, only to find Marzouk and his band enticing him again with a LE150,000 vintage Mercedes as a birthday present.

“Sayed Marzouk is a world you cannot exit easily,” says Omar the policeman to Kamal, who becomes submissive and accepts the insanity with ease and contentment, until Marzouk hits Abdallah Chaplin, a street performer dressed as Charlie Chaplin, with his car and accuses Kamal of doing it.

In this avalanche of events and people, Kamal’s link to reality thins, as does that of the viewer, who wonders whether Kamal is dreaming. Did he really wake up this morning? Is he mentally deranged? The movie feels like an Egyptian version of Alice in Wonderland, in which the Alice/Kamal figure keeps popping pills and bumping into the rabbit, in this case Marzouk.

We learn that Kamal had become agoraphobic shortly after his participation in a protest in the 1970s, probably the student uprising of 1972, when he met a tall and frightening man in a coat who ordered him to go home and stay there. Which he did, until Marzouk shows him “life” in one day. Like most of Daoud’s characters, Kamal is socially impaired, a loner who drifts around life helplessly.

In the craftily woven scenario, which Abdel Sayed also wrote, the characters are given meaningful names: “Kamal” implies a search for perfection through “Sayed,” the master who possesses money, “Marzouk.” “Mona,” a mysterious young woman that Kamal meets during the same morning, and who keeps reappearing on his path, represents Kamal’s longing for love, which he cannot fulfil. Suleiman al-Hakim (Suleiman the Sage), the chemist who invents an incubator for his newborn out of need, and Abdallah Chaplin – “Abdallah” meaning slave of God – is the commoner. (This name trick is reminiscent of Naguib Mahfouz’s famous trilogy.)

With this unrealistic fantasia, Daoud takes Egyptian neo-realism, a cinematic approach, of which he was one of the pioneers – along with Tayeb, Sherif Arafa, Salah Abou Seif, Saeed Marzouk, Mohamed Khan and Khairy Beshara – to another dimension. Like the other movies in this movement, Searching for Sayed Marzouk was produced in an era when commercial cinema (“aflam meqawalat”) had dominated the scene since the early 1980s, and it bravely tackles issues such as social justice and freedom, while indirectly lashing out at Sadat’s open-door (“infatah”) policy that finished off the remains of communism in Egypt. Like these other films, it was also shot largely on location.

From the opening scenes, Abdel Sayed puts his viewers in a trance-like state. Everything makes sense and doesn’t at the same time. It’s a surrealistic dream that depicts the most intricate details of Egypt in the early 1990s, including the powerful police officer, the corrupt businessman, the passive middle-class man and the street performer who struggles to make a living by bribing conscripts to stay out of his way.

Kamal fights for his newly found freedom after years of hiding. He flees from the authorities, ends up in a dumpster, cheats death, attempts to kill Marzouk. He chooses a life of freedom where those sturdy army boots and their sniffing dogs will follow him forever. He chooses a life of freedom and he pays the price. Searching for Sayed Marzouk won the Silver Pyramid at the Cairo International Film Festival in 1991, but it failed commercially after only two weeks in theaters. 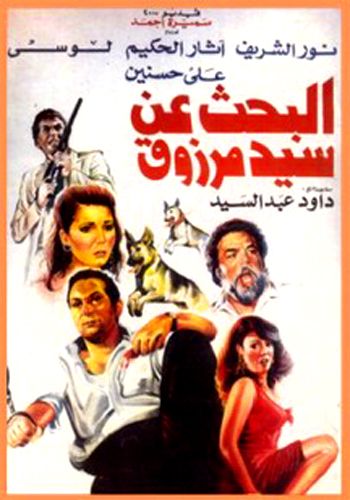 AD
You Might Have Missed
Where do old lesbians go to die?
Mugamma revisited: Reimagining the building and the square
What we talk about when we talk about trees
Carbon Colonies & A Green New Deal
AD
Amany Ali Shawky
89 articles on Mada