Hiccups and energy: Looking back at this year’s D-CAF music

Figo at D-CAF
By
Maha ElNabawi

The third annual Downtown Contemporary Arts Festival (D-CAF) in Cairo was a manic month of running to catch cultural events. By the end of the music program I felt as though I was on loop: entering Shaharazade night club through a semi-pushy, haggling mob as the door sold out, buying room-temperature Stellas, dancing wildly for hours, leaving, laughing at the comically large Sisi poster off Alfy Street and jumping into a taxi, only to repeat the cycle again.

Shaharazade became a space that gathered the hodgepodge of youth living in Cairo in our socially and politically befuddled time. You could find people there from all over: Imbaba, Maadi, Zamalek, Sallam City, Bristol, New York, Berlin. Entrance was 30LE (about the same as popular Zamalek music venue Sawy Culture Wheel, or an average movie theater), so middle-to-upper-middle class Cairo kids dominated, and the capacity of 300-400 sold out most nights, indicating a well-received selection — and time for a bigger space.

But there’s something special about experiencing contemporary, often very electronic live music sets in an early 20th century cabaret hall with wonderfully high ceilings, time-abused wine-colored carpets and wrinkly walls that must have a lot to say considering the decades of history they’ve witnessed. Shaharazade is a time warp, but the music and audience point at something progressive and exciting.

This program kicked off with a massive bang in the form of Dutch band Skip & Die, whose videos led me to entirely underestimate them. Despite an unfortunate opening song, which attempted to set an oriental mood by means of a misplaced sitar, their live show set the bar pretty high for everything to follow. It was a glittery in-your-face riotous soundscape of dubstep, folk, Rai, hip-hop and electronica, all performed by a drummer, a guitarist and a mesmerizing front woman, South African vocalist Catarina Aimee Dahms.

After the room was officially warmed up, and more than a bit smelly from all the leaking body odor, Islam Chipsy took the stage alongside drummers Eslam and Khaled with their explosive project EEK. Chipsy is a keyboard virtuoso from Imbaba who makes people dance wildly to his rapid keystrokes. After 30 minutes I found myself a bit confounded, over-stimulated by the looping video game bleeps and bloops. I left early: with Chipsy, you’ve got to be in the right mood.

For shaabi or maharaganat fans, the March 27 Cairo Calling night was the best all-round line-up. Bringing together local mahraganat with London dubstep and grime, the collaboration between Rinse FM and 100Copies was a smash hit. Figo, Sadat, Alaa Fifty, Diesel and KNKA performed alongside foreign counterparts Faze Miyake, Mumdance and Pinch.

Figo, mahraganat pioneer with his self-organized 2008 festival “Mahragan al-Sallam” and breakthrough track “Ana Baba Yalla” (2011), was sadly something of a flop in his live show. It wasn’t so much that he was off, but there was a disconnect with his backup singers and something was terribly drab about the music — it all felt a bit too 2012. Diesel and KNKA of Madfagaaya were great though — their showmanship and progressive house music embellishments alongside shaabi timbres had the dance floor shaking.

But Sadat and Alaa Fifty stole the show. They were arguably the best act in the program, in fact. London-based DJ and producer Faze Miyake laid down some deep-hitting, slow and lugubrious grime and dubstep beats to set up one of the coolest additions to mahraganat since the genre began. It didn’t make their sound more “western” — shaabi timbres and textures were present throughout the set — but it gave them a powerful punching platform from which to jump, dance and rap off each other with a beautiful synergy. Sadat and Fifty have an unparalleled chemistry and know exactly how to command a stage. 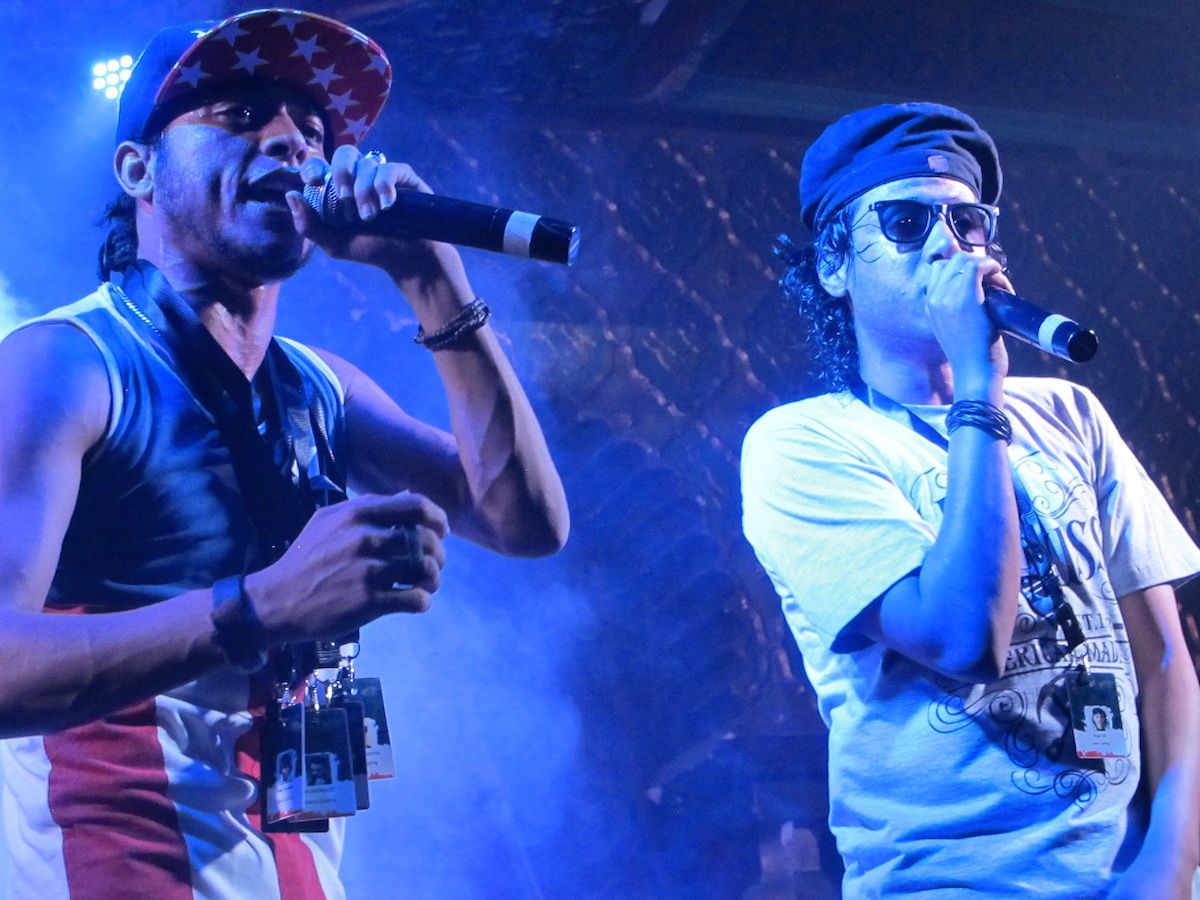 Opening up the “Middle East focus” on the April 3 section of the program was American alt-rapper One Be Lo. This was one of the hiccups in the selection. Why was an American rapper opening the Middle East part? Maybe I’m missing something. His performance was mediocre at best, although he sounds much better on recordings than live, with his old-school 1990s rap, break-beats and smooth sampling. But I felt like One Be Lo was yelling at me, sometimes alternating between two mics for extra emphasis.

Egyptian five-man band El Manzouma fortunately put on a stellar show. The sound was excellent, and it’s always pretty incredible to watch Aly Talibab take hold of a room the way he does. He falls to his knees at times and bows his head, often holding a cigarette in one hand and mic in the other. And PanStarr’s Youssef Abouzeid never ceases to impress me — he makes his guitars and pedals blur into the background, fading in and out with amorphous melodies and fuzzed-out guitar riffs.

Wrapping up both the Middle East focus and the entire music program was Egyptian singer Fayrouz Karawya and producer Ismail Hosny, followed by festival headliner Yasmine Hamdan at the Qasr al-Nile Theater, another incredible space — although more effort could have been put into making the women’s restrooms functional (no running water or toilet paper).

First came a painful performance by Karawya and Hosny, who seemed to be sharing the stage for two completely separate acts. The collaboration was orchestrated by Mahmoud Refat of 100 Copies music space and record label and was three or four months in the making. Refat was no doubt trying to find a suitable opener for Hamdan’s folk-tronic, cross-tempo, big-production oeuvre, but onstage it was a disaster. I don’t mind the idea of combining the two artists, and I don’t think all hope is lost for the collaboration, but structurally something needs to change. Perhaps more pop-friendly arrangements would give Karawya less room to over-articulate but enough space for a catchy chorus the audience could engage with.

Hamdan was a great pick for the final act. Despite a crowd that seemed to go rabid toward the end, the performance had a true concert feel, with hundreds singing along and dancing to Hamdan’s alternating Arabic dialects and the big-band sound of her three supporting musicians.

Curated, as in D-CAF’s other two years, by Refat, this year’s music program had some hiccups and failings, but it also included several successes and inspiring displays of how intuitive selection and musical energy can create a direly needed cultural contact zone for otherwise segregated Egyptian audiences.

When the festival started in 2012, Refat’s programming was more of a crapshoot. Around 30 performers were booked, and music events took place almost every night at the Radio Theater. The range was broad, from Grammy-winning experimental jazzman Fathy Salama and French electronic jazz band Erik Truffaz Trio all the way to the experimental electronic music of Kareem Lotfy and the mahraganat of Okka and Ortega, with all sorts of local and regional acts in between. While the number of events was perhaps too ambitious, and the selection slightly overwhelming, this range attracted a wider audience than the “urban music” focus of the past two D-CAFs.

In 2013, D-CAF’s whole program tightened up and became less heterogeneous. This was both good and bad. Memorable musical moments included Sadat, Dina El Weddidi, and a Berlin DJ named Beytone.

This year sound also played an important role in D-CAF outside Refat’s program. Hassan Khan’s video installation, “Jewel” (2012), installed in the Kodak passageway, is a stunning and contagious sonic and visual interpretation of how the human body receives and reacts to sounds and how each person’s movements tell their history. In theater, sound was central in certain — party or massacre — scenes of “Violence Lontaine.” At times there was very violent usage of white noise, and other times we could hear nothing but sweat falling off Delavallet Bidiefono, perhaps the most captivating of the three performers. The French/Egyptian music and dance collaboration La Voix est libre also received rave reviews.

It could be nice to see more women in next year’s music program. And to add a midweek night showcasing some of the broader range of musicians found in the inaugural D-CAF — jazz, experimental electronic and folk, rather than the safer bet of urban and dance music.

Last year and this year two Syrian performers were put on the bill for the music program, but on both occasions D-CAF did not manage to get the paperwork done in time to get the visas. Many were especially disappointed this year by the cancelation of the Hello Psychaleppo show.

But this past month had some much-needed stellar live shows. Nothing started on time, but the selection, sound and production of the music sets were pretty decent, clear and a notch better than last year’s. There were also some takeaways: local bands might be prompted to beef up their instrumentation, for example — with the exception of Sadat and Fifty, the acts with more live instrument (guitars, drums, keys, synth) were the biggest hits: Skip & Die, Islam Chipsy, El Manzouma and Hamdan. Despite the hiccups, Refat and D-CAF managed to create an environment that merged cultures and different walks of Egyptian life under one weathered roof.

AD
You Might Have Missed
What we talk about when we talk about trees
Mugamma revisited: Reimagining the building and the square
Where do old lesbians go to die?
Carbon Colonies & A Green New Deal
AD
Maha ElNabawi
89 articles on Mada