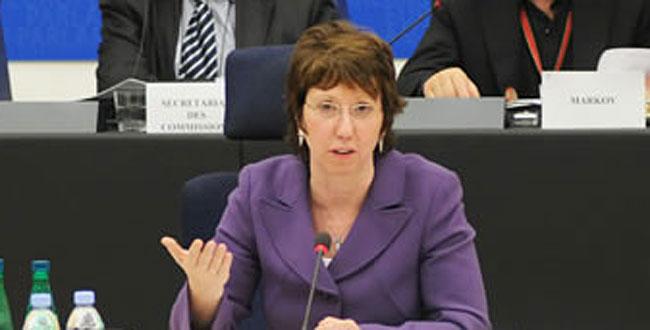 The European Union’s foreign policy chief Catherine Ashton voiced support for former Defense Minister Abdel Fattah al-Sisi’s bid for the presidency in a meeting Thursday evening, telling him that she understood his bid for the presidency was motivated by a sense of responsibility, not the pursuit of power, the state-owned news site EgyNews reported.

Ashton arrived in Cairo on Wednesday for a two-day visit to monitor the political situation ahead of the first round of presidential elections, slated to start in May. She also met with interim President Adly Mansour and Foreign Affairs Minister Nabil Fahmy.

A meeting with presidential candidate Hamdeen Sabbahi was also on Ashton’s schedule, but he was reportedly unable to attend due to other engagements.

After months of anticipation, in March Sisi confirmed his intent to run for president and resigned from his position as defense minister.

In their meeting, Ashton reportedly told Sisi that the world was watching both Egypt and the man who would lead it in the right direction during the coming period, according to EgyNews.

The policy chief also reportedly called Sisi’s decision to run for president both “difficult” and “brave,” given the challenges Egypt is facing.

While the EU supports the choice of the Egyptian people and hopes for the return of stability and the rule of law, it would also watch the electoral process carefully, she continued.

Ashton visited Egypt last July, voicing her concern over the military-backed interim government’s crack down on the Muslim Brotherhood in the aftermath of former President Mohamed Morsi’s ouster. During that visit, she met with Sisi and Brotherhood leaders in a reconciliation effort, and also met with Morsi, who was detained in an undisclosed location at that time.

The EU delegate returned to Egypt in October, when she met with officials and Brotherhood members as she continued to monitor the unfolding situation.

In December, the Muslim Brotherhood was banned and designated a terrorist organization, and no longer plays an active role in the political arena.