The anniversary of tension: Blog 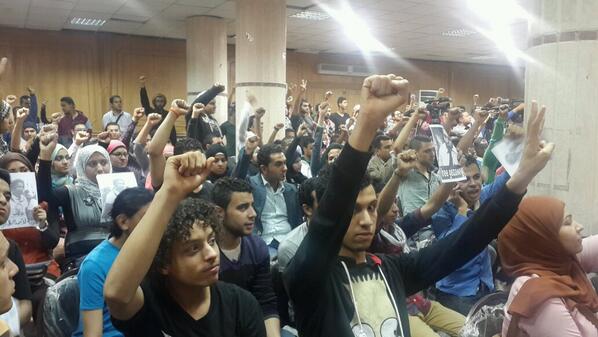 For no discernible reason, attendees of the April 6 Youth Movement presser were made to wait outside the Lawyers Syndicate building before it started, where they were serenaded by a concerto of car horns from furious car drivers.

A middle-aged man in a cardigan came out of the syndicate and demanded to know why these youths were assembled, addressing no one in the tone of a man who believes that they should be engaged in some fruitful activity, or not exist at all. He then went and harangued them up close.

Another man appeared and asked, apparently seriously, what yesterday, April 6, was the anniversary of.

A tiny, filthy girl in boy’s clothing sauntered past, two bits of her hair tied together at the front. They resembled baby goat bumps. Five minutes later a woman appeared and enquired whether anyone had seen a small girl. Improbably, she found her. The next time the girl appeared she was pushing a cardboard box almost as tall as she was into the legs of April 6 members and smiling demurely.

We were finally granted entry to the syndicate, whose premises are an oppressive courtyard type area squashed in by ugly prefab constructions and the looming, multi-story presence of the Journalists Syndicate next door. The usual peeling stickers announced yesterday’s battles in faint voices, including one from the Tagammu Party demanding that we say no to terrorism and vote yes for the constitution of the revolution.

April 6 members filed excitedly into the hall. Given the average age, the scene resembled a university lecture theatre. Proceedings began with music, blared out on the sound system. Fists were raised in the air as the sound of an emotive piano filled the room. Spirits were high, and so was the microphone volume.

As is often the case with anniversaries, the event was largely an exercise in self-congratulation and about sending a message to the state — and the public — that, screw you, April 6 is still here six years later.

In 2008, they called for a day of nationwide civil disobedience to coincide with a labor strike in the Delta town of Mahalla. Mahalla exploded into two days of clashes between the police and residents, and produced an iconic image captured by photographer Nasser Nuri of a Mubarak poster being ripped down and stomped on.

I often wonder what would have happened to April 6 had Mahalla not erupted. The response to its call in Cairo was far more muted. There were the usual arrests of prominent members but otherwise the streets were eerily empty, largely as a result of the state propaganda machine going into action and denouncing them as traitors and enemies, a theme it continues today.

In the years that followed, April 6 remained a useful — albeit tiny — thorn in the regime’s side, and they played a vital role in opening up small bits of public space to protest when other groups were absent. Some of their members have paid a great price for their activism and continue to do so: Today, the appeal of Mohamed Adel and Ahmed Maher against the politically driven three-year prison sentences handed down to them was rejected.

April 6 sums up what is wrong, and what is right, with Egypt’s political opposition. They are a group of highly motivated young people working towards a vaguely defined goal. They are plagued by in-fighting, and have split into two fronts as a result. Their presence has been amplified by both social media and state vilification, the latter of which has worked both for and against them.

In six years, their activism has not matured, and largely still revolves around street action organized in reaction to the latest outrage committed by the state. Yesterday, when the organizers (very sensibly) called off the march they had planned to avert the inevitable blood and arrests, the kids did a bit of chanting on the steps of the Journalists Syndicate and then (God help us) some street theatre entitled, “The verdict after the phone call.” In an act of painful symbolism they released some doves, half of which could not fly and dropped down back to earth. And then everyone went home.

State repression of the political opposition works in part through distraction, by forcing opponents to lurch from crisis to crisis and never giving them the time and space to think ahead, to formulate, to plan. Energies are invested in avoiding arrest or freeing detained members, or responding to some egregious state action rather than formulating a long term strategy. There is no breathing space and, politics — if any is involved at all — is squeezed in between trips to the prosecutor’s office and prisons, or trying to convince the public that they are not spies or traitors or masons.

And so all that youthful enthusiasm gets thrown into street action, into rumbles with the police, into the transitory thrill of short lived dominance over the oppressor — much to the ire of people like that man in the cardigan outside the Lawyers Syndicate.

In a country of grim, relentless realities it was always going to be easy to derail the revolution and its promises. Patience is difficult on an empty stomach, and familiar misery has proven to be more acceptable than a shaky pledge of something better. The army couldn’t lose when it took over after June 30, and delivered that now familiar brand of robust, clumsy instant “fixes.”

The killings and the mass detentions are apparently justifiable when in the context of another promise — the Muslim Brotherhood stopped in its tracks, the million nightmare scenarios of former President Mohamed Morsi’s continued rule an imaginary ballast for the ship.

But who said revolutionaries are the only dreamers? The military has promised us a cure for incurable diseases that has met with, to say the least, skepticism from the scientific community. Army supporters, however, lauded the military. Dreams of social justice and having enough to eat will always be more fantastical than the most ludicrous of science fictions.

AD
You Might Have Missed
Where do old lesbians go to die?
Carbon Colonies & A Green New Deal
What we talk about when we talk about trees
Mugamma revisited: Reimagining the building and the square
AD
Sarah Carr
28 articles on Mada